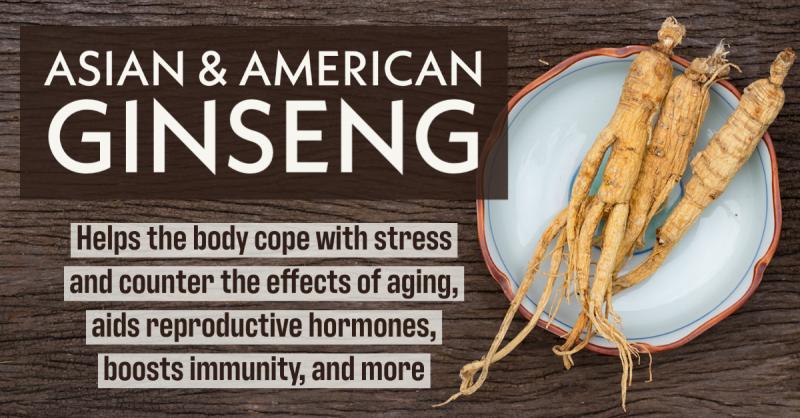 Ginseng is one of the most highly prized herbs in both the Old World and the New World. In the Orient, Asian ginseng (Panax ginseng) has been dubbed the king of tonics and in North America, some native American tribes spoke of American ginseng (P. quinquefolium), as grandfather ginseng, the leader of the tribe of medicinal plants. Ginseng has earned these titles because it is a powerful tonic that helps to counteract the effects of aging in both men and women. The Latin name Panax comes from the root panacea, which means a remedy for everything.

Both types of ginseng act as tonics and adaptogens, which means they can help to strengthen the body overall and help the body cope with stress. Ginseng seems particularly adept at helping normalize body function with age. In fact, on both continents, ginseng was primarily seen as an agent to counteract the effects of aging in elderly people. Ginseng was generally not given to children, teens, young men, or women. We’ll start by focusing on properties common to both species of ginseng and then note some differences. 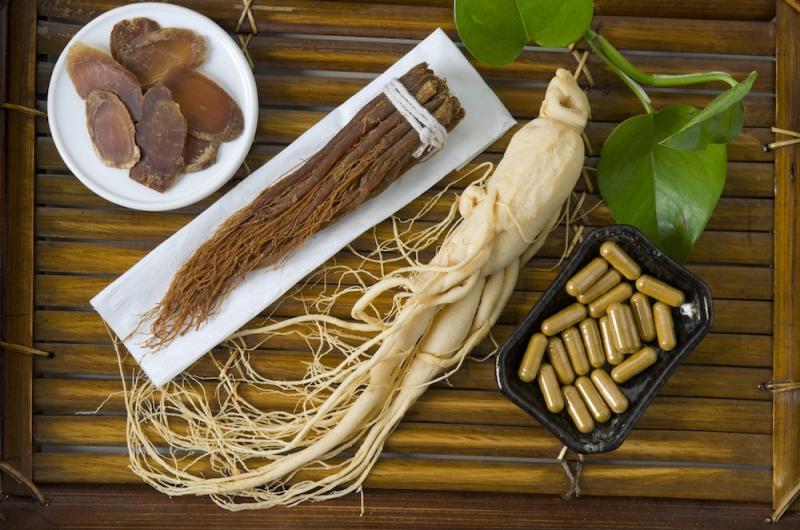 Ginseng helps to normalize many body processes. For example, it can help to reduce high blood pressure and raise low blood pressure. It can also help to balance both high and low blood sugar levels. The adaptogenic effects of ginseng aid a wide variety of mental and physical processes as suggested by various studies.

For example, students taking rigorous tests found they could pay attention better, had higher scores on mental arithmetic and logical deduction and felt improved brain and body function after taking ginseng. Mice who were fed ginseng were able to swim longer in cold water than mice who had no ginseng. Nurses working the night shift found they were more alert during work. Studies also found that radio operators transmitted text faster and with fewer mistakes while they were taking ginseng. These are examples of how an adaptogen, like ginseng, can counteract the effects of stress. 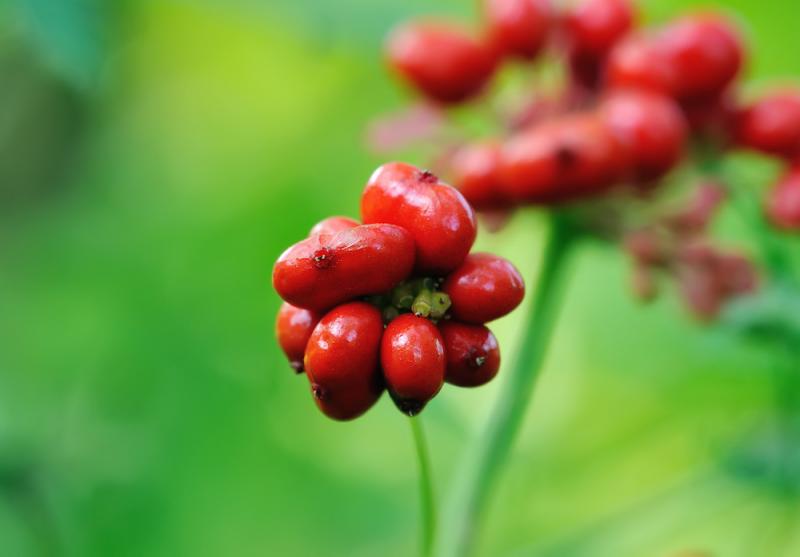 Ginseng contains saponins which have a hormonal-like quality and work to improve the function of the adrenal glands for men and women. For example, women suffering from the beginning stages of menopause were given ginseng on a regular basis. They experienced an increase in estrogen which eliminated the need for hormone shots.

Ginseng is also reported to increase sexual vigor. In this regard it is primarily seen as a sexual tonic for men, helping to boost testosterone levels. Asian ginseng has a stronger reputation for this than American ginseng, but both may be helpful for loss of drive and erectile dysfunction in men.

Other Properties of Ginseng

Ginseng has been shown to enhance immunity. Research shows that it stimulates the white blood cells which filter toxins from the blood and lymph. Ginseng also enhances killer cell and antibody activity.

Taking ginseng often brings an overall feeling of well-being and may relieve insomnia and depression. Studies show this herb stimulates cell growth and keeps cells alive longer. Ginseng helps to prevent and aid memory loss in older people by speeding up the brain processes. It also tends to boost energy levels, especially in the elderly. 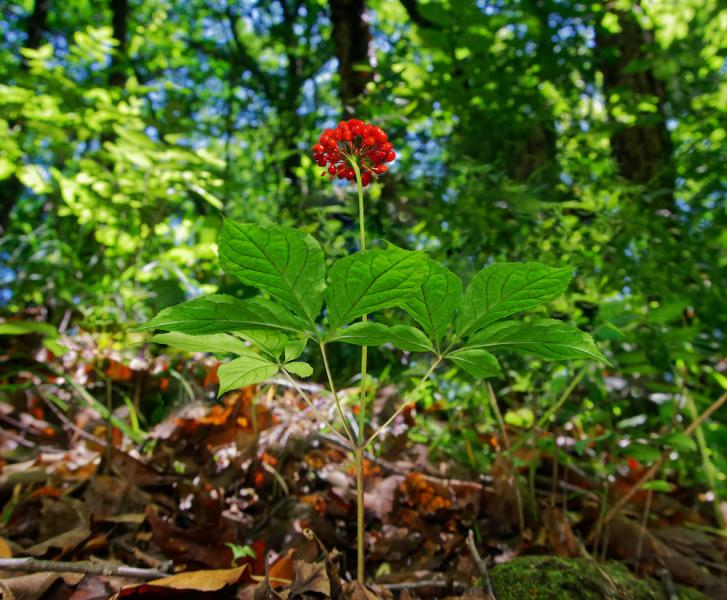 So, which ginseng should you take, American or Asian (which is also known as Korean ginseng)? The Chinese see a slight difference in the action of these two plants. American ginseng is more of a yin tonic, which means it has a more cooling and moistening effect, while Asian ginseng is a more yang tonic, meaning it has a more heating and drying effect. Asian ginseng is also procesed to make a more warming remedy, Korean red ginseng. So, if you tend to have a cooler body temperature, with clammy or moist skin, the Asian or Korean ginseng would be better. If you tend to be hotter, with flushed red skin and dry skin, eyes, and mouth, American ginseng would be the better choice.

One of the problems with ginseng is that it’s been all but destroyed in the wild. Most ginseng is cultivated, which may involve the use of fungicides or other chemicals. You can obtain woods-grown or wild-crafted ginseng in America, but it’s more expensive than the commercial product. Still, since you only need perhaps 10-15 drops a day, that’s not bad.

Good luck finding wild Asian ginseng. When I was in China in the 1980s, I saw some wild-harvested ginseng roots on sale for thousands of dollars and it hasn't gotten any cheaper since then. So, if you're like me, wild Asian ginseng is going to be too expensive to use, so you'll want to use the cultivated herb. Many Chinese formulas contain small amounts of ginseng as a catalyst and tonic, which is one of the best ways to use it. 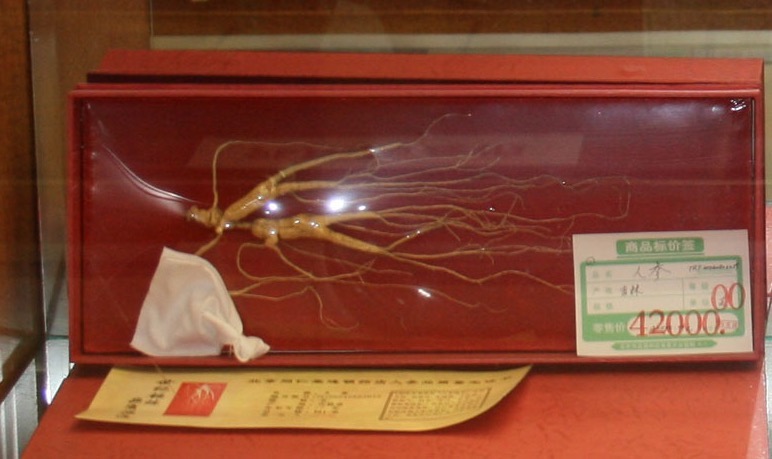 It doesn’t take a high dose to get the benefits of ginseng. Generally, with Asian ginseng, one to two capsules per day is enough. For American ginseng, the dose is even smaller. The most you should take is one capsule and it’s better to use a tincture, taking only 10-20 drops a day.

Ginseng is not a good remedy for young children or teenagers unless they are suffering from weakness or prolonged illness. Even in those cases, it is best used in combination with other herbs for younger people. Its best use is as a remedy for people middle-aged and up who are under stress or having problems with fatigue and general illness.