A powerful soothing and moistening tonic in both Eastern and Western herbalism - January 18, 2021 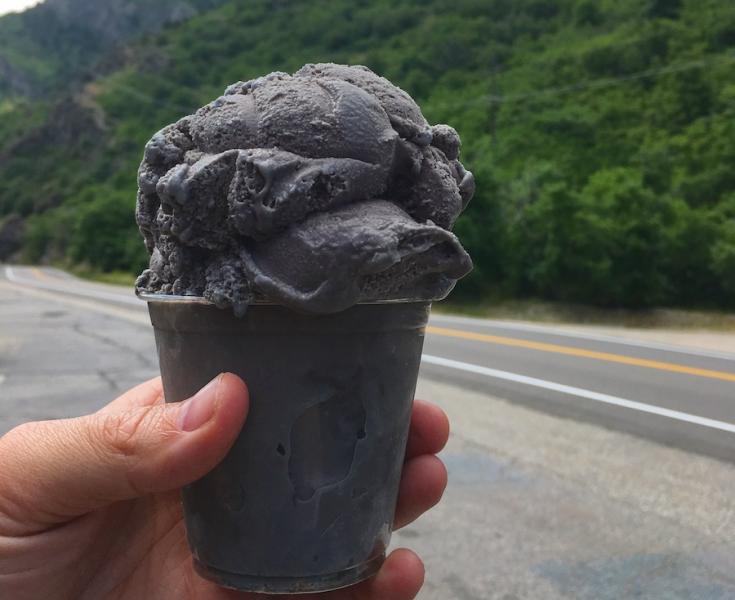 When I was a child there was an ice cream parlor a half-block away from where I lived. The ice cream there was just ten cents a scoop, so you could get a triple scoop ice cream cone for thirty cents. Those days are long gone and it’s hard to find one of the ice cream flavors I liked most back then, licorice.

Licorice root is a naturally sweet herb from the pea family that has been used in both Western and Eastern herbalism for thousands of years. The sweetness of licorice is primarily due to a compound called glycyrrhizin, although the root does contain sugars—glucose, mannose and sucrose. Licorice is about 50 times sweeter than sugar, which makes it a handy flavoring agent in liquid herb formulas. 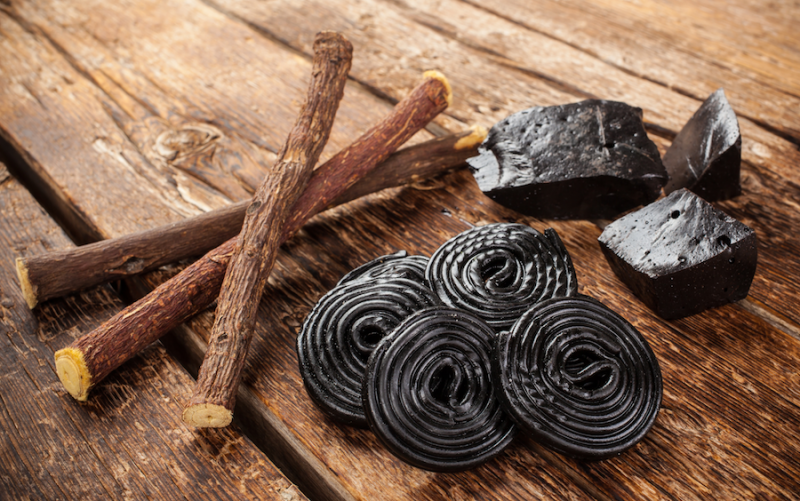 One of my favorite uses for licorice root has been to help stabilize blood sugar levels and kill the cravings for sugar. I’ve recommended it to parents to help cure the sweet tooth in their children and I have given it to people who suffered from hypoglycemia (low blood sugar). You might think of it as the candy that actually helps you crave less sugar. I’m not sure how it works to stabilize blood sugar, but on a purely experiential level I’m very confident that it works.

While metabolic syndrome and diabetes are a result of high blood sugar levels, there are also problems when blood sugar levels dip too low. Blood sugar levels naturally dip down when someone hasn't eaten for a while, or in the early stages of fasting. Normally, once the body has used up most of the sugar in the blood, a hormone called glucagon pulls glycogen stores from the liver to bring the blood sugar back up.

The problem is that when people eat a lot of simple carbohydrates they have high insulin levels which inhibit the release of glucagon. So the body isn't able to stabilize blood sugar levels and they drop too low. This results in a sudden feeling of fatigue and difficulty concentrating and thinking rationally. Someone with hypoglycemia may also experience dizziness, weakness, a cold nose or fingers, and sudden mood changes like anxiety or irritability. They will also crave sugar.

I generally suspect that people who experience an energy slump in the mid-afternoon and have cravings for sugar (and sometimes caffeine, too) have problems with hypoglycemia. I often recommend they take two capsules of an algae blend containing spirulina, blue-green algae and chlorella along with two capsules of licorice root at breakfast and then again at lunch. If they experience the mid-afternoon slump I tell them to take it again around 3:00 in the afternoon. (As I'll explain later this program should be avoid by people with high blood pressure.) 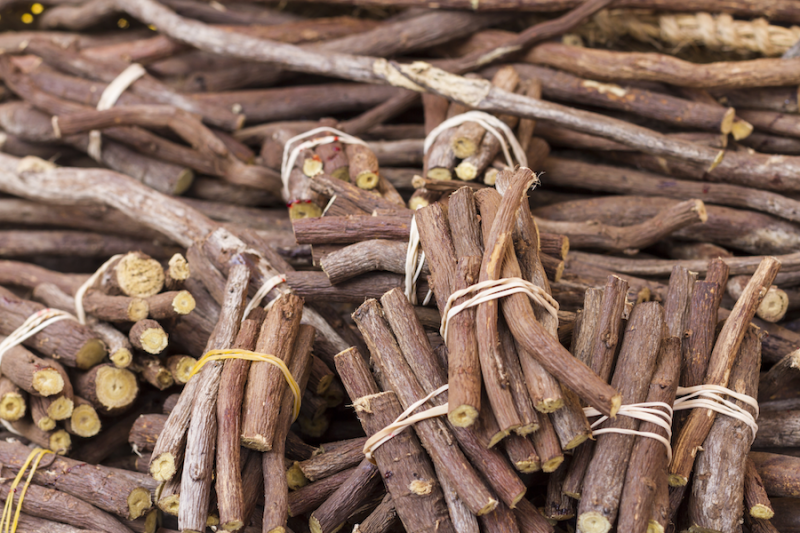 I've observed that many people who are labeled as mentally ill often have what I called reactive hypoglycemia. That is, they are prone to sudden drops in blood sugar that cause them to lose the ability to think rationally. I’ve used licorice root to help stabilize their mind and mood and found it to be very effective. Let me share two stories with you.

My mother suffered from mild schizophrenia. Under stress, she would sometimes snap and start babbling irrational things. This was very frightening to me as a child, but as an adult, I came to understand that my mom had serious blood sugar problems. I learned she was predisposed to this from reading her eyes using constitutional iridology.

I got my mom to adopt a healthier diet, eating less sugar and simple carbohydrates and more vegetables and protein. Today, I’d call this a low glycemic diet. I also had her take a supplement containing B-complex, vitamin C, and a few nervine and adaptogenic herbs. Together these really helped stabilize her mood.

One day she called me on the phone and was babbling nonsense. For a moment, the child in me cowered, but I got a hold of myself. I kept saying, “Mom, Mom,” until I got her attention. Then I said, “Go take some licorice root extract and call me back.” About three minutes later, she called me back and was rational again.

Another Story Using Licorice with Hypoglycemia 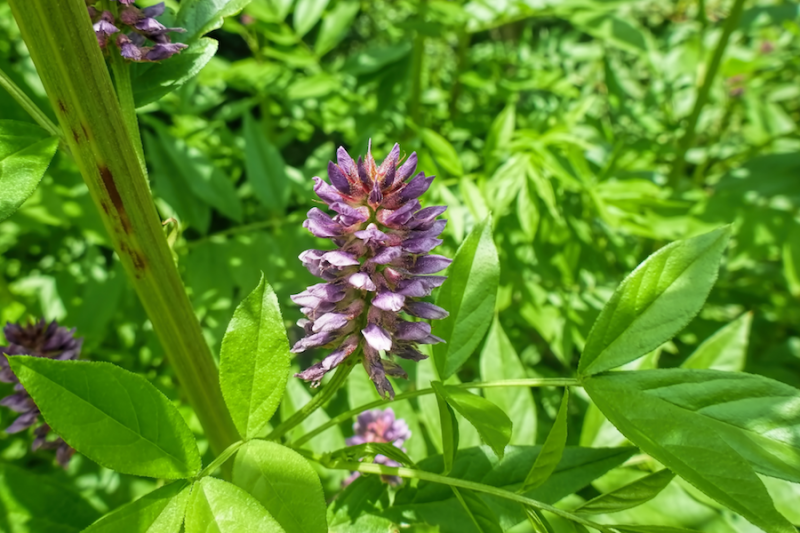 On another occasion, I had been working with a woman in my neighborhood who was suffering from mental health issues. I had been urging her to avoid sugar and caffeine and eat a healthier diet as well as providing her with a few basic supplements, including calcium, magnesium and B-complex. It was helping her feel more mentally and emotionally stable.

One day she showed up at my house sobbing hysterically with another woman who said, “She asked if she could see you. Is that OK?”

I said, “Sure.” and led my neighbor into the kitchen where I gave her some licorice root (I believe it was about a half teaspoon). She told me, “Be careful, this is my therapist.” I nodded and led her to the other room where I told her to “Breathe with me.” I had her slow down her breathing and within two minutes she was completely rational again.

Her therapist looked at me with a puzzled look that said, “How did you do that?” Answering her unspoken question I told her how slowing your breathing helped calm the mind, but I never told her about the licorice root because I knew that she had already told my neighbor not to waste her money on those supplements.

How Does it Work? 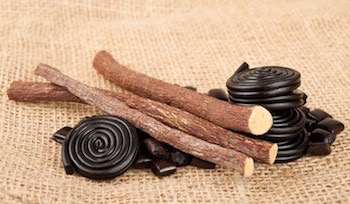 I have no idea how licorice helps raise blood sugar when it’s low. Although I’ve never found any research to back it up, I suspect it may have a glucagon-like effect.

We know that licorice acts on the adrenal glands and has cortisol and aldosterone-like effects. The cortisol-like effect gives it an anti-inflammatory action, which makes it helpful for various chronic inflammatory diseases. I use it sometimes to help wean people off of corticosteroid drugs. It can be helpful in certain autoimmune diseases like lupus for this reason.

The aldosterone-like effect is where licorice can be problematic for some people. Aldosterone helps with fluid retention in the body. Higher levels create sodium retention and edema and can also raise blood pressure. This is why you should avoid it if you have high blood pressure. The effect doesn’t occur in small doses but can occur in the dosage range of 700 to 1,400 milligrams a day. So if you have a 500 mg. capsule, that means that somewhere around two or three capsules a day could be problematic. There is no concern however when licorice is a minor ingredient in an herb formula.

In a workshop I attended, Amanda McQuade Crawford said that you could counteract this negative effect of licorice by increasing potassium levels. She said that if you mix dandelion leaf, a mild, potassium-rich diuretic, with licorice people will be able to take it without suffering these effects. I've tried having people take potassium or dandelion leaf with licorice and it does help keep the blood pressure down.

To avoid blood pressure problems deglycyrrhizinated licorice is available which does not have the aldosterone effect. Unfortunately, I find this removes some of its anti-inflammatory properties, so I personally prefer regular licorice when I can.

A Moistening and Cooling Tonic 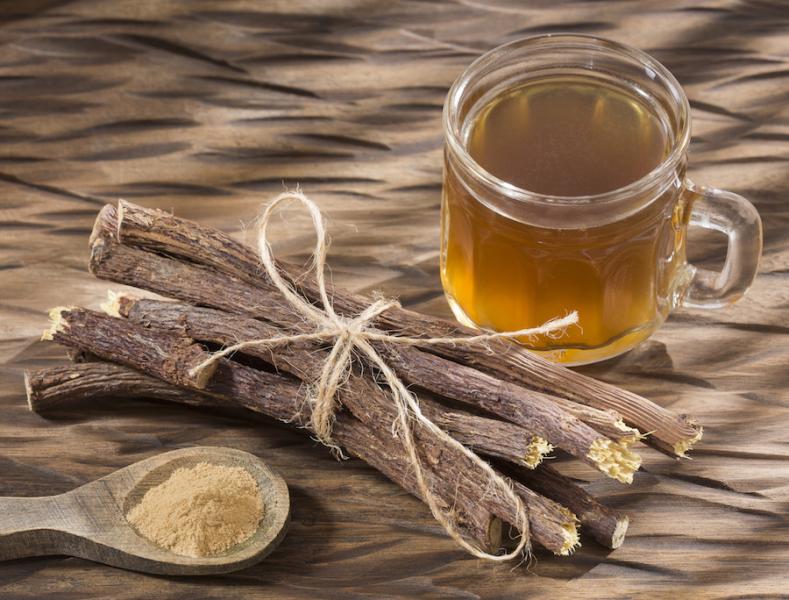 Licorice is a good herb for tissues that are irritated, hot or red and also dry. For instance, it’s a great remedy for a dry, scratchy sore throat or a dry, hacking cough. You can suck on the powder or sip it as a tea to coat and soothe the throat. It also makes a good remedy for bronchitis with a dry, unproductive cough.

Licorice is a good remedy for ulcers and other irritations of the mucus membranes like gastritis and irritable bowel syndrome. It combines well with chamomile for this purpose.

Licorice may also be helpful for inflammatory liver disease. It is mildly antiviral and has hepatoprotective properties.

I consider licorice root to be a mild adaptogen and adrenal tonic. It is helpful for thirst and fatigue. Hannibal’s troops chewed it while crossing the Alps. 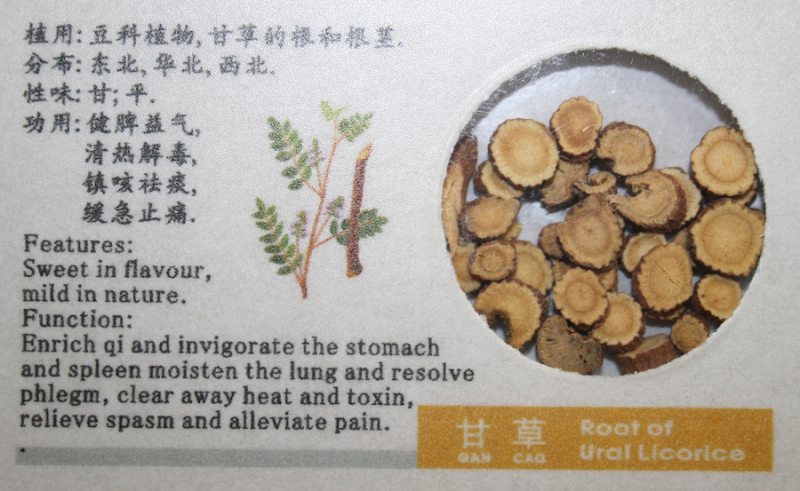 One of my early experiences with licorice involved energy. I was on an exhausting three-and-a-half week tour of the United States in 1986, participating in a meeting six nights a week in a different city. I still had over a week to go and was feeling completely worn out. Someone recommended I take licorice and an adaptogenic formula called GGC, which contained gotu kola, eleuthero (then known as Siberian ginseng) and capsicum. One capsule of licorice and two capsules of GGC three times daily and I not only finished the tour without feeling tired, my energy actually picked up.

The Chinese say that licorice enters all twelve meridians of the body and helps to balance the entire body. For this reason, many Chinese herb formulas contain a small amount of licorice, which is supposed to act as a catalyst to help the whole formula work better.

If you want a fun way to take licorice, you can take some real licorice candy (although make sure it actually contains licorice, since they often use anise to produce a licorice flavor). You can also try some licorice ice cream. I buy it when I can find it and I really like it because it’s the one flavor no one else in my family will touch, which means I can keep it in the freezer and have some once in a while without everyone else eating it. If you don’t like the taste, however, you can always stick to the capsules.