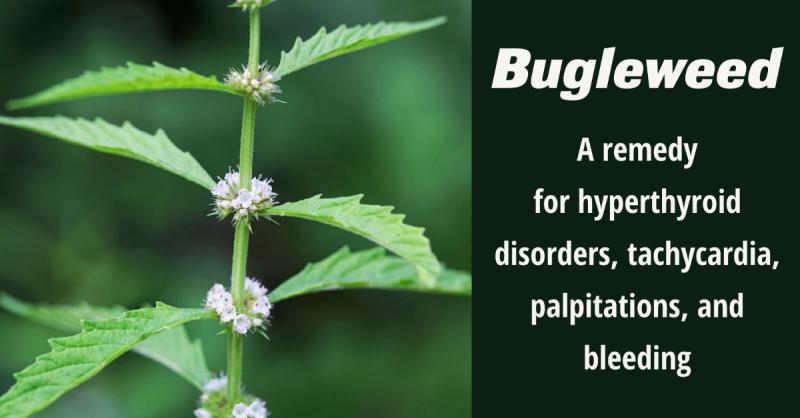 When speaking, professional herbalists often refer to herbs by their Latin names because entirely different species of plants can share the same common name, while the Latin name refers to only one species. Bugleweed is an example of this. There’s a garden flower known as bugleweed, Ajuga reptans, which is often grown as a groundcover, but the plants used medicinally belong to the Lycopus genus.

Lycopus is a genus of perennial mints native to North America, Europe, and Asia. The species commonly used commercially is Lycopus virginincus, although other species of Lycopus, like L. americanus, (pictured above) have also been used medicinally. There's also a European species, L. europaeus, commonly known as gypsywort, which has similar uses. The rest of the pictures in this article are of this European species. When talking about bugleweed in this article it is referring collectively to the uses of L. virginincus, L. americanus and L. europaeus.

Plants in the Lycopus genus typically grow in marshy or wet areas. The juice of these plants produces a black dye and some Native American tribes used the starchy rhizomes as a food source. They are generally bitter, sedative, and hemostatic. 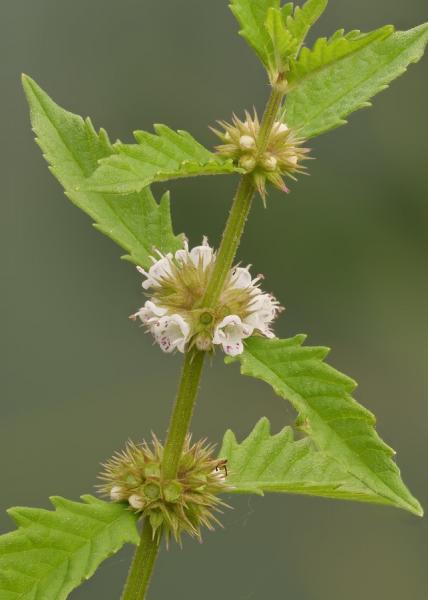 Bugleweed is widely used in modern herbalism to calm a hyperactive thyroid. I think of the thyroid as being the gas pedal of metabolism. When the thyroid is low, metabolism is slow, typically resulting in fatigue, cold extremities, and weight gain. Conversely, when the thyroid is running high, metabolism is overstimulated. The person tends to lose weight, often experiences tachycardia (rapid heartbeat) and palpitations, and becomes high-strung, nervous, and restless.

Bugleweed is used to regulate a hyperactive thyroid gland because it contains compounds that bind to receptors for TSH (thyroid-stimulating hormone) thus reducing stimulation to the thyroid and lowering the output of thyroid hormones. It also helps to prevent antibodies from attaching to the thyroid, which is helpful in Grave’s Disease, an autoimmune hypothyroid condition. In addition, it helps to slow the pulse and normalize heart rate, reducing tachycardia and palpitation.

Typically, I’ve used it as part of a formula, which also contains lemon balm and motherwort. Lemon balm also lowers the output of thyroid hormones and calms the nervous system, while motherwort helps reduce rapid heartbeat and palpitations. This isn’t a cure for hyperthyroid, but it is certainly helpful for reducing symptoms while one works on the underlying causes of the hyperthyroid condition.

Matthew Wood offers some mental and emotional indications for bugleweed that match the personality traits of people with hyperthyroidism. Cartoon characters that have their eyes pop out in shock probably could use some bugleweed. Bulging eyes is one of the indications of hyperthyroid, but it is also an indication of a high state of shock or nervousness.

Matthew Wood says a person who needs bugleweed is fearful and driven, like an animal being hunted. Their eyes are wide, open, and staring. They are unable to relax, which makes it difficult to sleep. Michael Moore says that L. americanus is a strong but not druggy sedative, meaning it produces few other symptoms besides relaxation. Like many mints it appears to act primarily through the nervous system, having a relaxing influence on the heart, blood vessels, lungs, and digestion.

I think that a person’s personality and emotional state tend to contribute to the development of the diseases to which they are prone. A restless, driven personality is more likely to develop hyperthyroidism as they are always nervous and pushing themselves. With its sedative action, bugleweed can help anyone who is like this, even if they haven’t developed hyperthyroid. 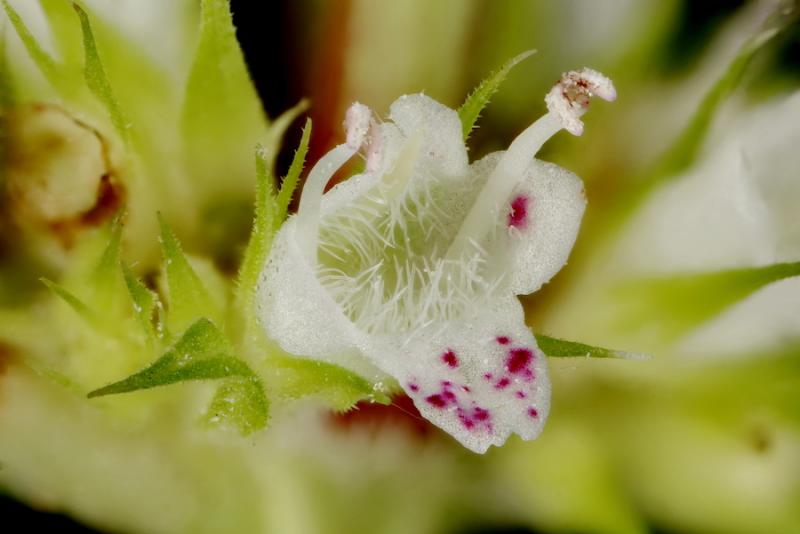 Bugleweed is helpful for controlling bleeding. It can be used to help control nosebleeds, heavy menstrual bleeding, bleeding hemorrhoids, and so forth. It can also be used topically for injuries and snakebites.

Bugleweed also has an affinity for the lungs. It has been used to treat coughs and many other respiratory ailments such as tuberculosis, bronchitis, and asthma. Bugleweed also appears to aid cardiopulmonary circulation.

In using bugleweed, the fresh plant works best, as the dried herb is less potent. So, it’s best if you can make or purchase a tincture made from the fresh herb, harvested just before or right after it starts to bloom.