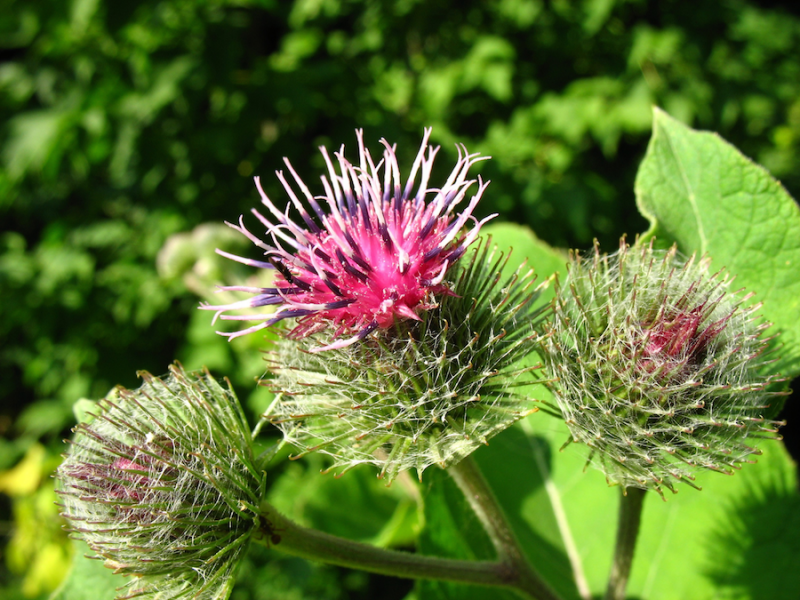 Autumn is the best time of the year to harvest most herbal roots, especially biennials like burdock. A biennial is a plant that lives for two years. During the first year, it produces only leaves and gathers energy and nutrients in the root. During the second year, it produces flowers, fruits, and seeds, using up the stored energy and nutrients of the root. Examples of biennials include carrots, beets, turnips, mullein, and burdock.

The first-year burdock plant produces a ring of leaves growing close to the ground (pictured below) called a basal rosette. If you want to harvest burdock roots, you need to look for these basal rosettes and dig them up before the frost.

In the second year, burdock produces its flowers (shown left), which are composites, meaning there are many small flowers in each flower head. The fruit is the burr, which houses the seeds. The prickly burs are known to hitchhike on animals and people alike. The burs became the inspiration for the invention of the hook and loop system used in Velcro. 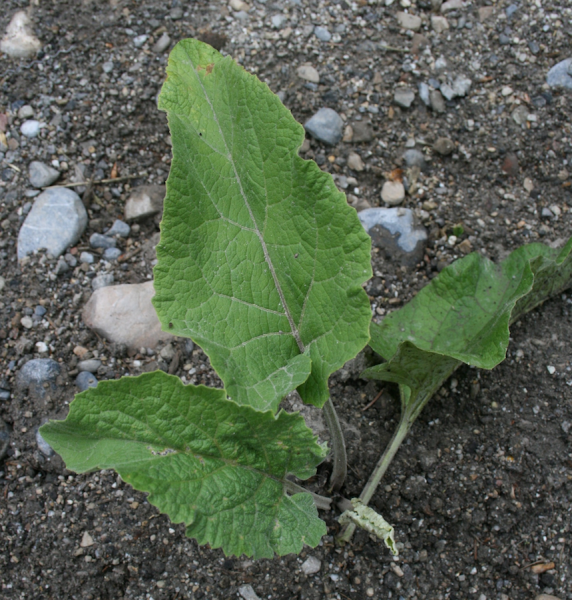 Burdock may often be seen as a weed, but it’s actually a food. Native Americans ate the roots, just like carrots or beets, and it’s still consumed in Asia. In Japan, it’s called gobo. Burdock became internationally recognized for its culinary use in macrobiotic diets in the latter half of the 20th century. It contains polyphenols that form tannin-iron complexes that give its dark, muddy color. These compounds also give it a flavor that makes it an ideal ingredient in miso soup.

Burdock illustrates the idea that there is not a clear line between herbal foods and herbal medicines. Many popular herbs have been used as both. In fact, I’ve often wondered if part of the reason we get sick is that we don’t eat more wild foods like burdock and dandelion. 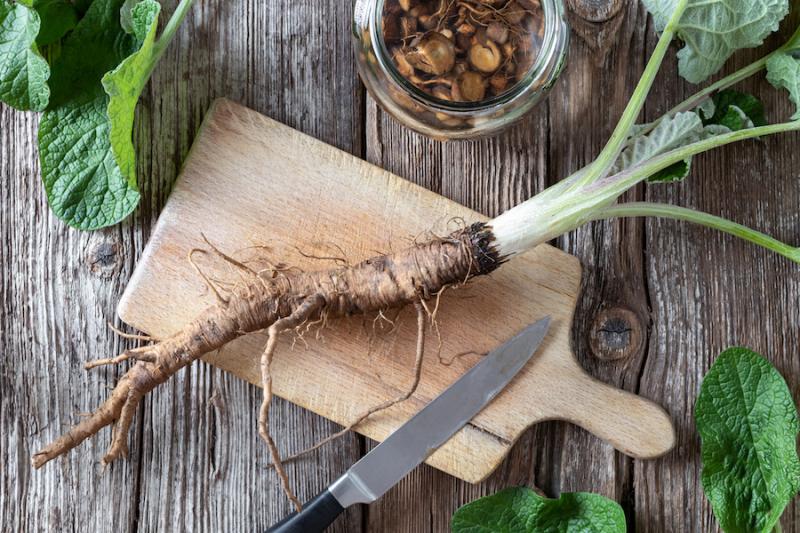 Masanobu Fukuoka, a retiree from the Japanese Ministry of Agriculture, famous for his developments in permaculture, a form of gardening where food is raised in a semi-wild manner, felt that edible herbs and wild vegetables were higher in nutritional value than our current cultivated vegetables. In his book, The One-Straw Revolution, he says:

Edible herbs and wild vegetables, plants growing on the mountain and in the meadow, are very high in nutritional value and are also useful as medicine. Food and medicine are not two different things: they are the front and back of one body. Chemically grown vegetables may be eaten for food, but they cannot be used as medicine. [The One-Straw Revolution Masanobu Fukuoka. Emmaus, PA: Rodale Press, 1978. p.100] 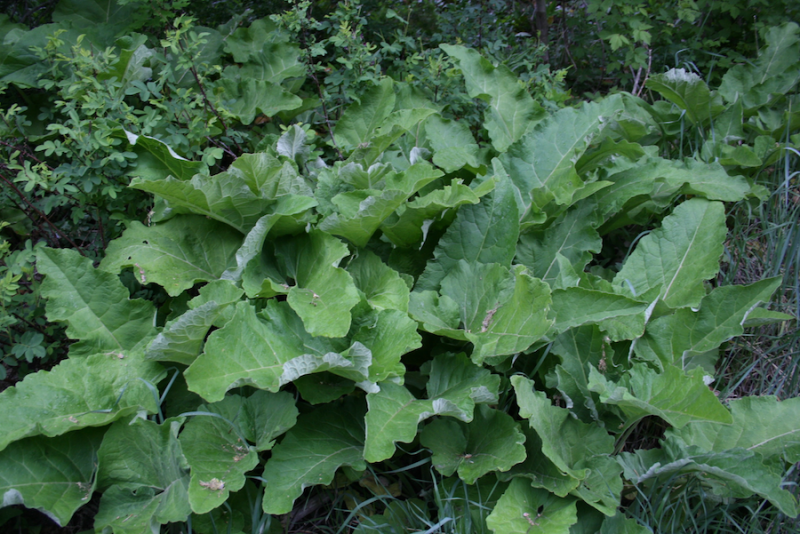 Burdock belongs to a class of herbs known as alteratives or blood purifiers. The term alterative came to us from the Eclectic physicians of the late 19th and early 20th centuries. They claimed these herbs removed torpor, a swampy, congested condition of the tissues we call stagnation in our energetic system. I like to think of these herbs as swamp drainers for the body. They help remove waste via the lymphatics, liver, and kidneys to clear up cysts, boils, acne, and skin conditions like eczema and psoriasis.

Burdock, like many other members of the Asteraceae or Aster family, contains inulin, an oligosaccharide that feeds the friendly flora of the digestive tract. It also contains mucilage which soothes the bowel. So, it helps to improve immune function via the GI tract.

Alteratives like burdock are helpful in clearing up the morbid conditions that lead to cancer. The famous medieval herbalist, Hildegarde of Bingen, used burdock for treating tumors and burdock is a key ingredient in many traditional anticancer formulas. It is a primary ingredient in the Hoxsey cancer formula, Essiac, and Jason Winter’s anticancer tea.

Burdock contains a number of compounds with known anti-cancer activity, including arctigenin, arctiin beta-eudesmol, caffeic acid, chlorogenic acid, inulin, lignin, and trachelogenin. Arctiin has been identified as the ingredient that acts as a diuretic and as a preventative for angiogenesis, the formation of auxiliary arteries that feed tumors. In spite of all this, I would not consider burdock a stand-alone remedy for cancer. Its primary use is to clear up the morbid conditions in the body that underly the development of cancer. You need other, more specific herbs, to address the cancer cells themselves. 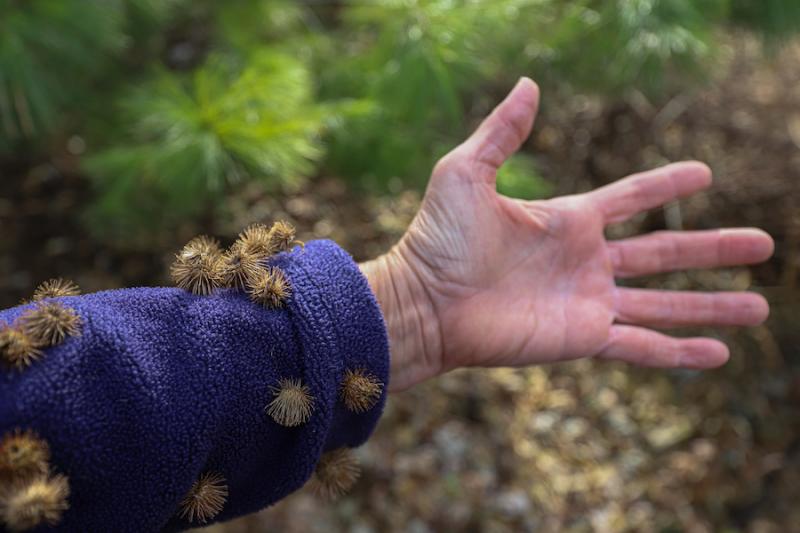 Although the root is what is primarily used in commercial herbalism, there are uses for the leaves, as well as the seeds and fruits, the stuff that clings to fur and clothing. The leaves can be crushed and applied topically to ease itching, burns, rashes, psoriasis, eczema, and other skin conditions. The leaves are a diuretic and can be made into a tea to reduce edema and to soothe an irritated digestive tract. The young leaves are also edible.

The fruits are used in Chinese medicine to aid the lung and liver meridians. They are used to open the lungs, reduce swelling, detoxify the body, and ease sore throats. Western herbalists primarily use the seeds as a diuretic.

Burdock is one of those remedies that is hard to pin down precisely because it has such broad health benefits. I've used it as a key herb in blood purifiers and anticancer formulas, and a supporting herb in liver, diuretic, and blood sugar formulas. There are also some good indications where burdock would be a good single remedy. 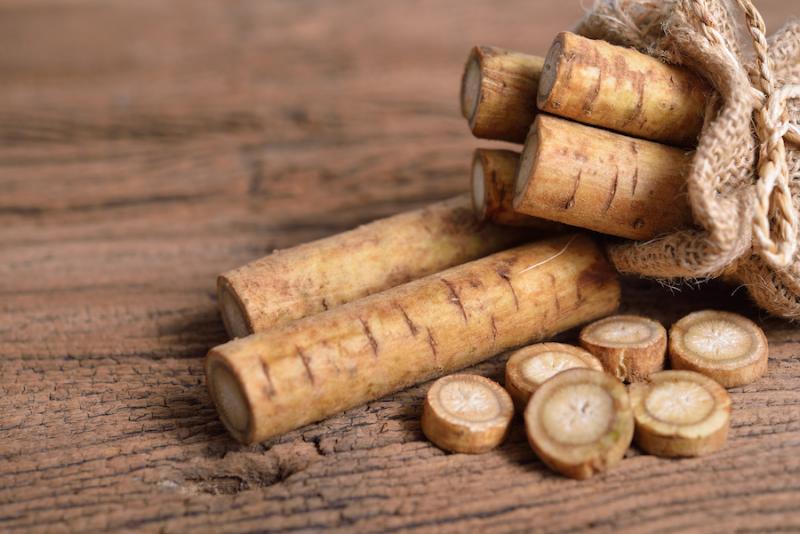 First, it has a bit of an oily nature, which makes it good for skin conditions where the skin is dry and irritated. It appears to aid the metabolism of fats in the liver to help lubricate dry skin. Here burdock can be used both internally (the root) and topically (the leaf) to reduce inflammation, cool, soothe, and moisten the skin.

Second, burdock has been used for arthritis and rheumatism. Dorothy Hall suggests burdock is specifically helpful for people who have pain in the lower part of their body—the lower back, pelvis, and legs. This pain may be due to standing for long periods and not walking enough, as the pain improves with movement. The signature here is that burdock is a hearty plant with a strong upright growth pattern, suggesting it can help a person stand up straight without pain.

In general, I would recommend burdock for any kind of toxic accumulation in the body, such as cysts, boils, swollen lymph nodes, and tumors. Here I would use the root internally as part of an alterative formula containing herbs like red clover, yellow dock, and cleavers, but you could also apply either the root or the leaves topically.

However you use a plant, It is important to know when to harvest each part if you want it to work properly. I remember trying to dig up and eat a burdock root in my teens but found it pithy and unappetizing. In retrospect, it was probably because I was digging up a second-year root. Now, I know better. Fortunately, burdock is useful for both parts of its growing cycle. You can use the first year leaves and roots for food and medicine, and in the second year, you can use the roots and fruits.