If you've ever heard someone call a remedy "snake oil" to condemn it as fake or unproven you might be surprised to learn it got its start with echinacea. In the 1880s Dr. H.C.F. Meyer patented remedy for snake bites with echinacea as the primary ingredient. He sold it as a cure-all, claiming to have used it to cure over 600 snakebites.

Because of the way it was promoted, the famous leader of the eclectic medicine movement, John Uri Lloyd, refused to believe the remedy had any value and considered it quackery. He later said, “My own delay in its general introduction is to me now a subject of self-criticism.” I think this same type of thinking prevents the medical community from seriously examining many effective herbs and natural remedies.

Fortunately, echinacea's medicinal value is now backed by many scientific studies. No single constituent has been found to be responsible for Echinacea’s effects, which appear to be due to a synergy of many constituents. These constituents include the following.

Immune-stimulating polysaccharides: These are large sugar chains that the body doesn't digest or use for fuel. Instead, they activate the innate immune system, enhancing the activity of macrophages. Echinacea purpura contains arabinogalactan, an immune stimulant that enhances inflammatory cytokines and increases macrophage activity. There are also immune-stimulating glycoproteins in echinacea.

Alkamindes: These compounds are responsible for the biting, tingling sensation in echinacea's taste, which is especially pronounced in Echinacea angustifolia. They exert anti-inflammatory effects and aid wound healing. It has also been recently discovered that these compounds are phytocannabinoids with affinities for the CB2-receptors in the endocannabinoid system. The endocannabinoid system helps regulate inflammation and balance immune reactions. These alkylamines are primarily found in the roots and flowers and work synergistically with the other compounds in echinacea that boost the immune response, regulate inflammation, and fight infection.

The Plains Indians used Echinacea angustifolia as a source of medicine for hundreds of years. They applied it to wounds, stings, and bites of all kinds. In addition, they used it as a mouthwash to treat sore teeth and gums, and they drank it to cure colds, measles, mumps and arthritis. American settlers moving west in the 1800s discovered some Native Americans, like the Kiowa tribe, who chewed on the root and swallowed the juices for relief of respiratory ailments.

Echinacea fell out of use for a while but was reintroduced in Western herbalism back in the late 1970s and early 1980s. Unfortunately, many of its traditional uses were lost as modern research caused people to see it primarily as an immune stimulant. As a result, it was used primarily used as a kind of natural antibiotic, frequently combining with goldenseal for this purpose. Most people see still see it as a remedy to help fight off colds, influenza, bronchitis, strep throat and other acute infections.

I personally tried using echinacea by itself or in combination with goldenseal or other berberine-containing herbs for acute viral infections like colds and was disappointed with the results. I got far more rapid relief from these ailments when I used the Children's Composition formula (see the article on yarrow) or pungent warming herbs like those found in Herbal Composition and Herbal Crisis. The recipes for both can be found in the Modern Herbal Dispensatory.

What I did find Echinacea helpful for was the prevention of acute illness or recovery from lingering infection. Since I had chosen not to vaccinate my children and focus on maintaining strong immune systems instead, I created a formula that I called my herbal "vaccine" which used Echinacea as the primary ingredient. I would give this to my children twice a day during cold and flu season to keep them from getting sick. It really seemed to work. The formula contained echinacea, thyme, elderberry, and licorice. If I was making it these days I'd add astragalus.

A Potent Remedy for Bacterial Infection

While I think there are better herbs for viral infections than echinacea, I think echinacea is an amazing herb for bacterial infections, especially any infection where pus is forming. The flower itself looks a little like a boil and the purple color is like the reddish-purple lines you see around infected wounds. Echinacea is terrific for these types of infections. It can be taken internally and applied topically. For wounds, you can apply echinacea tincture (or a combination of echinacea and an herb containing berberine like Oregon grape or goldenseal) directly to the wound using a compress. Soak a cotton ball in the tincture and tape it over the wound. Change it every couple of hours.

When dealing with tonsillitis or any kind of lymphatic infection, I've found the combination of echinacea and red root (Ceanothus americanus), also known as New Jersey tea, to be fantastic. I've seen it clear up tonsillitis in a couple of days as well as shrink swollen lymph nodes.

For severe bacterial infection, including strep throat, I've used echinacea along with an equal amount of Baptista or wild indigo (Baptisia tinctoria). I learned about this from David Winston, who said this blend is helpful for infections where you start to get a smell similar to rotten meat. While normally I would send someone to a medical doctor with an infection this severe, I have had a few situations where the person wanted an herbal solution or found the infection to be resistant to antibiotics and this blend proved very effective.

Many years ago I recognized a connection between immunity and the sense of self-worth. I remember a lady visiting my office who complained that one of her four children was always sick. She fed them all the same and couldn't figure out why the other kids were healthy, but this one got sick easily. I told her, "I bet he's the one with poor self-esteem." She said, "You're right."

That's what makes the flower essence indications for echinacea so interesting. The flower remedy is for people whose self of self-worth has been shattered by trauma or abuse. It helps them reintegrate their sense of self-value. They rediscover their core identity and internal sense of self-dignity. I would say that anyone who gets sick easily, who also suffers from poor self-esteem would probably benefit by taking echinacea either as a tincture (3-5 drops per day) or flower essence for a few months.

Another personality indication for echinacea is given by Matthew Wood. He says it is helpful for people who work too hard and get sick when they try to take a vacation. They're overworked and exhausted and their immune system gets run down as a result. 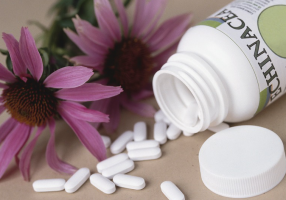 There are some definite contraindications for echinacea. Don't use it in autoimmune disorders. I've had first-hand experience with people with multiple sclerosis (MS) who got worse taking echinacea and it will probably exacerbate any autoimmune disorder. If the immune system is attacking the body's own tissues, the last thing you want to do is stimulate non-specific immunity. It's probably not a good idea to use echinacea with leukemia either. In leukemia you have an overproduction of white blood cells, so you don't want to stimulate further production.

In excessive amounts, echinacea can cause excessive salivation and a scratchy, tingling sensation in the throat. This rapidly disappears when the herb is discontinued.

In my experience, the most potent echinacea for fighting bacterial infections and blood poisoning is Echinacea angustifolia. It has the most acrid taste and probably contains the most alkamindes. However, it's probably best to avoid using it as it does not grow well in cultivation and has been overharvested to the point of being endangered in most of its habitats. The root of this perennial plant is used, which means when it is harvested, the plant is destroyed. The sad thing is that most of this overharvesting has been done promoting it as a cold remedy, which I've already pointed out is not its best use. I'd save it for the more serious bacterial infections.

Echinacea purpurea is easily cultivated but doesn't have much of a root. Fortunately, the flowers have good immune properties, which makes this plant more sustainable. While not as acrid, it still stimulates the immune system and is a good choice for use in formulas. It's also probably the better species to take as an immune tonic to boost the immune system.

Another species you may see is Echinacea pallida, which is somewhere in between angustifolia and purpurea in its action. It is sometimes found blended with the other two to make a compound echinacea tincture or extract. I've used the blend and found it very effective. One more species that has immune properties is Echinacea tennesseensis, which is rarely used in commercial herbalism.

For maximum effectiveness in dealing with acute infection, I find echinacea works best when taken in frequently repeated doses. A low dose for adults is 15-20 drops (1 ml), but most herbalists suggest 45-90 drops (3-5 ml) three times daily. I like to use it every two hours until the infection gets under control. Then taper off the dose. A good dose for children is about 1/3-1/2 the adult dose. As an immune booster, take a lower dose 2-3 times per day.