Bring strength and flexibility to your body and brain with silicon rich horsetail | April 12, 2022 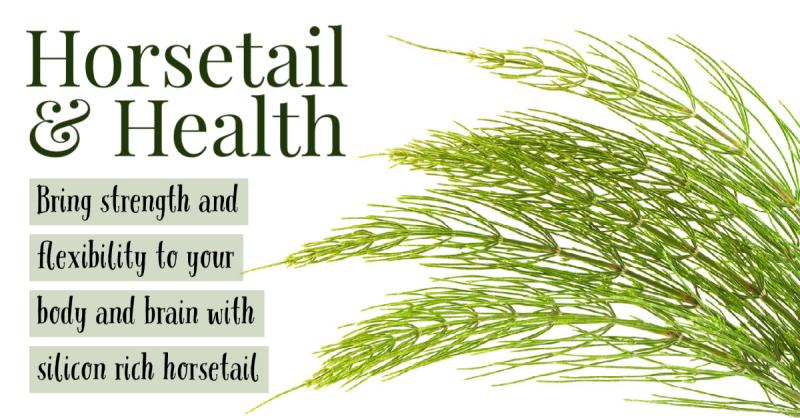 Horsetail is one of the first wild plants I knew how to identify. One of its common names is joint grass and I remember how as a child I enjoyed pulling the stem sections apart at the joints and trying to reassemble them like a plant-based jigsaw puzzle. Another common name is scouring rush, and I learned the reason for that moniker as a boy scout. You can actually use the plant like a scouring pad to help clean the dishes.

There are two basic varieties you’ll find. The one that gives it the name horsetail has many small side branches (pictured above and below left), while the other (the joint grass variety) has one tall stem (pictured below right). Both plants tend to grow in moist sandy soil, especially near streams. 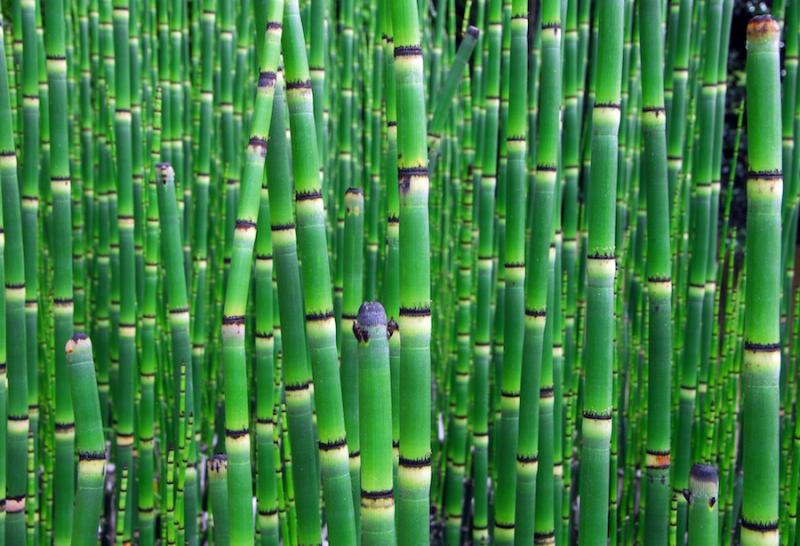 There’s a reason horsetail prefers sandy soil. Sand is composed primarily of silicon dioxide (Si02), which is also known as silica. Horsetail is the richest herbal source of silicone of which I’m aware. In fact, understanding the properties of silica (Si02) and silicon (Si) is helpful in understanding why horsetail is a valuable remedy and how it benefits the body.

Silica has a crystalline structure, which can be observed in grains of sand. Its crystalline form is most noticeable in quartz, which is composed of silica. Many other crystals, including amethyst, citrine, rose quartz, agate, onyx, jasper, and tiger’s eye, are also based primarily on silica. The presence of additional minerals gives them their unique colors and properties. Glass is also composed primarily of silica. When you look at the properties of sand, glass, and the aforementioned crystals, they provide signatures as to the properties of silicone-rich herbs like horsetail.

I first learned about the value of the element silicon (or silica) from the writings of the Australian naturopath Dorothy Hall. She says that silicone would be abundant in the diet if we were eating natural foods. It is naturally found in the chewy parts of plants, such as the skins of fruits and vegetables and the coatings of whole grains and other seeds. The problem is that we tend to remove these chewy parts by peeling, coring, and otherwise removing the chewy parts, leaving only the soft, easy-to-chew parts. Here’s what Dorothy Hall says about this in her book, What’s Wrong with You?

The rougher and coarser the food we eat, the greater the silica [silicon] content we gain. Unpolished grains, fibrous, raw vegetables, the skins of fruits, nuts, and vegetables; silica is found in all these unrefined foods. Anything which needs chomping and chewing is a better source of silica than those smooth, bland, refined, foods which slide down the rather more ‘refined’ throats of civilized populations.

Another Signature of Silicon 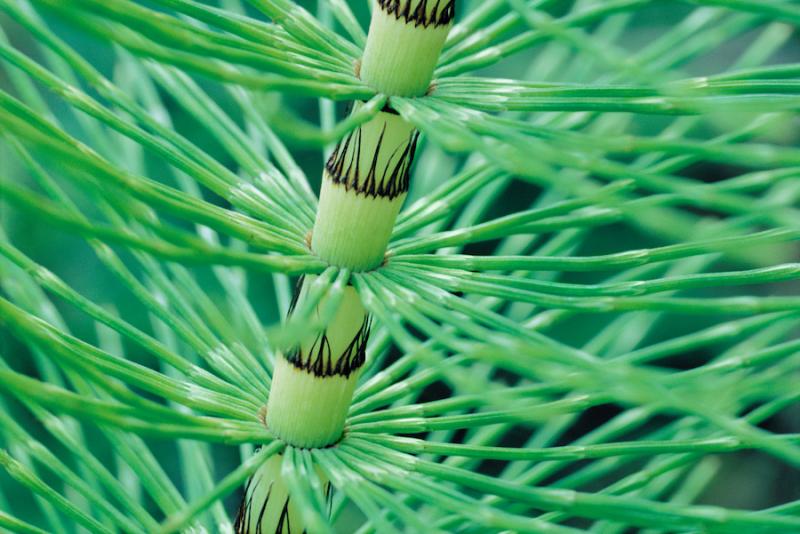 According to Wilhelm Pelikan, in Healing Plants, silicon has another important signature. Speaking of the borage family, which contains a lot of silicon-rich plants, he says that silicon has both a watery, plastic nature (forming the flexible structures previously discussed) and a movement towards crystalline forms, such as those found in the hairy surfaces of plants in the borage family. He says, “…silica is always endeavoring to rid itself again of water, aiming towards the highest and most definitive form it is capable of—rock crystal.”

He continues “At the periphery of life-filled form, the siliceous principle appears to radiate structures, in rough, bristly hairy growth which reveals something of its crystalline, mineral nature. Silica evokes peripheral growth in all organs.” Many borage family plants have these bristly, crystal-like hairs. This is also seen in the rough surface of horsetail that enables it to be used as a scouring rush exhibits this aspect of silicon.

Just as silicon is found in the chewy, tougher parts of plants, it’s also found in what should be the tougher, stronger parts of the body, such as fingernails, hair, skin, bones, and joints. What silicon does in these tissues is to make them both strong and flexible. Silicon makes bones less brittle, joints more resilient and less susceptible to damage, fingernails less likely to break, and hair less likely to fray at the ends.

Horsetail exhibits this quality of silicon. It is flexible, easy to bend, but also tough, coarse, and hard to tear. Two other rich sources of silicon, seaweeds, and grass, also possess these qualities. Seaweed is very flexible but difficult to tear and just think how easily the grass springs back to an upright position after you walk on it.

Horsetail helps tissues of the body remain both strong and flexible, thus making them less susceptible to breaking, tearing, or otherwise becoming damaged. It’s not only a rich source of silicon, it’s also a fairly good source of calcium and other structure-building minerals. Thus, horsetail can be helpful for any condition where the body’s structural components have become brittle and weak, such as osteoporosis, osteoarthritis, thin and easily damaged skin, frayed and thin hair, and brittle, easily broken fingernails.

Silicon and the Nervous System 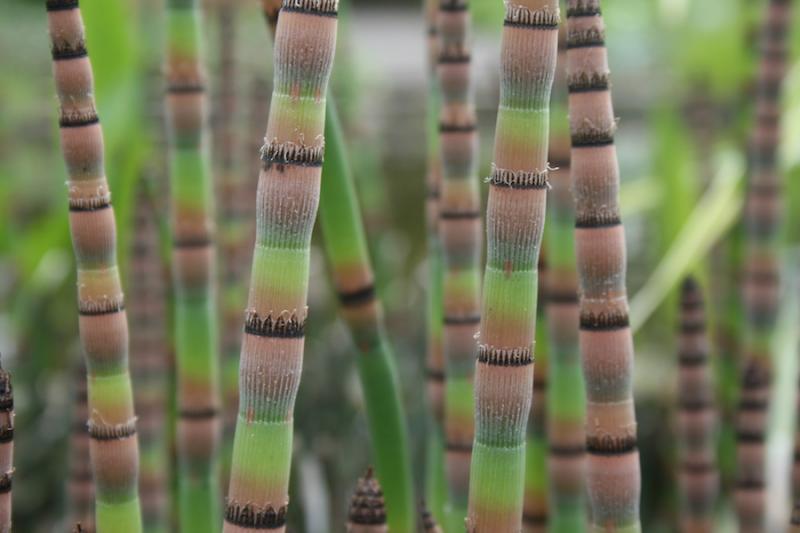 You’ve probably heard of Silicon Valley, the home of the computer industry. It gets that name because computers rely on silicon as a semiconductor in computer chips. Silicon is also part of our own computer-like nervous system. It’s an important component of the myelin sheath which insulates the nerves. It’s also part of a crystal-like structure in our pineal gland, which is believed to be responsible for our intuitive abilities.

Without adequate silicon, the nerves seem to “short-circuit” more easily and we have less nervous resilience. Dorothy Hall also comments on this in What’s Wrong with You? She says that because of our silicon-deficient diets “our collective nervous-system health has declined disastrously.” Her point is that eating soft food makes both your body and brain soft—unable to handle the rigorous demands of life. Dorothy Hall claims, “Without silica-rich foods in our diet we are going to grow increasingly larger, heavier, and weaker, until our bodies will collapse with alarming suddenness under physical loading.”

She also claims that the Chinese people saw long fingernails and coarse, thick hair as signs of a wise person. These characteristics arise from high silicon content in the hair and fingernails. She believed that associating physical resilience with wisdom was not without basis, as silicon makes both a stronger body and a better functioning brain and intuition. She also points out that sage tea, beloved of the wise people known as ‘sages,’ is also a good source of silicon.

In addition to being a silicon-rich plant, horsetail is also a mild diuretic and astringent. The Chinese saw a relationship between the water element and kidney qi and the bones. Herbs that tonify or improve kidney energy also helped to strengthen the bones. Horsetail definitely fits in this category.

Horsetail is indicated when any tissue has lost structural tone and flexibility. It is very helpful when there is damage in the urinary organs that are causing the passage of blood in the urine. It may also be helpful for urinary incontinence and bedwetting in children.

The lungs can also benefit from horsetail as they need to be both strong and elastic. Horsetail can be helpful for coughing of blood from the lungs. Taken along with mullein for six months or longer, it can gradually help to restore structure and elasticity to the lungs in people with emphysema.

Dorothy Hall paints a profile for the person who needs silicon. She says that silica people are communicators and can talk a lot, and rapidly too. They may need solitude and rest to slow down their mind. They often start to lose energy and bend over as they keep talking. Their mental fatigue can make them prone to mishaps, stumbling, sliding, or falling.

As they age, their posture tends to slump and their back becomes rounded. They may also find it more difficult to keep talking as they did in the past. People who are very deficient in silicon may also develop nervous habits such as fingernail biting, picking at things, and twirling their hair. Matthew Wood adds the indications for homeopathic silica to this list, indicating they may also be faint-hearted, overly yielding, nervous, and lack emotional resiliency or backbone, a quality also known as grit (think of sand).

Getting the Benefits of Horsetail 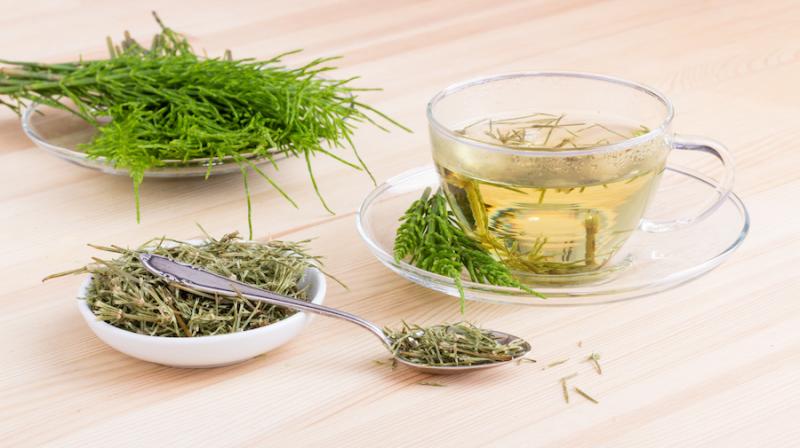 Because horsetail is so coarse in texture, it’s not wise to take very much of it in capsule form, especially if you have a sensitive colon. However, there may be something of an antiparasitic nature to powdered horsetail. After all, diatomaceous earth, a clay that is rich in silica, is known to kill parasites by punching small holes in their outer membranes. Horsetail may do the same thing.

For other uses, it’s better to make it into a decoction (or other extract). Horsetail is a key ingredient in the Herbal Minerals Formula described in both Modern Herbal Dispensatory and Strategies for Health, which is a very good formula you can make for healing bones, muscles, teeth, skin, connective tissue, and nerves.

Another good way to get the benefits of horsetail is through Eugene Watkin’s Hair, Skin, and Nails Formula, which contains horsetail, dulse, rosemary, and sage. I recommended this formula to my elderly mother when she had developed some osteoporosis and arthritic problems. She took it regularly instead of a calcium supplement. When she chipped her kneecap after a fall at age 82, the doctor who worked on her said she had the bones of a 50-year-old. This speaks highly of the benefits of silicon-rich herbs like horsetail in keeping us strong and resilient as we age.

It was Kimberly Balas who helped me understand that Eugene Watkin’s Hair, Skin, and Nails Formula was good for more than building healthy body structures. It’s very helpful for protecting your brain and nervous system, especially since both sage and rosemary are associated with wisdom and a sound mind. It’s also good for the pineal gland and the parathyroid.

Reviewing all this information about horsetail and silicon made me think that maybe I need to get more silicon in my diet. Maybe you can see indications that you need more in your diet, too. If so, horsetail, either as a single herb or as part of one of the formulas mentioned above, is a good way to help you to be more resilient in both body and mind so you can bend without breaking.