My introduction to herbs came in my teens, studying outdoor survival. I became fascinated with edible and medicinal wild plants. While sampling edible wild plants I quickly learned that there was a huge difference between plants that are edible and plants that are palatable. There are some wild foods that I would never eat unless I was starving, but others are quite delicious and I’m happy to eat them when I find. One plant in the latter category is purslane

Because purslane is a common garden weed, if you have a garden, chances are you've seen it growing. But, if you’re weeding your garden and find purslane, don’t just throw it away, try eating it. Like many wild plants, purslane is probably more nutritious than the foods available at the grocery store. It’s a great source of omega-3 fatty acids, antioxidants, and vitamin E, as well as having a significant amount of carbohydrates and protein.

Raw purslane is a tasty addition to salads. It is a juicy succulent with a slightly sour flavor due to the presence of oxalic acid, which is also found in spinach, sorrel, and yellow dock.

Purslane as a Medicine 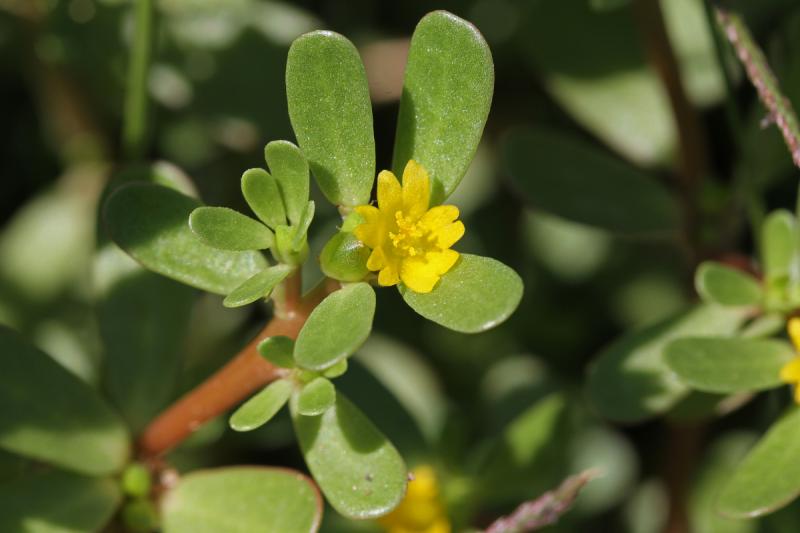 I was familiar with purslane as an edible plant for several decades before I learned that it also had medicinal properties. That discovery came when I learned it was an ingredient in a Chinese formula called Kang Weng (anti-virus). It was developed by Dr. Wenwei Xie from Beijing for treating herpes.

As a result, I learned that purslane is used in Chinese medicine to remove toxic heat, cool the blood, ease diarrhea, reduce swelling, and eliminate parasites. It has an antibacterial effect and acts as a mild diuretic due to its content of potassium salts, such as potassium chloride, potassium sulfate, and potassium nitrate.

The fact that purslane is mucilaginous and contains some tannin, makes it a good plant for a quick fresh poultice. You can crush the leaves and apply them to insect bites and minor injuries, especially in situations where the skin is dry and irritated (red). These same properties are what make it soothing to the intestinal tract and helpful for diarrhea.

For using purslane, I would suggest that the fresh plant is best for all applications, both as food and medicine. You can gather the entire above-ground plant, including the stems, leaves, and flowers. And seriously, as edible plants go it is really quite tasty, so if you’ve never tried it, look for it and try some.