Bringing light and healing to the nervous system - June 30, 2020 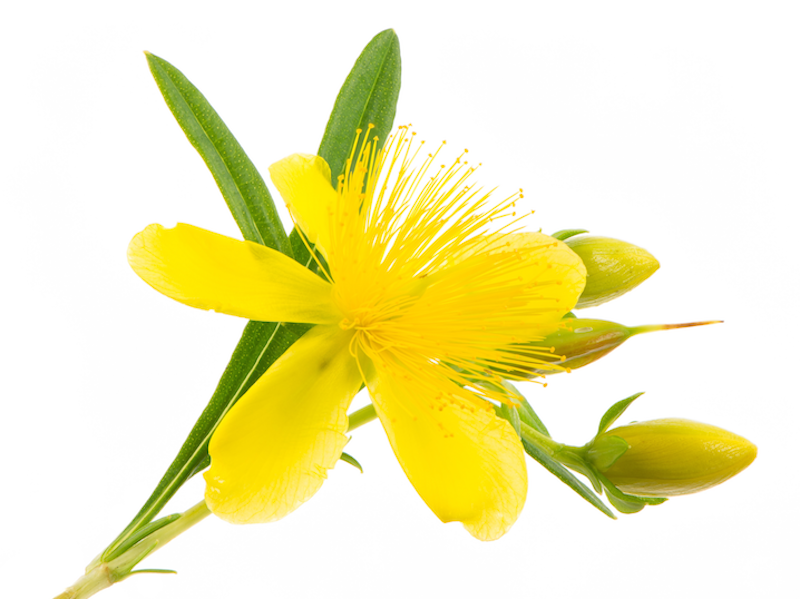 St. John's wort is a perfect example of what Paul Bergner was saying at a conference of the American Herbalist Guild many years ago. He said that modern herbal commerce was impoverishing herbalism. What he meant was that herbs tend to become pigeon-holed as remedies for specific health issues and the other uses of the herb tend to be forgotten.

If I were to ask most people what St. John's wort is used for, they would say depression. Few would know anything else about this amazing remedy. I would like to change that. My goal in this article is to give you a better understanding of this valuable herbal remedy. 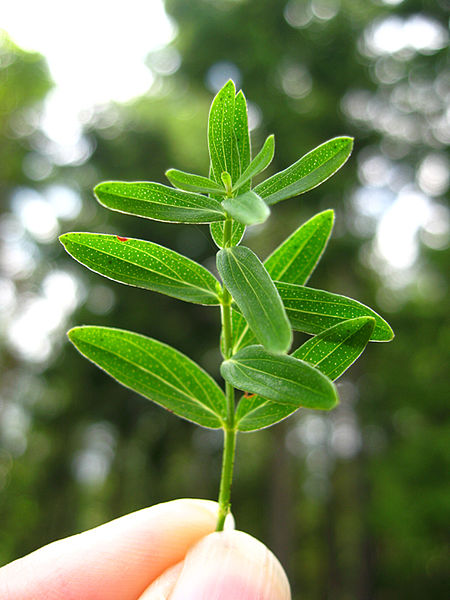 St. John’s wort is associated with light. It typically blooms around the summer solstice, the longest day of the year and if you get the juice of the leaves on your skin, it makes that area of the skin more susceptible to damage from light, which means you will sunburn more easily. Sheep who graze on the plant also show this photosensitivity, which results in sunburn and blistering. Even though the dried herb doesn't do this, it still points to the idea that St. John's wort is a plant that makes us more sensitive to light.

The Latin name for St. John's wort, Hypericum perforatum, alludes to another signature for St. John's wort that pertains to light. Perforatum, like the word perforated, refers to the tiny holes in the leaves of the plant. If you hold a leaf up to the sun, it looks like tiny pinholes have been poked in it, which allow light to pass through.

All of this suggests that St. John’s wort is a remedy that “brings in the light.” In folklore, it is thought to ward off evil spirits. If one thinks of depression as a form of darkness that comes over a person, then the idea of St. John’s wort being a remedy that lightens our being makes a lot of sense. 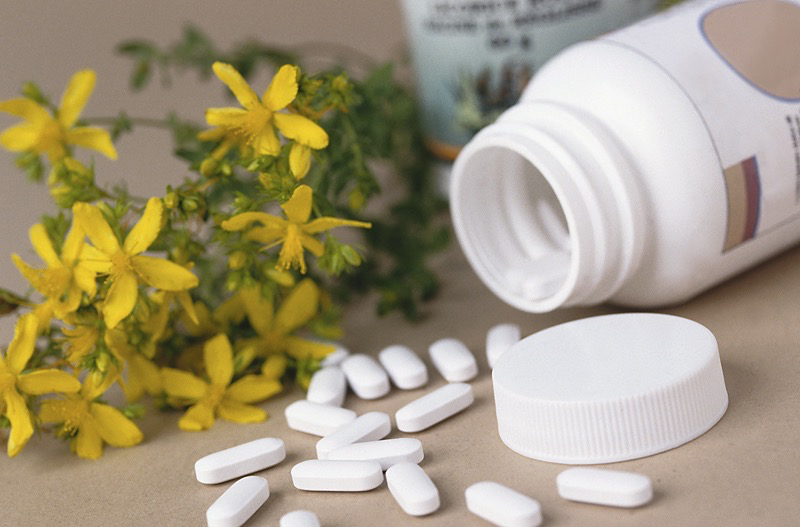 St. John’s wort became popular as an antidepressant because of the research showing that it had compounds that affected neurotransmitters in the brain. One of the most famous of these compounds is hypericin, but there are several others, including pseudohypericin, isohypericin, and hyperforin. These compounds have been shown to inhibit reuptake of serotonin, dopamine, and norepinephrine. Hyperforin also inhibits reuptake of GABA and L-Glutamate. So, unlike SSRIs (selective serotonin reuptake inhibitors), St. John's wort is a broad-acting remedy on neurotransmitters, helping to balance out brain activity.

In my experience, St. John's wort seems best suited for depression associated with stress or anxiety. If a person is depressed due to a long term battle with difficultly in their lives, St. John's wort helps renew their ability to cope with life's challenges. It is also helpful for seasonal affective disorder (SAD) or the winter blues, especially when combined with lemon balm. That's depression from darkness and a lack of exposure to light, which fits perfectly with its light bringing nature.

St. John's wort is generally NOT helpful for severe depression, bipolar disorder, or depression associated with hormones such as PMS or menopause. St. John’s wort or any other herb or drug is not a stand-alone therapy for depression. Other remedies and tools, especially counseling, are usually need as well. 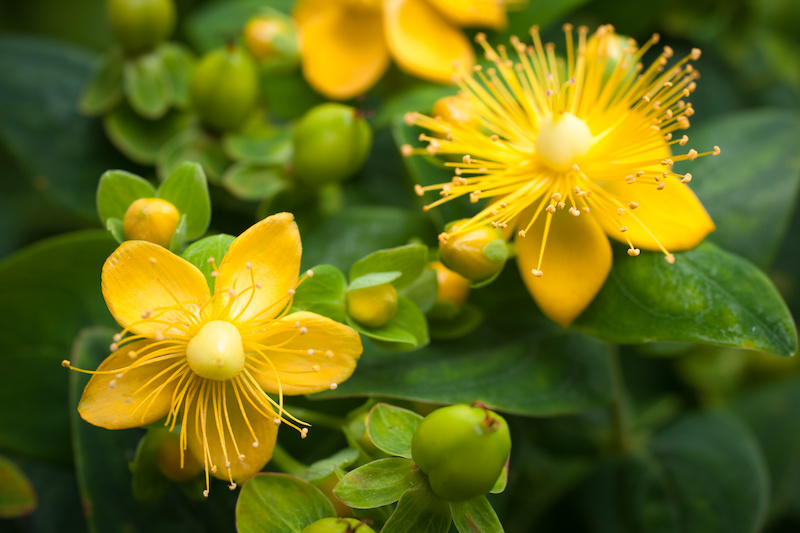 Getting in Touch with Your Gut

Matthew Wood suggested an interesting use for St. John’s wort in his Book of Herbal Wisdom. He says that St. John’s wort is a remedy for the solar plexus, the portion of the autonomic nervous system that oversees digestion. This area is also the home of gut instincts or the ability to be connected to our guts or inner knowing. The solar plexus is also an energy center or chakra in the body that helps us stay calm and centered in a crisis.

People who have a weak solar plexus energy tend to suffer from poor digestion and often develop a hiatal hernia. They often have a difficult time trusting themselves and may be plagued by fears, anxieties, and self-doubts. St. John’s wort appears to strengthen this area, improving problems with digestive disturbances caused by nerves and stress and aiding the ability to be calm and centered. When someone feels depression associated with suppression of anger, self-doubt, fear, the inability to trust oneself and poor digestion, St. John's wort is strongly indicated. 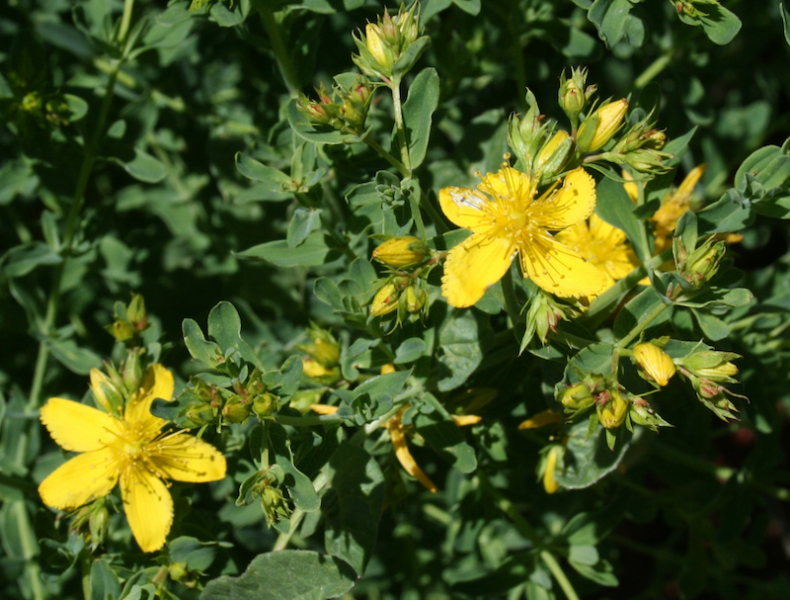 But, let’s move beyond depression to some of the other traditionally recognized benefits of St. John’s wort. Many of the aforementioned compounds (like hypericin) are also antiviral or antibacterial. The herb also contains an antibacterial and antiviral essential oil and tannins that aid in wound healing. This justifies the long-time use of St. John’s wort as a vulnerary or tissue-healing agent. It has been applied topically to aid the healing of wounds, burns, bruises, and lacerations. St. John’s wort is specifically indicated for deep wounds, including puncture wounds. One might say that it brings the healing light into the depth of the wound. Of course, you should avoid exposure to sunlight after applying it.

St. John’s wort is also a great antiviral remedy for herpes, mononucleosis, influenza (flu), and shingles. As an antiviral, St. John’s wort isn’t particularly strong, but it works well when combined with other antivirals like lemon balm, rosemary, thyme, and oregano. When using it for shingles, you want to use the herb internally and the oil topically. 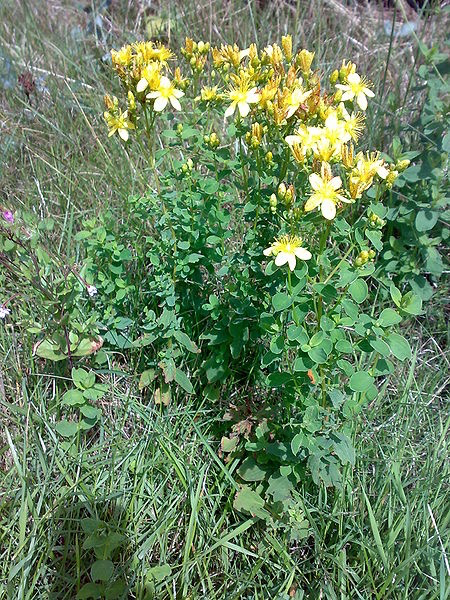 A Remedy for Nerve Damage

One of the most powerful uses for St. John's wort is one that is rarely discussed anymore, which is its capacity to help damaged nerves to heal. St. John's wort has been called the "arnica of the nervous system." Arnica, especially in homeopathic form, is an amazing remedy for injuries, rapidly reducing swelling and pain in sprains, bruises, and other injuries. When it's the nerves that have been injured, think of St. John's wort as the number one remedy. It can be used internally, topically, and homeopathically for this purpose.

St. John’s wort has been used to treat spinal injuries (the kind that may result in paralysis) and nerve damage resulting in numbness or tingling. It is also used when the nerves are irritated causing tenderness and sharp, shooting or stabbing pains, or chronic pain due to nervous exhaustion.

For treating injured nerves St. John’s wort is best used as the whole herb internally (not the standardized extract), topically as an oil extract and/or homeopathically. For serious nerve injuries, a 30c or 200c homeopathic is highly recommended along with the topical application of the oil. If there is bruising or swelling use St. John’s wort oil mixed with arnica oil. This combination is very good for any injury where the skin is not broken.

St. John’s wort oil is an interesting remedy. When the bright yellow flowers are extracted in a carrier oil (like olive oil), they turn the oil blood red. St. John’s wort oil is a great topical remedy for injuries and pain. I used it when I broke my leg and was experiencing some numbness and nerve damage and it helped restore the feeling I had lost. 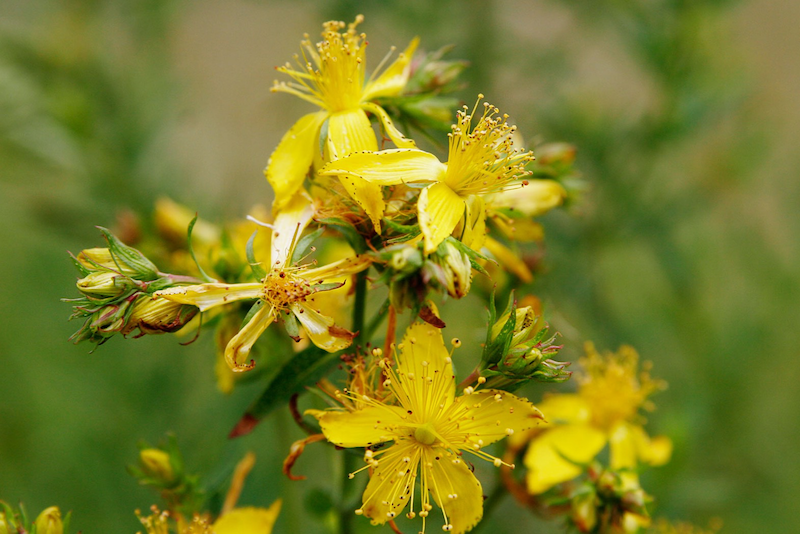 As a flower essence, St. John’s wort also exhibits the ability to strengthen the solar plexus energy. It helps people who feel overly vulnerable and fearful. These people may become depressed and suffer from nightmares and disturbing dreams. This is because they have lost touch with their own spiritual nature. St. John’s wort promotes illuminated self-awareness that helps a person find their own inner strength or the guts to face up to life.

I’ve used the flower essence successfully for children suffering from nightmares. It’s also helpful for disturbing dark dreams in adults, including people suffering from PTSD, when combined with chaparral flower essence (which is for psychic toxicity). An extract of the herb can also be helpful for children who are anxious, fearful, and suffer from insomnia and bad dreams.

I hope I've helped you see some of the hidden uses of St. John's wort so you can better utilize this herbal bringer of light.