Mimosa is a remedy for for opening up the heart emotionally and physically | July 27, 2021 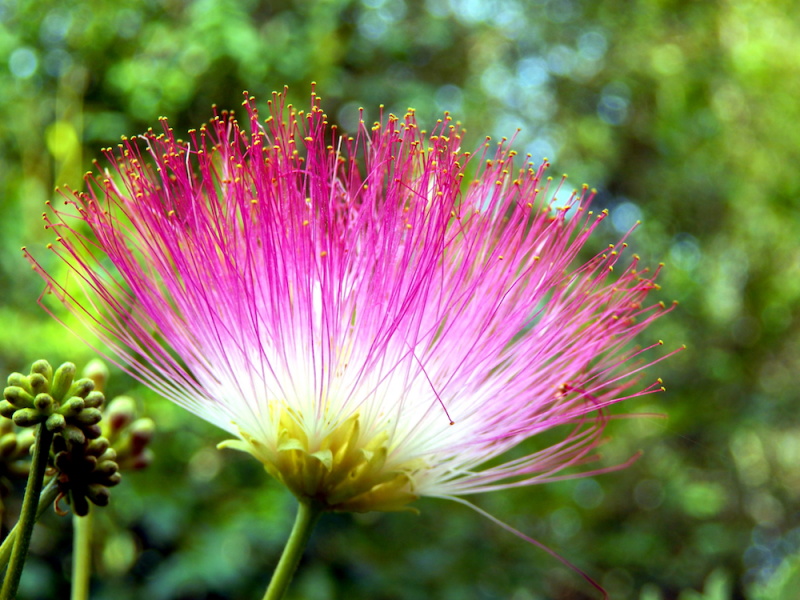 I was introduced to mimosa (Albizia julibrissin) by Thomas Easley, who gave me a tincture made from the flowers. He didn’t tell me anything about it; he just asked me to experience its effects. When I took a few drops, it felt like the energy of the plant went straight to my heart, opening it up, creating a sense of happiness like the happiness you feel when you’re in love. This diffused outward from my heart. It was one of the most uplifting feelings I’ve experienced from any herb. I was immediately sold on it and wanted to learn more.

For those of you unfamiliar with this remedy, mimosa bark is a traditional Chinese medicine for supporting the heart, spleen, and lung meridians. They use it to relieve depression, improve blood circulation, and ease pain. They call it he huan pi, which literally translates as conjoined happiness bark. The word conjoined suggests the happiness is that experienced by two lovers. It’s a good description of the kind of warm happiness I felt from taking it. 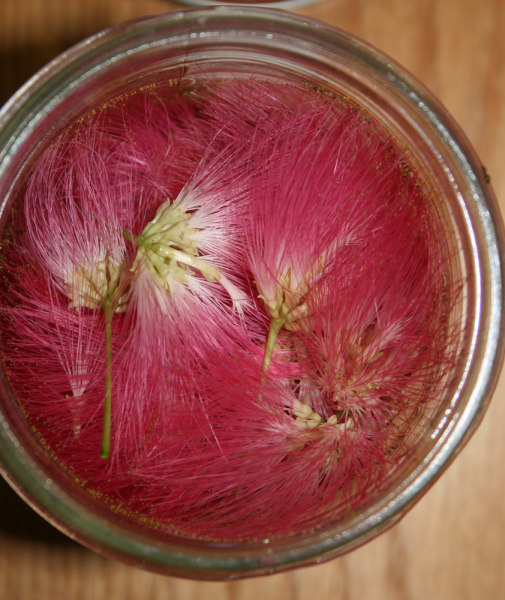 Shortly thereafter, I realized there were plenty of mimosa trees growing where I live. So, I picked some of the flowers, tinctured them in brandy (as shown on the right), and made my own extract. I used the tincture by itself, but I also made an amazing remedy from it by combining it with a rose petal glycerite. I made the glycerite from my favorite rose bush. I planted this rose because I loved the deep smell of the flowers. I picked the flowers as they were just beginning to bloom and put the fresh petals into straight glycerin.

Rose is also a heart-opening remedy and this blend of mimosa and rose is amazing for giving you a lift when you were feeling sad or discouraged. Both remedies are helpful for overcoming deep-seated grief that results in a hardness of heart. The mimosa flower helps create a feeling of mild euphoria and giddiness, while the rose provides a warm, comforting sense of happiness.

The bark, which is the part used in Chinese medicine, doesn’t create the same giddy feeling. Its action is more subtle and grounding, but it also relieves feelings of depression and sadness. The bark slowly lifts one’s energy and mood upward and softens the heart that has been hardened by stress and pain. Mimosa is also useful for calming feelings of irritation and helps people who have a bad temper.

Both the bark and the flowers improve circulation, which helps to ease pain caused by physical and emotional tension. This brings us to the important connection between healthy circulation and the feeling of being happy or “in love.” I learned about this connection many years ago from the book, Love, Sex, and Your Heart by Alexander Lowen.

The book explains that the pleasure we associate with love is associated with the outward flow of blood and energy. When we are in love, the arteries dilate and the muscles relax. This reduction in tension increases blood flow and energy on the surface of the body. This makes the senses, and especially the sense of touch, more sensitive. It also makes the skin warmer and gives it more color.

As Dr. Lowen explains, “The person in love seems to radiate joy. The light in his eyes and the glow on his skin are due not only to the strong flowing of blood to the surface of the body, but also to the wave of excitation that flows to the surface…”

This is definitely connected to the feelings of sexual pleasure that create conjoined happiness. As he further explains “…areas of the body where the blood comes very close to the surface are where intimate contact is made. These are known as the erogenous zones, namely, the lips, the nipples, and the genital organs. The red color of the lips reflects the richness of their blood supply…when two lips meet in a kiss, the blood of each person is separated only by [a] thin membrane, which produces a high degree of excitement.”

From studying Dr. Lowen’s work, I also came to understand that shock and grief have the opposite effect on circulation and muscle tone. When we go into shock, the muscles tense and the blood flow is reduced by vasoconstriction. This also happens when we lose someone we love.

The person who has experienced such shock becomes pale and cold as the blood flow to the extremities is reduced. Their senses also become more closed, causing them to feel numb. This explains why we describe love as warm and open, while hatred is cold and closed. Simply put, an open heart is loving and sensitive, while a closed heart is cold and unfeeling.

Because of this understanding, I believe that remedies like mimosa, which relaxes and opens up circulation, help a person who is closed down in pain to open up and feel warm and alive again. Thus, mimosa helps to ease the physical and emotional pain associated with being emotionally shut down. 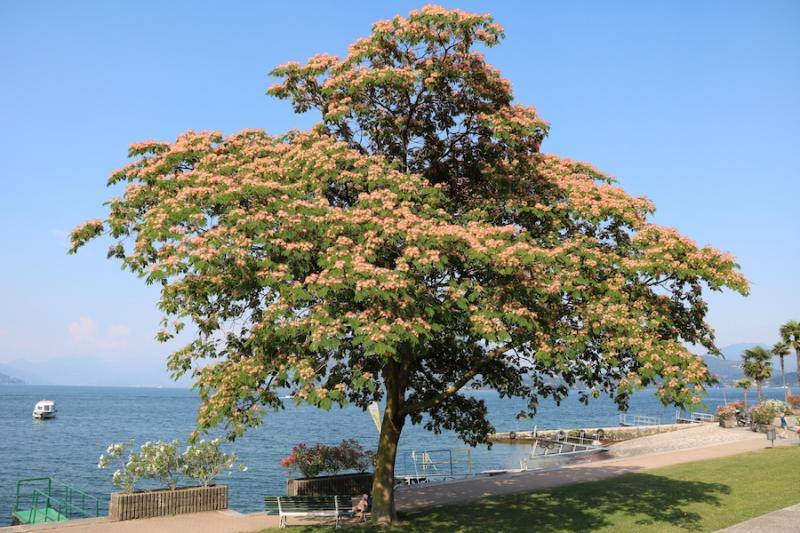 There may be another physical action that makes mimosa effective for the closed-hearted person. My Oriental Materia Medica by Hong-Yen Hsu says that animal studies have indicated mimosa has an oxytocic action. It enhances the hormone oxytocin which acts as a neurotransmitter and is created in the hypothalmus.

Oxytocin has been called the love hormone, because it tends to create feelings of trust, empathy, connection, and bonding between people. It’s released during labor and breastfeeding where it contributes to the experience of mother-infant bonding. It’s also released by affectionate touch, gazing into each other’s eyes, hugs, holding hands, gentle massage, and loving sexual activity.

All these activities are part of conjoined happiness, the feeling we get when we connect in a loving way with another person. By the way, chocolate is also oxytocic, which is one of the reasons we associate it with valentine’s day and expressions of love.

Mimosa, which is also known as albizia, has been also been used in Chinese herbalism to help bone fractures to heal, ease insomnia, and aid poor memory due to suppressed emotions. The bark tincture is available commercially, but if you’d like to experience the effects of the flowers, you’ll probably need to make your own tincture. It’s well worth the effort to make if you need to open up from feeling emotionally shut down.