A Source of Physical and Emotional Strength From An Astringent Tree | August 31, 2021 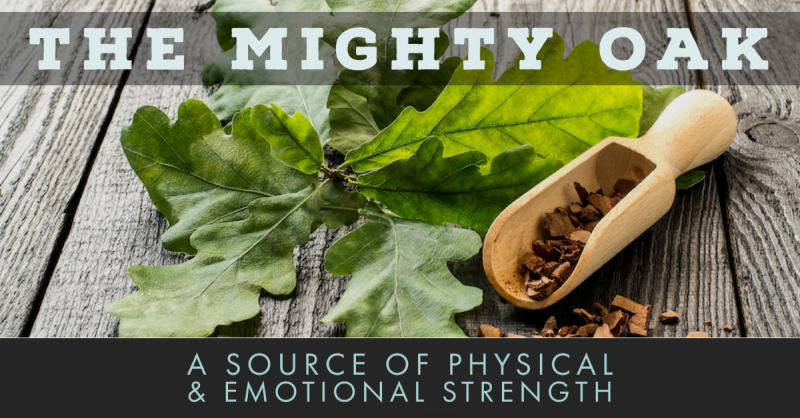 The first herb book I studied was Back to Eden by Jethro Kloss. I remember reading about white oak bark (Quercus alba) and being puzzled by how it could be used for varicose veins, hemorrhoids, and bleeding gums. I wondered how one plant could be used for so many different health issues.

It wasn't until I started working with Edward Milo Millet, my first herb teacher, that I got the answer to my question. He helped me understand how different remedies can have similar actions can be grouped together. Astringents are one such group, they are remedies that tone loose tissue due to the presence of tannins. Oak is one of these astringents and understanding that astringents tighten loose tissue answered my question.

I understood that the varicose veins, hemorrhoids, bleeding gums, and the other conditions oak bark was useful for were not really different health problems. They were the same problem affecting different parts of the body. All these conditions involved tissue that had lost structural tone and white oak bark, being astringent, helped to restore that structural tone.

While I could talk about the uses of astringents in general, I believe it is much more interesting and useful to tell you about some of the specific uses of oak trees and share some stories about their healing powers. I’ll begin by sharing a story Ed Millet shared with me. 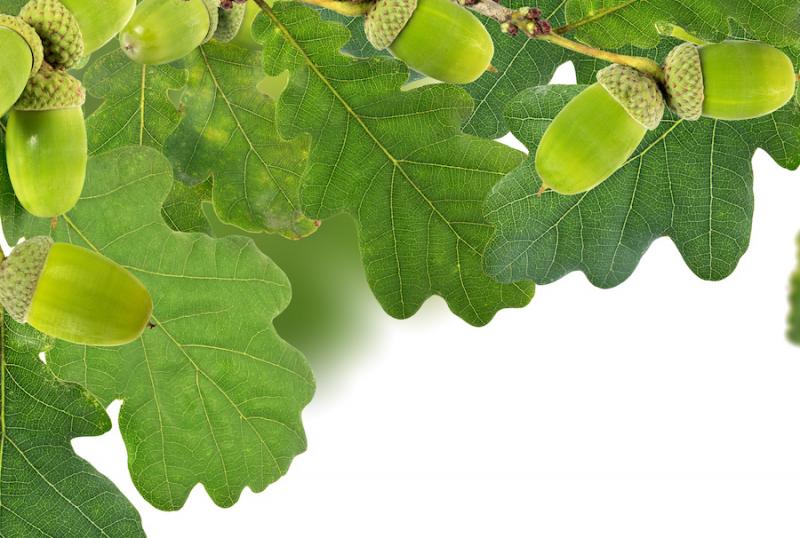 Ed was with his family on an outing when one of his sons disturbed a wasp’s nest. He was stung on the neck about one dozen times. All the stings were swelling up, a dangerous situation. If the swelling became severe enough, it would cut off his breathing. Ed was about to panic when he realized they were in a grove of short bushy scrub oak trees. (Q. gambelii).

Ed grabbed an oak leaf, chewed it up a little to release the juices, and dabbed it onto the wasp stings. To his relief, the swelling immediately started to subside. Then, about 15 minutes later his son said, “Dad, you missed one.” There was only one swollen area left, which was also treated with a chewed-up oak leaf.

Ed’s story has always stuck with me, and I’ve used oak leaf and other astringents (plantain, gumweed, yarrow, blackberry) in a similar manner for various bites and stings. I’ve also enjoyed similar success.

Oak Bark for the Teeth

When I was first studying with Ed back in 1980, I met a lady who had severe gingivitis. Her gums were bleeding so badly, and her teeth were becoming so loose that the dentist had recommended pulling all of them and giving her dentures. I suggested that she might at least try to save her teeth and she agreed. She put off having her teeth pulled to try some natural remedies for a couple of weeks.

Although I was still an amateur herbalist, I came up with the following program. I had her take about 2-3,000 milligrams of vitamin C daily. I also told her to brush her teeth with oak bark powder and allow the powder to set on her gums before rinsing. I also suggested that she use a decoction of white oak bark as a mouth rinse four or five times a day.

We were both amazed that the program worked. After a month, her teeth stopped wiggling, most of the bleeding was gone, and the dentist decided not to pull all her teeth. I cite this as an example of what an amateur herbalist can accomplish given a little practical knowledge. If I were doing this today, I would also recommend taking Co-Q10, at least 400 mg. daily, and taking some form of minerals, such as a colloidal mineral supplement.

Iridologists often use the 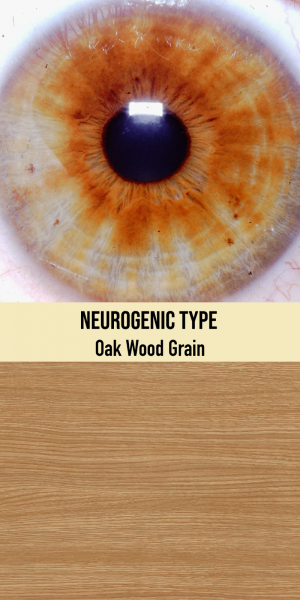 grain of various types of wood as an example when teaching about constitutional strength. Constitution refers to how much physical or emotional strength a person can endure before experiencing problems. The fine grain of oak means it can handle more weight and is less subject to breakdown than the knotty wood of the pine tree. 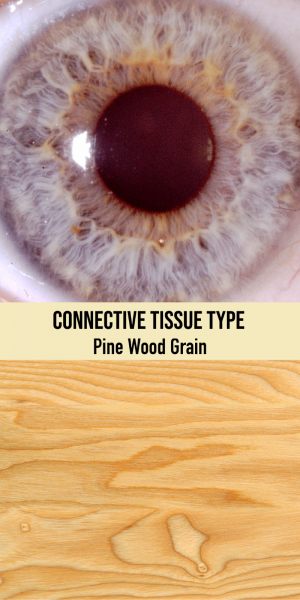 The picture labeled connective tissue type shows this type of iris pattern with the wood from a pine tree. People with the connective tissue type are more prone to problems that involve a breakdown of structural tone. This includes problems like varicose veins and hemorrhoids, which white oak bark is traditionally used to correct, but it also includes problems like organ prolapse, being more easily bruised or injured, and less structural stamina. Oak can be a good constitutional remedy for such people. They can increase their structural tone by taking a small amount, say one capsule, of white oak bark daily.

Oak is also one of the original Bach Flower remedies, which is made from red oak (Q. robur), but I think all oak trees will have similar personality indications. To understand the person who emotionally needs oak, it’s important to understand that the connective tissue type, shown above, may actually be more emotionally resilient than the physically stronger neurogenic type.

The person with a stronger body often doesn’t recognize their own limits and will push themselves to the point of a nervous breakdown. Hence the name neurogenic type. The connective tissue type, on the other hand, tends to recognize their limits, and often find it easier to bend, that is to adapt and adjust to emotional difficulties.

Although a person with a strong body can take a lot of physical abuse and still come out on top, their capacity for stress is not unlimited. Because they are strong-willed, they sometimes don’t know when it’s time to quit or surrender. The phrase, “the mighty oak has fallen,” is the clue that oak flower essence may be the emotional remedy a given individual needs.

The oak person is so used to feeling strong, they can’t admit when they are defeated. Their rigid nature makes them inflexible and their iron will keeps them striving beyond their limits.  Oak flower essence helps a person learn to balance their physical and emotional strength, accept their limits, and know when it’s time to surrender rather than keep fighting. It helps them learn that sometimes it’s better to yield. 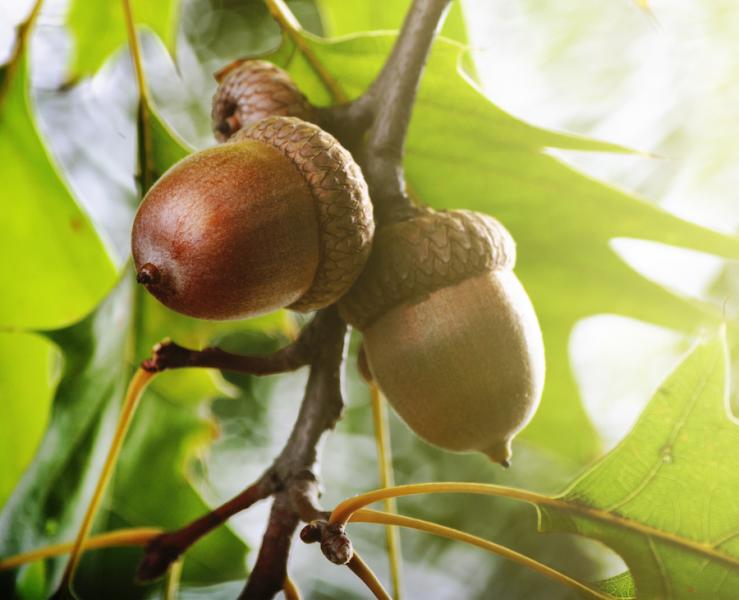 Oak trees produce millions of edible nuts called acorns. The acorn has often been used as a symbol for the power of an idea. Inside of every acorn is the blueprint for a potential oak tree. All of us have ideas, but few people really take the time to plant and nurture their ideas so they can mature. So, the positive side of the strong will of the oak is its ability to keep striving in spite of the challenges it faces. And the oak tree faces many challenges, including the fact that most of its acorns are eaten by animals long before they can grow.

People can eat acorns, too, but they are often too astringent to be palatable. To improve their flavor and digestibility you need to leech the tannins out first.

Tannins are fairly water-soluble, so acorns can be leeched in a couple of ways. A traditional way native people prepared them was to leech them in cold water. They gathered them, shelled the nuts, put them in baskets, and suspended the baskets in a stream of water for one to several days to remove the tannins. They then dried them for storage. You can read some suggestions for modern methods for doing this at backyardforager.com.

There is so much more I could have said about oak, such as its use in tanning leather (which is where the term tannin comes from). It’s also a remedy I use a lot in blends for poultices and soaks to treat injuries.

Meanwhile, I’m sure there are oak trees growing where you live. So, take the time to learn to identify the oak species in your area and learn the many ways you can use them for health and emergency preparedness. If hard times come, the oak may give you nourishment and strength to stand up to the challenges life brings.