The Wisdom of the Elderberry 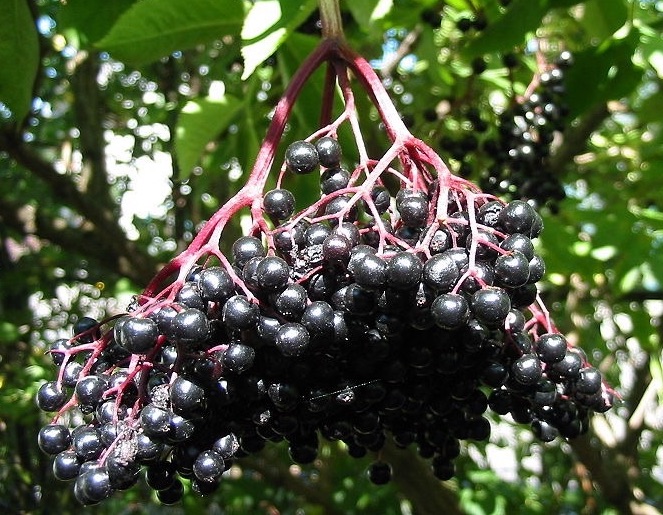 When you've been studying plants as long as I have, some of them become like old friends. You can easily spot them while driving 60 miles an hour down the road. One of those plant friends for me is the elderberry bush.

My first experience using elder was to gather the wild berries, which I made into elderberry syrup. Later I wildcrafted the flowers to make my Children's Composition formula for colds, flu, and fever. Over the years I've found that other parts of the plant that are useful too. The leaves, stems, and roots have also been used for medicine, and each part possesses different medicinal properties. The plant has so many different uses it could be considered a wild pharmacy, especially for helping to detoxify the body.

Various parts of the elder plant can help to open all of the channels of elimination. It can promote perspiration through the skin, expulsion of mucus from the respiratory system, the elimination of excess fluid via the lymphatics and kidneys and can even act as an emetic and laxative for the GI tract. With this in mind, let's look at the uses for various parts of the elder plant. 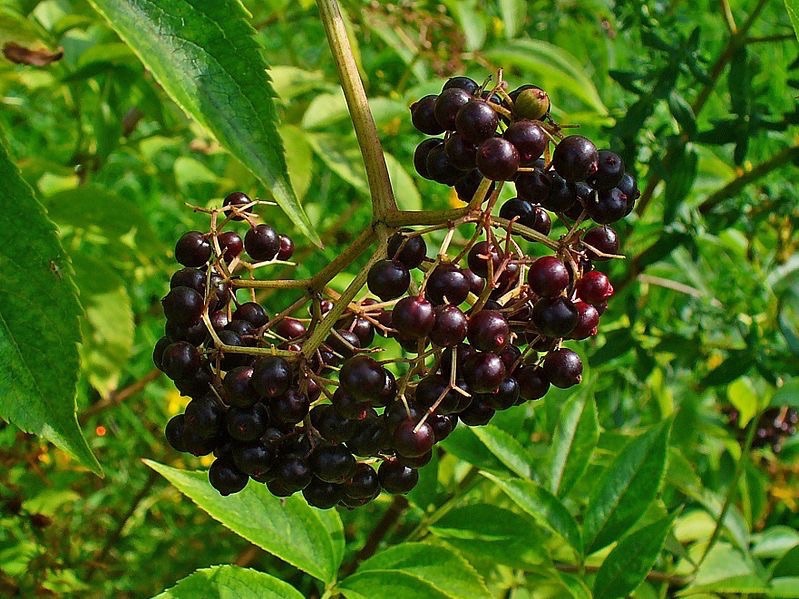 The fruits of the elder, although commonly referred to as berries, are actually drupes, fruits with a single seed like an apricot or a peach. They are the most popular herbal medicine because their antiviral properties. They enhance inflammatory cytokines, which inhibit viral replication. In my experience, they also act as a mild expectorant and decongestant.

I've picked elderberries and made them into a syrup by removing the berries from the stems (not a particularly easy task) and then cooking them with just a small amount of water and pressing them through cheesecloth to get the juice. I measure how much juice I have and then add an equal amount of honey. This can be bottled using a steam or water-bath canner to preserve for later.

Elderberry syrup is delicious on pancakes, especially if you add just a little real maple syrup. On a few occasions, when my kids were mildly congested, I "treated" them by making whole grain pancakes and using elderberry syrup on them. I've also just given them the syrup on a spoon as a medicine.

I've also made elderberry glycerite using the dried berries and the sealed simmer method, which you can read about on this website or in the book Modern Herbal Dispensatory. Elderberries are one of those plants that adds a fairly pleasant flavor to medicines, so I'd sometimes add elderberries to a formula to improve the taste.

Elderberries have also been used to make wine. Being a science fiction fan, I read Ray Bradberry's Elderberry Wine long before I ever tasted the stuff. Personally, I don't like the way alcohol makes me feel, but I do like the taste of elderberry wine. Fortunately, it's not easy for me to find in Utah, so I rarely drink any. However, I think the wine would be another way to get the benefits of the elderberry. (For medicinal purposes only, right?) 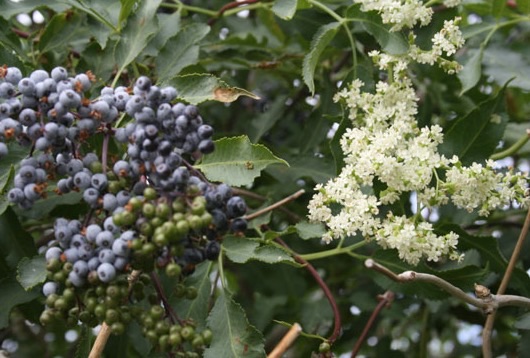 The raw berries are considered mildly toxic because they contain a glycoside that releases cyanide when it is metabolized. These compounds are unstable and break down easily when the berries are dried or cooked. However, I think the danger of toxicity is hugely overrated. To back this up, let me quote Thomas J. Elpel in his book Foraging the Mountain West.

"When we hear that something might be poisonous, we often [take] it out of proportion. To put the issue in perspective, consider that cherry pits also contain cyanogenic glycosides and apple seeds contain cyanogenic acids, but how many people do you know who have died from cherry pits or apple seeds? I've swallowed plenty of both, and I often eat whole apple cores, seeds, and all. I've also eaten many blue and red elderberries, seeds and all. Your body can detoxify limited quantities of cyanogenic compounds, but you can poison yourself if you consume too much."

I agree. I frequently eat organic apples, core and all. I figure if horses can do it, so can I. I've also eaten the wild blue elderberries while harvesting them and so have my children. I've even eaten a few red ones. I've never felt ill from any of this. However, I recommend using primarily the cooked or dried berries if you're going to use larger quantities. 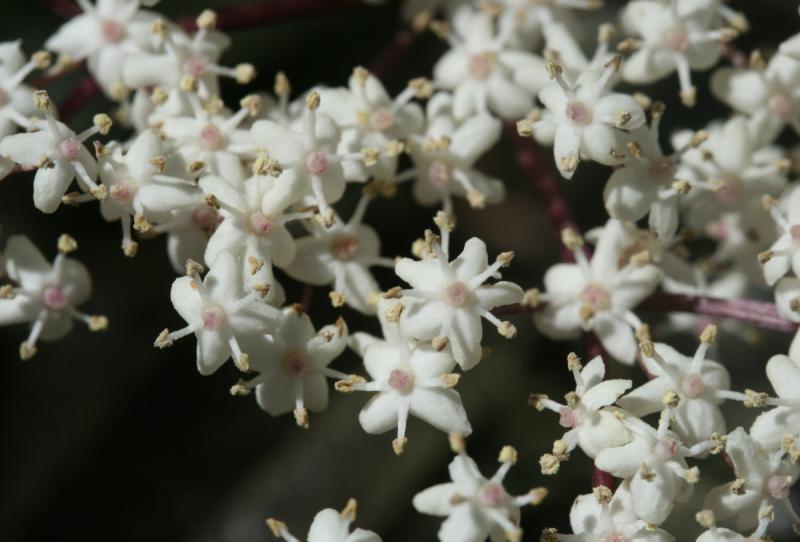 I think elderflowers are an underutilized remedy in the herbal world. I've used them primarily as a febrifuge to help bring down fevers. They have a very cooling, soothing effect. Dr. Henry Box, a famous Quaker herbalist, claims that the combination of elderflower and peppermint saved many lives during the 1918 flu epidemic. I go one step further and add yarrow to make my Children's Composition formula, which was the mainstay of helping my kids get well when they were sick. I talk about this in my article on yarrow.

The flowers, like the berries, are edible. Thomas J. Elpel talks about making elderberry fritters in the book mentioned above by dipping the flowers in batter and frying them. 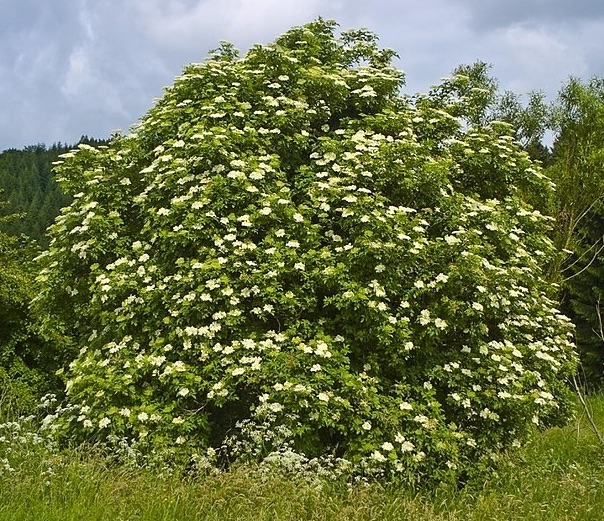 Elder leaf is not a remedy you'll find in general commerce. Like the berries, it's considered poisonous and would be safer for internal use if it was dried or cooked. However, its primary uses are topical and therefore completely safe. Like the berries, the leaves have an antiviral action, but they are also applied externally to heal wounds, reduce swelling and fight infection. They have been used to make salves and oils for burns, bruises, acne, infected wounds, ulcerations and swellings.

The inner bark of the elderberry bush is a laxative, which like cascara sagrada must be dried and aged before use. Otherwise, it is a toxic remedy (especially to children). Matthew Wood says, "As a purgative, elder acts on the intestines, but should be used in smaller doses for cumulative effect, rather than the sudden gush." The bark, like the leaves, can be applied topically to swelling or injuries. 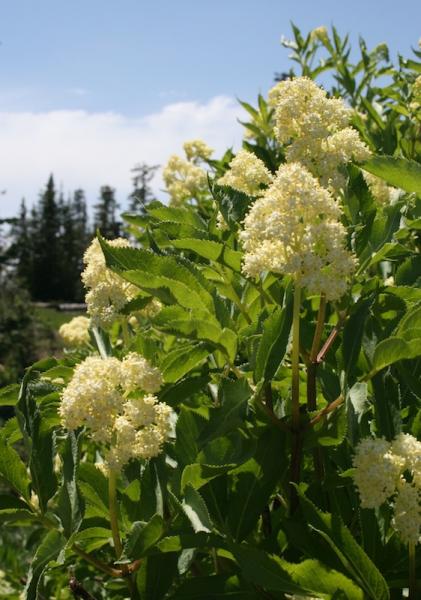 There are a number of different species of elder that are used medicinally. The most common one is the European black elderberry, Sambucus nigra. The more commonly used species in Western herbalism is Sambucus canadensis. Another variety, Sambucus racemosa, is a more toxic species and not generally recommended for use. The species I wildcraft is a Western variety with powder blue berries, Sambucus caerulea. The red elderberry, Sambucus pubens, is also quite common where I live.

There's an old saying advising us to "respect your elders." It's wise advice, which young people in our society often fail to heed. As herbalists, we can benefit by respecting our elder and making friends with this extremely valuable member of nature's pharmacy.

The Wisdom of the Elderberry: Food and pharmacy in one bush

Echinacea
A Potent Antibacterial with a Shady Past 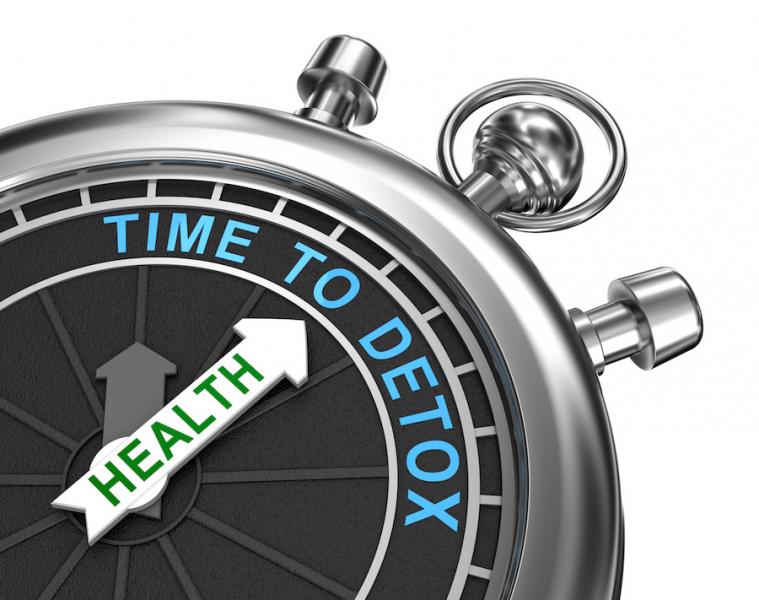 Detoxification or cleansing is a major therapy that can help heal many different health conditions. But there is more to detoxification than just stimulating elimination.

Did you know that it is important to detoxify both mentally and emotionally as well?

Join Steven in this webinar as he shares his understanding of detoxification from a broader perspective and teaches about how herbs and other remedies can help you let go, not just of physical toxins but unhealthy thoughts and beliefs and painful emotions.