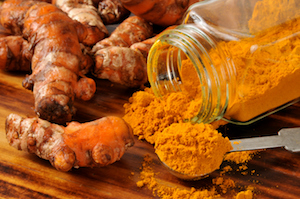 Turmeric is an Indian spice that imparts a yellow color to curry dishes. Native to tropical Southeast Asia, turmeric is in the same botanical family as ginger. It has been used as both food and medicine in Asia for thousands of years, but recent research has made the herb increasingly popular in Western herbalism. Much of this research has centered on curcumin, one of its most well-known constituents, but turmeric contains many valuable ingredients besides curcumin.

It contains an essential oil that is antimicrobial, anti-inflammatory and antihistamine. A compound called turmerin has been found to be antioxidant and antimutagenic. Another ingredient in turmeric, ukonan-A, activates white blood cells, while ukonan-D inhibits carcinogens. This is in addition to the carotenoids, minerals and other nutrients it contains.

Here’s what research and tradition have to tell us about turmeric.

Clinical research suggests turmeric can be a valuable remedy in treating rheumatoid arthritis, osteoarthritis and other inflammatory conditions.1  For instance, in a study of 18 patients with rheumatoid arthritis, taking 1200 mg of curcumin daily was as effective as taking 300 mg per day of phenylbutazone, a non-steroidal anti-inflammatory drug. Curcumin was effective in reducing morning stiffness and joint swelling. 2  In another study of curcumin’s effects on arthritis, mice fed curcumin displayed less infiltration of immune cells in the joints, less synovial hyperplasia, and less cartilage destruction and bone hyperplasia than control mice. 3

In a human clinical trial using whole turmeric for osteoarthritis, it was shown that taking 500 mg. of a standardized extract of turmeric twice daily significantly reduced pain and improved functionality. The study involved eight weeks of treatment in patients with osteoarthritis of the knee. Patients taking turmeric extract also had significantly reduced usage of analgesics and NSAIDs.4 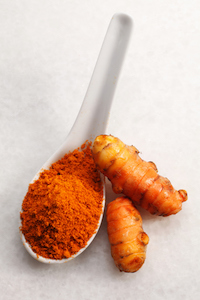 Turmeric is approved in Germany as a prescription medication for a variety of digestive disorders. It stimulates the flow of bile from the gallbladder, which aids digestion and assimilation of fats.  It can be helpful for gallstones and pain in the gallbladder. It increases mucus production in the stomach and has been shown to help ulcers to heal.  It can also relieve symptoms of heartburn, gastritis and dyspepsia.

According to the University of Maryland Medical Center, a double-blind placebo-controlled study confirmed the effectiveness of turmeric in reducing bloating and gas in patients with indigestion. It was found to increase mucus production in the stomach and ease dyspepsia. 5

Turmeric has also been shown to be helpful for ulcers. One study involved 45 patients, 24 males and 21 females. Twenty-five had ulcers from 0.5 to 1.5 cm in diameter. They were turmeric orally in doses of 2 capsules (300 mg each) five times daily, one half to an hour before meals, at 16.00 hours and at bedtime. After four weeks almost half of the patients (12) showed an absence of ulcers. After 8 weeks, 18 had no ulcers and after 12 weeks, 19 were ulcer free. The other twenty cases had erosions, gastritis and/or dyspepsia, but not ulcers. After 4 weeks of the same treatment they also showed improvement. Abdominal pain and discomfort satisfactorily subsided in the first and second week. 6

Turmeric has long been used in both TCM (Traditional Chinese Medicine) and Ayurveda (traditional Indian medicine) as a tonic to the liver. Curcumin has hepatoprotective properties and aids liver detoxification. It increases glutathione levels and glutathione-S-transferase activity, which gives it antioxidant properties.  It also stimulates bile flow and eases nausea. Western herbalists have used it along with cholagogue herbs like fringtree and barberry to help remove gallstones.

Turmeric has a powerful antioxidant action. It appears to interfere with the synthesis of pro-inflammatory eicosanoids (chemical messengers).  It acts as a free radical scavenger, inhibiting peroxidation of lipids (fats) and protecting nervous tissue from toxins like lead and other heavy metals. The research suggests that this antioxidant action may help to prevent certain chronic and degenerative diseases, such as cancers, Alzheimer’s disease, and cardiovascular conditions.

Turmeric may also be beneficial for the eyes, which need extra antioxidant support.  In an Indian study conducted by King George's Medical College and reported in the 1999 issue of “Phytotherapy Research,” curcumin was as effective as corticosteroids in treating uveitis, an inflammatory eye condition. 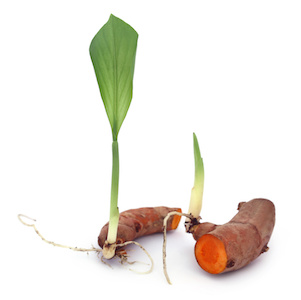 Several studies have shown that curcumin has a positive effect on the brain and nervous system.  It has been found to help protect the brain in injury and to reduce the risk of stroke. It also has a positive effect on neurogenesis, the formation of new connections in the brain. It increased levels of brain-derived neurotrophic factor in rats. 7  In one animal study, curcumin was shown to protect against toxicity and impairment of mental ability caused by an amyloid-protein infusion. 8  Another study found that curcumin shrank the size of plaques and reduced neurite dystrophy in an Alzheimer mouse model. 9

A study using a transgenic animal model indicated that curcumin diminished plaque formation and overall inflammation in the cardiovascular system.  It has been shown to have a synergistic effect with fish oil to improve blood flow and protect against cognitive deficits. 10

In one study, curcumin-induced apoptosis (cell death) in cancer cells without cytotoxic effects on healthy cells. 11   In an animal study, curcumin inhibited the growth of cancer cells in the stomach, liver, and colon as well as oral cancers. 12  I wouldn't rely on turmeric or cucumin as an anti-cancer remedy by themselves, but they could certainly be included in a comprehensive program of natural cancer therapy.

A study also found that low concentrations of curcumin interfere with Herpes simplex-1 replication. It inhibited the recruitment of RNA polymerase II to viral DNA, thus inhibiting transcription. 13   Another study found that curcumin is significantly associated with protection from infection by HSV-2 in animal models of intravaginal infections. 14  These studies suggest turmeric may be helpful in fighting herpes infections.

Turmeric has a wide variety of uses in Ayurvedic medicine in India. An Ayurveda text dating back to 250 BC, recommends making a turmeric paste to alleviate the effects of food poisoning. It is considered to be warming and strengthening to the body and is used in times of convalescence. It is a folk remedy in India for swelling in joints and for the relief of arthritis. It was also used as a digestive system tonic to aid digestion and metabolism, relieve gas and expel parasites. It is believed that it enhances blood flow and purifies the blood.

In traditional Chinese medicine (TCM), turmeric rhizome is classified as a pungent herb with a warming property that affects the spleen and liver meridians. It is said to improve circulation, ease pain and promote bile flow. Turmeric root and rhizome are classified with a slightly different property. They are considered bitter and pungent with a cooling action that affects the heart, lung and liver meridians. They are used stagnant qi and pain, digestive upset and menstrual issues.

Turmeric has been used topically on cuts, burns, sprains, and bruises. It stimulates tissue healing and can help to reduce scarring. It also helps to stop bleeding. It has been used both internally and externally to help skin problems like psoriasis, eczema or acne. Be cautious using it topically as it stains skin and clothing. 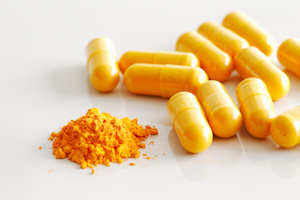 Turmeric or a standardized curcumin extract from it can be very valuable in aiding both rheumatoid and osteoarthritis, as well as other inflammatory conditions where there is pain. It may also be helpful for protecting the brain and circulatory system as people age.

Turmeric is useful in formulas for the liver and gallbladder, as well as formulas to aid digestive function and ulcers. It can also be helpful as an immune modulator in both cancer and autoimmune disease as well as helping the body fight viral infections. Consult a qualified herbalist, naturopath or natural-health oriented doctor for assistance in using turmeric for these types of serious health issues.

11Aggarwal, B. B.; Shishodia, S. (2004). "Suppression of the Nuclear Factor-κB Activation Pathway by Spice-Derived Phytochemicals: Reasoning for Seasoning". Annals of the New York Academy of Sciences 1030: 434–441.