A Powerful Herbal Remedy for Sepsis and Severe Infection | May 10, 2022 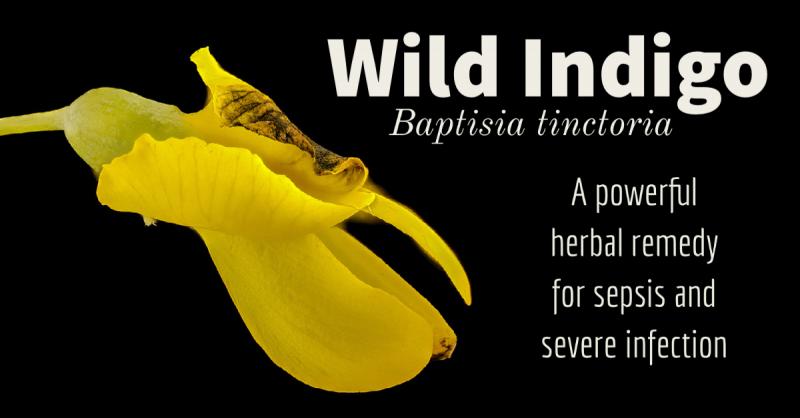 One of the best things about being part of the American Herbalist Guild for me has been becoming friends with some incredible herbalists. One of these valued herbal colleagues is David Winston, founder of Herbalist and Alchemist. He is part native American and well versed in both traditional and modern scientific information about herbs as well as differentiating why you would use one herb over another in specific conditions.

One of the herbs I learned about from David Winston is Baptisia or wild indigo, a powerful, but potentially toxic botanical. Don’t let the toxic part scare you away from using it. It simply means you need to understand that it’s not a food or spice, but rather a plant medication meant to be used in small amounts for specific purposes. I think most toxic botanicals are safer than prescription drugs, as long as you learn how to use them properly.

Members of the Baptisia genus have long been used to produce dyes. The species I’ve used medicinally is Baptisia tinctoria, a yellow-flowered plant that produces a yellow dye. (Pictured above and below left.) However, when you research Baptisia tinctoria, some books and web sources show a blue-flowered species. From what I was able to gather, I think this appears to be Baptisia australis, which is also known as blue wild indigo or blue false indigo. (Pictured below right.) This plant has also been used to make a dye, but a blue one instead of a yellow one.

Both plants have been used medicinally according to the book Native American Ethnobotany by Daniel Moerman. However, what I am writing specifically about is B. tinctoria, which is the species that is most readily available as an herb. You can find the bulk herb, tincture, and homeopathic preparations of it by searching online. You can also grow it in your garden. 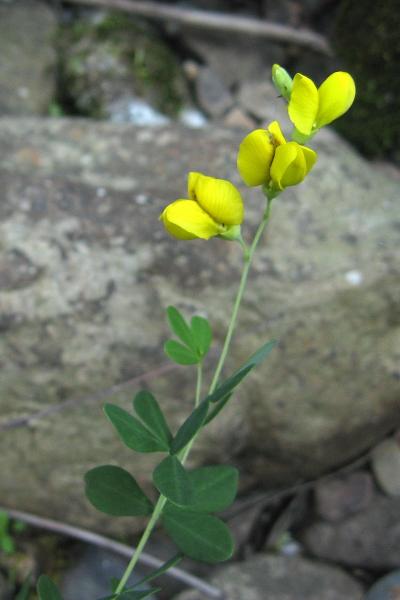 A member of the pea family B. tinctoria’s Latin name is based on its use as a dye. Baptisia comes from the Greek word for dye and tinctoria from the Latin word for dye. The part used in herbal medicine is the root, which is bitter, mildly acrid and slightly astringent.

According to some of the research Thomas Easley a few years ago, the Creek Indians administered a decoction of baptisia externally and internally to children who seemed lifeless and drowsy and at the point of being sick. The Mohegans used a decoction to bathe cuts and wounds. The Meskwakis used a tea to treat eczema, wounds, sores, and snakebites.

The herb was also used by Eclectic physicians and information about it can be found in Kings American Dispensatory and Felters Materia Medica. They classify it as an emetic (an herb that induces vomiting) and a cathartic (a strong laxative). It also stimulates liver detoxification and increases bile flow. The person who needs it looks like they’ve been out in the cold too long, their face being swollen, dusky, and expressionless.

If you’ve ever encountered someone with a severe bacterial infection where tissue is decaying and sepsis is occurring, that’s where wild indigo (B. tinctoria) is most strongly indicated. It’s used for serious infections or wounds with a putrid odor. David Winston says the tissue smells like rotten meat. This could be skin infections, severe tonsillitis, severe sore throats, or other deep-seated, chronic infections. Normally, antibiotics would be indicated in these cases, but I’ve seen wild indigo help people where antibiotics were not working that well.

I’ve never used wild indigo by itself, however. When I use toxic botanicals, I like to blend them with less toxic herbs, which reduces the likelihood that the person I’m giving the remedy to will take too much. The most common way I’ve used wild indigo is to blend it in equal parts with echinacea, which is also indicated for these types of severe infections but lacks the toxicity of wild indigo.

This combination works well on severe sore throats and skin infections. It is also helpful for tonsilitis, but I normally use echinacea and red root for that. If the infection in the tonsils is severe, however, I’d add wild indigo, using two parts of echinacea, two parts of red root, and one part wild indigo.

For deep-seated infections involving swollen lymph nodes, wild indigo can be combined with more mild lymphatic herbs. For instance, you can combine equal parts wild indigo, cleavers, and echinacea. For serious lymphatic congestion, you can add a small amount (about ¼ part) of poke root.

You can also mix wild indigo, echinacea, and myrrh and use it as a gargle for laryngitis, tonsillitis, and pharyngitis. This mixture can also be helpful for severe sinus infections. A popular European immune combination is made with Baptisia, echinacea, and thuja. Thuja is another strong antimicrobial herb that is considered toxic in large doses, but the formula doesn’t seem to cause any toxic effects when used correctly. 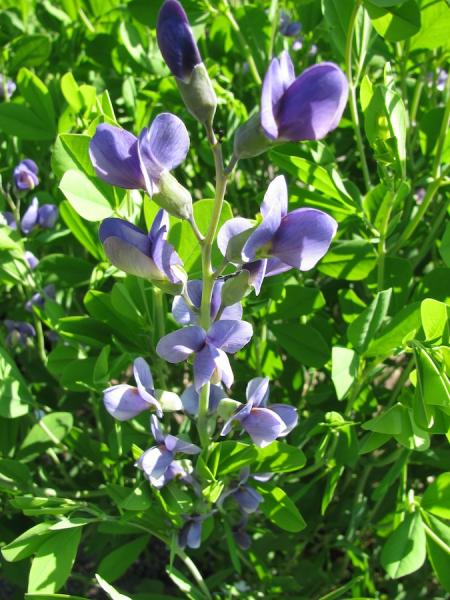 I’ve never seen any toxic or harmful effects in using wild indigo in any of the ways I describe above. The dose of the tincture as a single would be 1-20 drops up to three times a day. I recommend 10-20 drops of the combinations like the ones described above three to four times a day with a large class of water. You could also decoct the root by boiling one ounce of the powdered root in two pints of water and reducing the volume to one pint. The dose of this decoction would be one Tablespoon every two to four hours.

If you take too much it’s going to make you nauseous and could also make you throw up. That’s where toxic botanicals are often less dangerous than drugs. The first indications you’re taking too much are unpleasant, but not life-threatening. If you do get nauseous or throw up, stop taking the formula and/or severely reduce the dose. The herb can also cause loose stools. Because of its potential for toxicity, wild indigo is not recommended for children under 12 or women who are pregnant or nursing.

If you’re nervous about using a toxic botanical, you can get baptisia as a homeopathic remedy. Homeopathic baptisia has similar indications to the herb. It’s been used for throat and intestinal infections and is also indicated in septic conditions where there are ulcerations in the mouth and throat and a foul smell.  The person’s sweat, urine, and breath may also have an offensive odor.

The herb may also be helpful for severe flu and fever. It’s indicated when the skin is darkly flushed and the tongue discolored a deep red or dark brown or heavily coated. Other indications are severe lethargy, tenderness, sore and heavy muscles, and a worsening of symptoms when exposed to cold, wind, and physical exertion.

Knowing about herbs like wild indigo is great for emergency preparedness. Just imagine a situation in which antibiotics are in short supply and you’re having to help people who have a severe infection. Knowing about herbs like baptisia and thuja and how to use them correctly could be a matter of life and death in such situations, so don’t be afraid to try toxic botanicals like these. Just use them carefully as directed and reduce the dose or discontinue them if you get negative reactions. If you follow these precautions, they are as safe as any over-the-counter drug medication (and a lot safer than many prescription drugs).