A Calming, Nourishing Adaptogen to Help Your Immune System & Calm Your Nerves | September 21, 2021 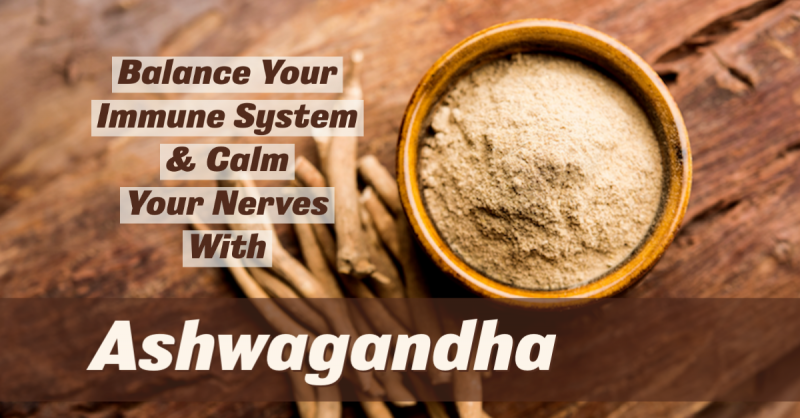 One of the things I find fascinating about herbs, as opposed to drugs, is their ability to return the body to a normal healthy state. Most drugs merely push the body in one direction or another and the effect only lasts while the medicine is being taken. On the other hand, if you get the right herbs, after taking them for a few weeks or months you'll still feel better even if you stop taking them or significantly reduce the amount. 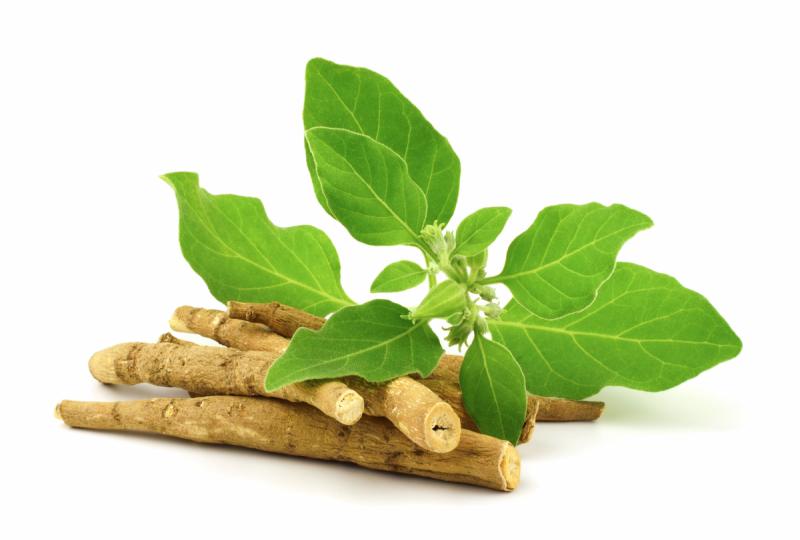 I believe this is partly because herbs are complex mixtures of substances, instead of being single chemicals. Herbs are also living things and that it takes life to nourish life. Whatever the reason, herbs do more than relieve symptoms, they actually help restore the body to health and keep it healthy.

Ashwagandha is one of those herbs that has a genuine restorative effect. It’s been used in India in Ayurvedic medicine for over 3,000 years as a rasayana. This Sanskrit word is derived from the root words, rasa, meaning essence, and ayana, meaning path. Herbs that aid the “path of essence” are used to maintain optimal health, as well as reverse the effects of aging.

In the West, ashwagandha is becoming increasingly popular as an adaptogen and a tonic. However, unlike stimulating adaptogens like ginseng, eleuthero, and schizandra, ashwagandha is a relaxing, nourishing adaptogen. In fact, the species part of its Latin name, Withania somnifera, means “sleep bearing” in Latin.

Ashwagandha contains steroidal compounds known as withanolides, which are similar to the ginsenosides found in ginseng. It is as effective as American or Korean ginseng at relieving stress, but without the risk of overstimulation which can occur with the excessive use of ginseng, a problem known as ginseng abuse syndrome, where a person becomes nervous and unable to sleep because they’ve taken too much ginseng.

Ashwagandha is the most widely used sedative in Ayurvedic medicine. Researchers at the University of Texas Health Science Center found that it produced an action similar to GABA, calming the brain, aiding sleep, and easing anxiety. The herb has also been shown to regulate serotonin and dopamine levels, which means it improves both mood and motivation.

As a calming adaptogen, Ashwagandha helps balance people with both elevated and low cortisol. By helping to re-establish normal cortisol rhythm, Ashwagandha may be helpful in all disorders where stress is a factor. While increasing your tolerance of stress and reducing your anxiety, it also uplifts your mood, having an antidepressant effect.

To help with sleep, take ashwagandha by itself, or with other calming nervines like California poppy, hops, or skullcap, about one hour prior to bedtime. You can also mix ashwagandha powder with warm milk as a bedtime tonic to aid sleep. To combat stress, anxiety, and depression, ashwagandha can be taken during the day, either alone, or in combination with other herbs to ease anxiety and depression. 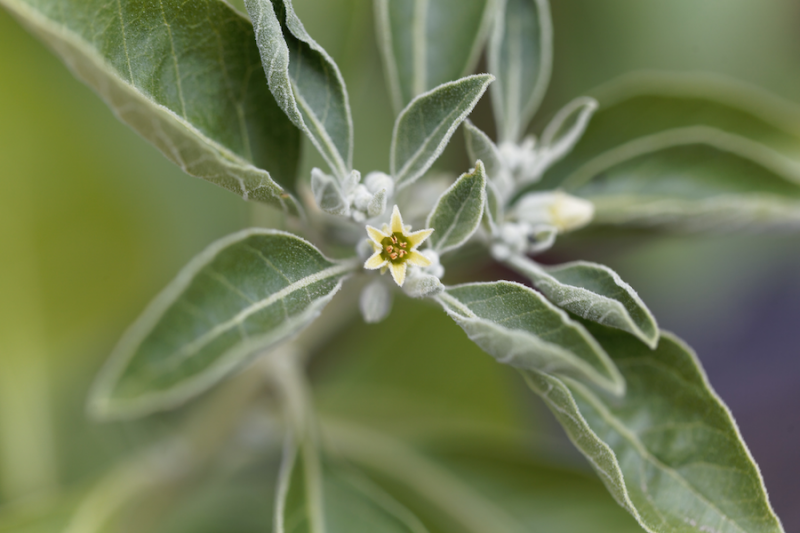 Ashwagandha has a nerve tonic effect and a neuroprotective effect. The withanamide in ashwagandha may help prevent plaque formation in Alzheimer’s. Research also showed it helped improve brain chemistry in people with Parkinson’s disease. It may also have a positive effect on patients with Huntington’s. While it is not a cure for these conditions, it could certainly be used as part of a holistic protocol to improve the quality of life in these disorders, and taken as a tonic may help reduce the risk of neurodegenerative disease. Combining it with CBD would increase its neuroprotective effects.

Another benefit of ashwagandha is its tonic effect on the thyroid. It is beneficial for low thyroid and helps prevent the conversion of T4 to Reverse T3, an inactive form of thyroid hormone caused by excessive stress. In addition, both animal studies and clinical experience show that it helps to calm autoimmunity, the primary cause of hypothyroidism in America. I recommend combining ashwagandha with black walnut, nettle leaf, and kelp as a restorative tonic for the thyroid.

The immune benefits of ashwagandha are numerous. Stress depletes the immune system, but ashwagandha helps counteract the negative effects of stress on immunity. It boosts white blood cell counts, including T-cell and NK cell activity.

There is research that suggests ashwagandha can help reduce the size of tumors and even inhibit the development of cancer. It has chemo-preventive properties that make it a useful adjunct for patients undergoing radiation and chemotherapy. Its ability to boost white blood cell counts helps prevent the immune suppression so common with chemotherapy. When using ashwagandha as an adjunct to chemotherapy, I recommend making it as a decoction and combining it with codonopsis, astragalus, and reishi.

Ashwagandha doesn’t just enhance the immune system, it also modulates it in autoimmune disorders. Herbalist David Winston combines it with black cohosh and kava kava for fibromyalgia. It can help reduce problems with allergies and asthma. 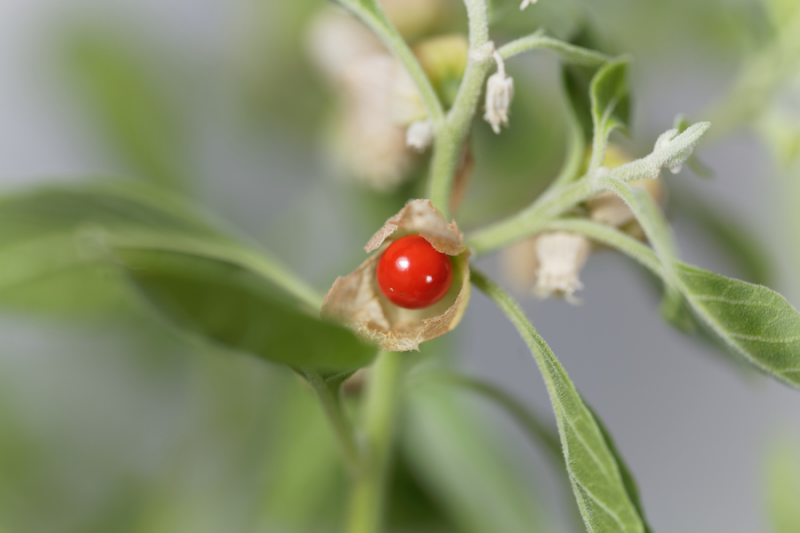 Ashwagandha is anti-inflammatory and was used in tribal Africa for fever and inflammation. It can help ease pain and improve joint function in both rheumatoid and osteoarthritis. It also enhances the remineralization of bone.

Another well-known use of Ashwagandha is as an aphrodisiac, helping to heighten sexual arousal, as well as treating impotency in men. It may help promote nitric oxide to aid blood flow.

In summary, anyone who is stressed to the point of nervous fatigue and insomnia can benefit from ashwagandha, especially if they have other hormonal imbalances like low sex drive, low thyroid, or adrenal fatigue.

To experience the benefits of ashwagandha the optimal dose is 3-6 grams a day. That would amount to about 2-4 capsules or 2-4ml of the tincture three times a day. However, you shouldn't have to take ashwagandha forever. After taking it for a month or more you should be able to gradually decrease the dose and stop taking it altogether and still experience positive benefits. 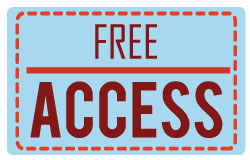 Steven Horne has been working with KnowYourWellness.org for over a year to bring you an 11-month Advanced Herbal Mentorship program. You can get a free sample of the program material, learning about herbs for the digestive system.

Click on the link today to take advantage of this amazing program and deepen your knowledge about how herbs can aid digestion.