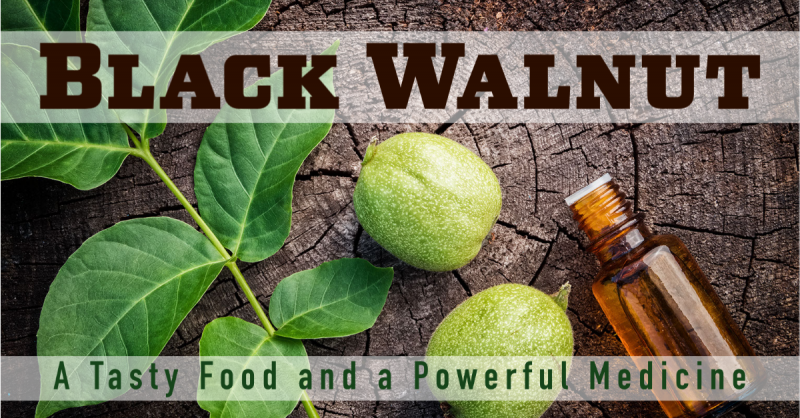 When I was young, my mother used to gather black walnuts, hull them, and get nut meats for cookies and banana nut bread. Hulling them was a messy job. The hulls contain a dye, which will stain your hands. They are also hard to crack. We would hit them with a hammer to break them open. Picking out the meats was also a time-consuming job, but the nuts are very tasty, and I was willing to help. 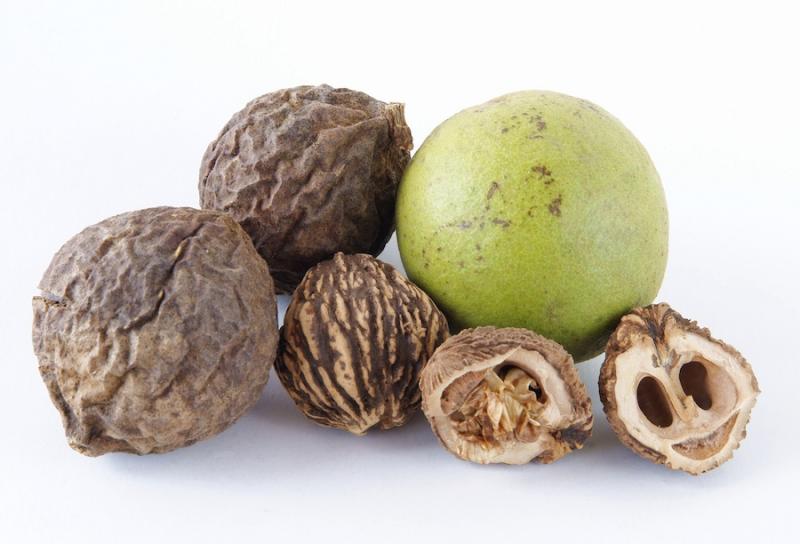 My mom didn’t even think about using those messy hulls, but they’re a valuable herbal medicine. So are the leaves, which can be used for similar purposes, although I've personally only used the hulls. A major constituent found in black walnut leaves and hulls is juglone, which has antibacterial, antiviral, antifungal, and antiparasitic action. Juglone oxidizes as the plant dries, so you’ll get more if you tincture the fresh leaves or green hulls.

Black walnut is a potent remedy for many kinds of infections and parasites. This nontoxic antiparasitic is suitable for both children and pets and the herb I've used the most in fighting parasites in both. However, the juglone in black walnut makes it useful for many kinds of infections, too. It helps to balance the intestinal flora, getting rid of yeast and harmful bacteria. It can even be helpful with some viral infections, like cold sores and herpes. It is helpful for infections both internally and topically.

Black walnut is also a tonic to weak tissues, having a mild toning and astringent action. I think the toning action may be stronger in the leaves, but both the leaves and the hulls help to tone up the intestinal walls and are one of the best remedies for leaky gut syndrome. They're also helpful for ulcerations, inflammatory bowel diseases, diarrhea, hemorrhoids, ballooning of the bowel, intestinal prolapse, and diverticulitis.

The tonic action of black walnut is helpful for the mucus membranes in general. It can be used internally for sore throats, tonsillitis, nasal catarrh, and hoarseness of the voice. It can be applied topically for impetigo, abscesses, boils, acne, eczema, itching skin, poison ivy, and shingles. The crushed leaves or extract are helpful when applied to injuries, cold sores, and skin infections. An easy way to use it is to soak a cotton ball or some gauze with the tincture, apply it topically, and cover it with a bandage. Change it every couple of hours.

Black walnut is a very powerful remedy for low thyroid. Black walnuts hulls are one of the few reliable sources of iodine in plants that are not growing near the sea. When seaweeds didn't help a thyroid problem, I often found that a concentrated black walnut extract would. I used to think this was just because of the iodine, however, I now understand that many cases of low thyroid are due to an autoimmune disorder—Hashimoto’s thyroiditis—and not to a lack of iodine. Since autoimmune disorders are usually connected with leaky gut, I think that the black walnut is helping to fix the problems in the bowels that are contributing to the autoimmune disease that is affecting the thyroid.

Another interesting use for black walnut is as a remedy for fibromyalgia. I learned about this from my friend and business partner Kimberly Balas. She participated in a study testing a drug against omega-3 essential fatty acids for fibromyalgia. She made an interesting choice and picked black walnut as the placebo. The black walnut and omega-3 outperformed the drug, which is why the study didn’t get published. Later I found out that another herbalist friend and past president of the AHG, K.P. Khalsa had also discovered black walnut helped fibromyalgia. This may be partly due to the iodine in black walnut, because people with fibromyalgia are often low in iodine, but I think there's more to it than that. It has to do with the idea of blood purification.

An Alterative or Blood Purifier 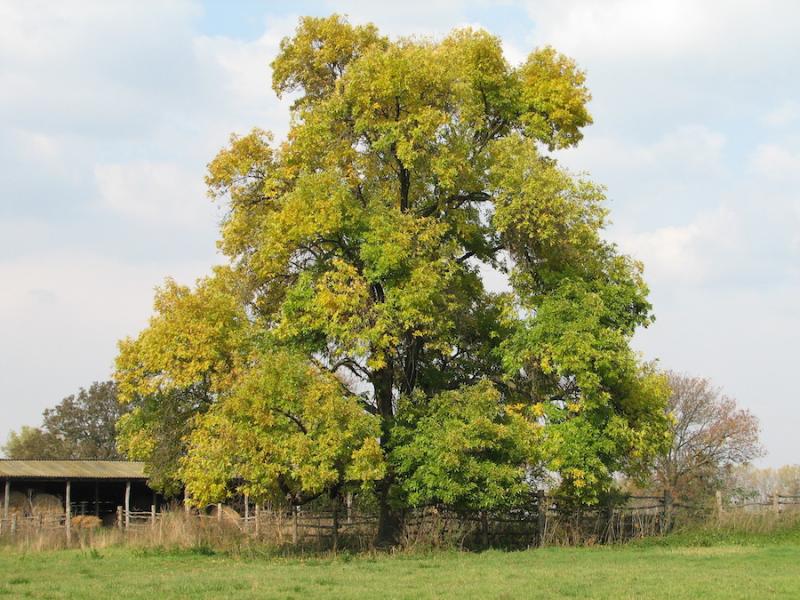 The lymphatics, which could be thought of as the body's waste disposal system, empty into the arteries in the neck right where the thyroid gland sits. The iodine-rich thyroid secretion may act like a water purification system that chlorinates the water before sending it out into the pipes. Matthew Wood comments on this idea in The Earthwise Herbal:

One of the old theories about the thyroid, which we find in alternative medicine back in the 1930s at least, is the idea that the healthy thyroid disperses a small amount of iodine into the carotids, which run by the thyroid. This explains the curious placement of the thyroid. Thus, the antiseptic powers of iodine are used to keep the blood going to the brain clean and pure. This is very important, since the hypothalamus can be confused by "dirty blood" and can't read the hormonal feedback signals correctly or send out good hormonal advice. 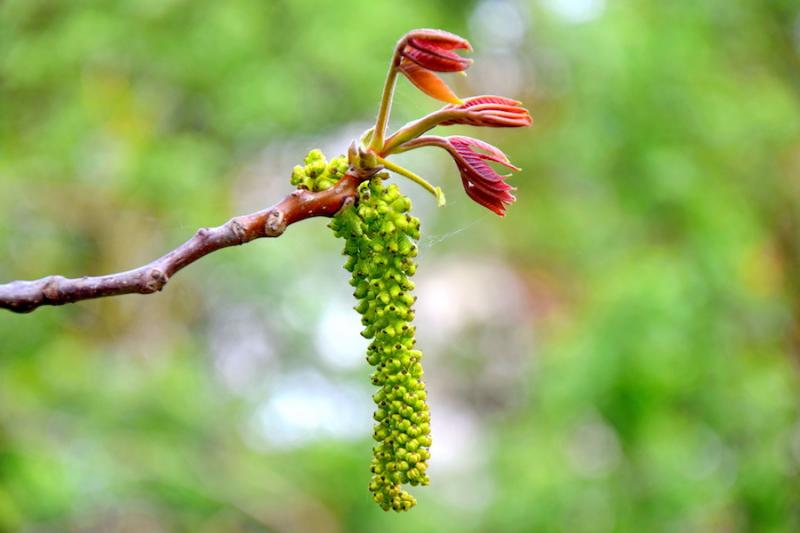 Edward Bach, the developer of the Bach Flower Remedies, selected the English walnut as one of his 38 flower remedies. I would suggest that a flower essence of black walnut would have similar effects. Here’s why.

Juglone also kills plants, which is why very few plants will be seen growing under a black walnut tree. It even inhibits the growth of its own offspring. I once heard Matthew Wood explain this as one of the plant’s energetic signatures. The hull on the nut helps it to bounce and roll away when it hits the ground. If the nut couldn’t get away from the parent, the toxins from the parent tree’s roots would kill the young seedling. This means walnut has an energetic ability to help severe unhealthy connections. 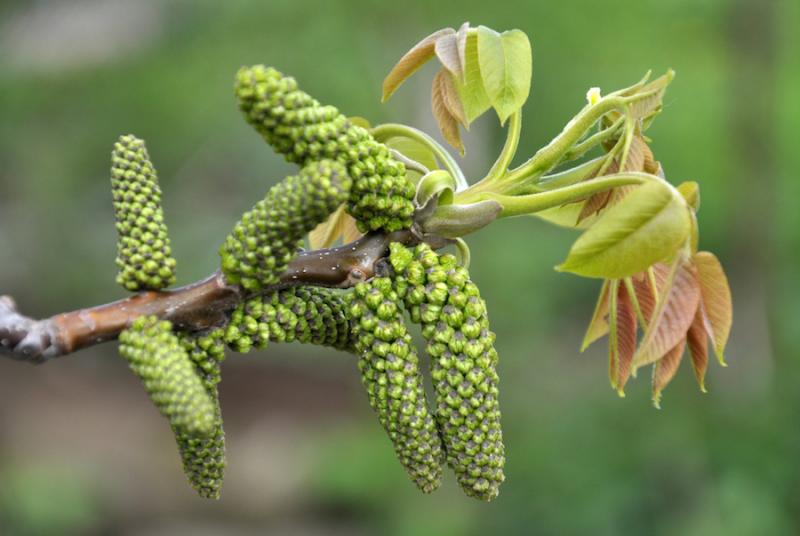 From this signature, we can see how the energy of walnut can help someone who is overly influenced by the beliefs and values of their family or community and is unable to move forward in developing their own life. It’s as if the parents or the cultural mindset have robbed the person of their right to be an individual. Walnut gives people the courage to follow their own path and seek their own destiny. In that way, walnut can be seen as a remedy that gets rid of energetic parasites, not just physical ones. The picture above left is the flowers of black walnut, which are very similar to the flowers of the English walnut used to make the flower essence, pictured right.

The bottom line is that black walnut is a remedy for infections and parasites on the physical plane, but also on the emotional plane as well. It strengthens and fortifies the individual's health and resistance, as well as promotes better energy through aiding the thyroid.