Mustard is More Than a Condiment

An aid to digestion, respiration, and even brightening your mood | January 18, 2022 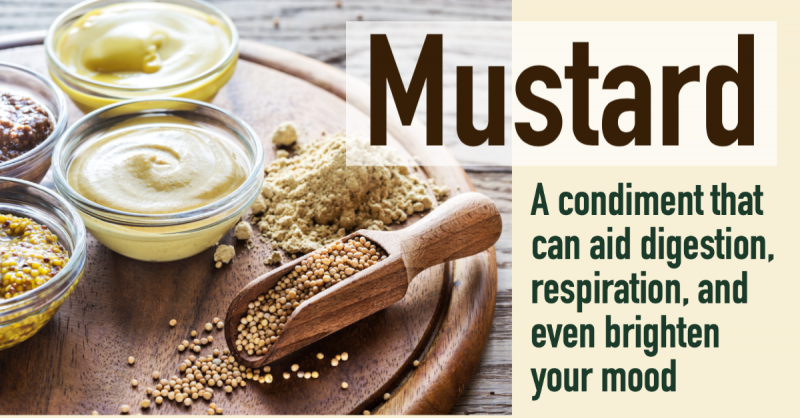 I’m sure that just about everyone has some form of mustard in their fridge or pantry. Along with mayonnaise and ketchup, mustard is one of the most popular condiments in America. And while you probably have mustard on hand, you might not be aware of its medicinal properties.

Like the other members of the mustard family (Brassicaceae), such as horseradish and wasabi, mustard is a sulfurous plant. The sulfur compounds in plants like mustard give them their pungent taste. Sulfur compounds are also responsible for the pungent taste of garlic and onions, and mustard seeds can be used for similar medicinal purposes to both horseradish and garlic.

For starters, sulfur-rich plants like mustard can help with digestion. In the book, Healing Plants by Wilhelm Pelikan, he describes this action as follows.

Sulfur thus supports the ability to take food proteins properly into the human metabolism. This is why herbs and condiments containing sulfur, such as horseradish, chives, mustard, cress, and also onions and garlic, are important additions to protein-rich foods such as meat dishes, cheese dishes, and eggs. 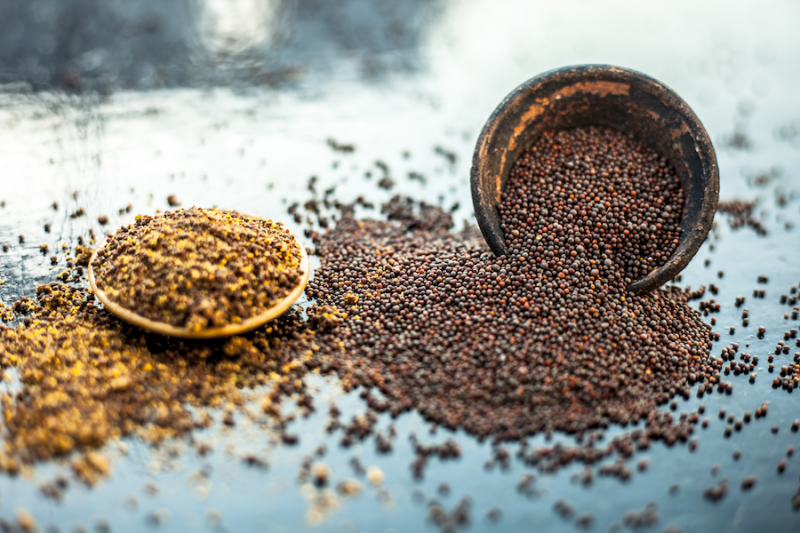 Mustard can also be helpful for respiratory problems. Like many other sulfur-bearing plants, it can help to clear the sinuses. I typically use pungent herbs when I’m congested, including capsicum, ginger, and garlic, but I’ve also found mustard helpful. One time when I was feeling congested, I went to a Chinese restaurant with my wife and ate a lot of the hot Chinese mustard with my food. That opened up my sinuses quite rapidly.

All herbs containing sulfur are also helpful for one of the major detoxification processes in the liver and other cells. Sulfation is the principal pathway for eliminating excess neurotransmitters, several drugs (including acetaminophen, some food additives, and toxins from intestinal bacteria. It also removes many forms of environmental toxins. Reduced sulfation may be involved in Parkinson’s disease, Alzheimer’s disease, other nervous system disorders, and environmental illness.

Plants in the mustard family, like mustard, are called also crucifers (as the family was once known as Cruciferacea). That’s where the term cruciferous comes from, as in cruciferous vegetables. These vegetables from the mustard family, including cabbage, broccoli, cauliflower, turnips, turnip greens, kale, radishes, and mustard greens, are all known to help reduce the risk of cancer. This appears to be related to their ability to enhance sulfation, and perhaps other pathways of liver detoxification.

If you’re going to use mustard internally as medicine, you can use either the white (Brassica alba) or black (B. nigra) seeds. The former is used to make yellow mustard and the latter brown mustard. You want a stronger, hotter mustard for medicinal use. The typical mustard used on hot dogs is OK, but not strong enough to clear congestion or support weak digestion. You can actually swallow about a half teaspoon of the unground, whole seeds several times a day.

Mustard is very helpful for stimulating digestion in people who have problems digesting proteins or fats and have a heavy feeling on the stomach after eating them. It’s also helpful for people with poor digestion who suffer from sinusitis, asthma, or shortness of breath. 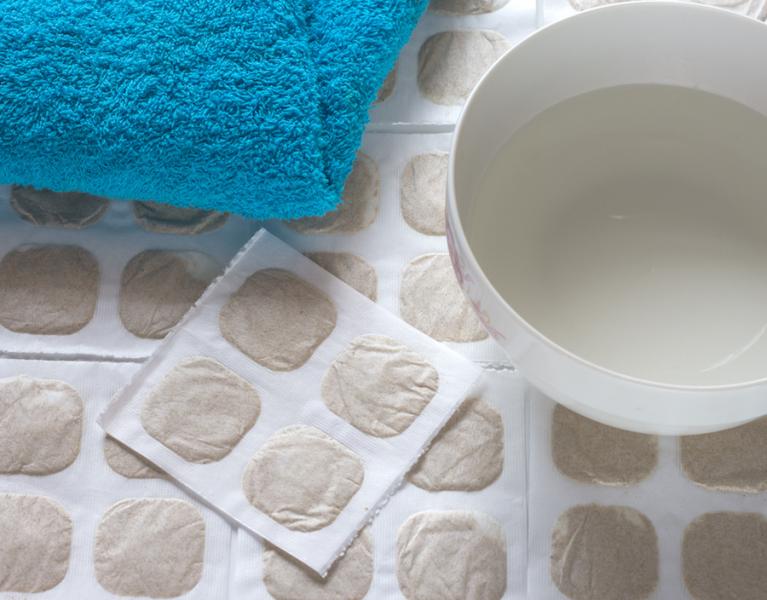 Mustard has been traditionally used to make mustard plasters. These are typically applied to the chest to help relieve congestion in the lungs, including pneumonia. They can also be applied to ease pain in arthritic joints. You can buy commercially made mustard plasters, or you can make your own. Here’s a recipe.

Mix one-quarter cup of ground mustard seeds with one cup of flour and add enough water to make a paste. Put the paste inside a thin cloth. Coat the skin with olive oil, then place the cloth containing the mustard paste over the skin. Put a warm, wet towel over the mustard plaster. Cover this with a dry cloth or a piece of plastic. Check the mustard plaster frequently to make sure it isn’t irritating (burning) the skin.

I've personally never tried making a mustard plaster. I prefer diluting essential oils in a carrier oil and massaging it into the afflicted areas. I think it's easier and has less chance of irritating the skin, but it's good to know things you can do if your usual remedies aren't available. 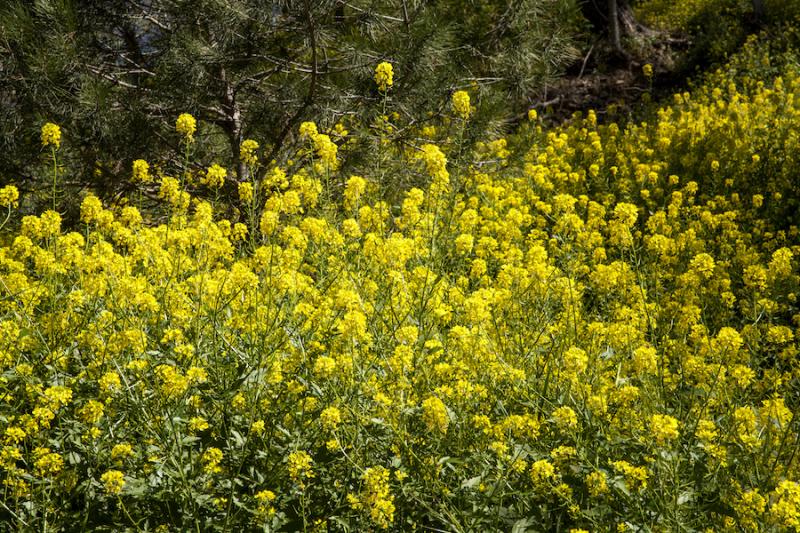 Members of the mustard family tend to germinate rapidly, develop strong roots and abundant foliage, and produce blossoms that are typically white or yellow. They often grow in places that are not hospitable to other plants, such as roadsides, deserts, beaches, and so forth in temperate regions.

This also appears to bear the signature of sulfur, which is traditionally associated with heat and fire. Returning to the book Healing Plants, Wilhelm Pelikan writes, “The crucifer style of life is to actually seek out powerful light forces—in steppes and deserts, in the long days of the North, or in the powerful light found in mountain heights… They belong to spring and early summer, with repeated cycles of germination, flowering, and fruiting, enabling them to achieve several generations in a year, so rapid, energetic, and indeed heated is the rhythm of their life.” He also adds, “The deeds of light, the active colors of white, yellow, and orange are favored by crucifers…”

I see many species of mustard flowers blooming in the early spring here in Utah, where they rapidly grow, flower, and fruit before the summer gets too hot and the soil too dry. Nearly all of them have white or yellow flowers. Thus, they are some of the first plants to emerge after the cold of winter. One other interesting characteristic is that none of them are poisonous. I wouldn’t go so far as to say they are all edible, but I routinely taste all of them and find that sulfur flavor in all of them to one degree or another.

All of this points to the traditional use of mustard as an emotional remedy. It is heating, warming, enlivening, and lifting. It promotes a sunny, positive nature. It can help people who are depressed, downcast, or filled with despair to rise out of their gloominess and darkness. 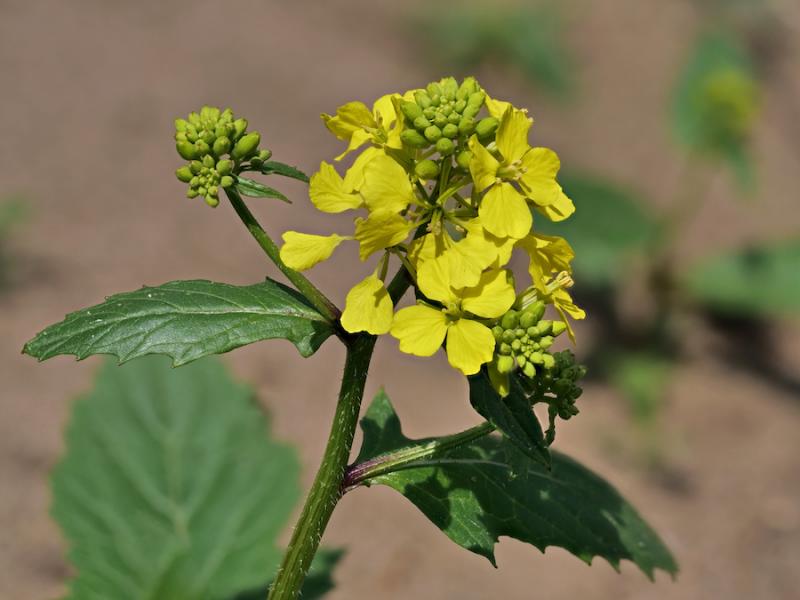 Mustard is one of the original Bach flower remedies. Edward Bach used a different species, Sinapis arvensis, pictured right, for his flower essence, but I think the plants used to make the condiment mustard, have similar qualities. Mustard flower essence is helpful for people who are melancholic, gloomy, or suffer from depression without an obvious cause. The person may suddenly feel overpowered by gloom or despair for no apparent reason. Things people say or do may be triggering past trauma in the subconscious mind that the person isn’t consciously aware of. They just feel the effects of it.

Mustard flower essence sheds light into the darkness and helps to dispel the gloom. It can help people resolve their depression or manic-depressive mood swings bringing warmth, light, and balance into their lives. It promotes light-hearted and joyful feelings like the tiny white and yellow flowers of the spring-blooming mustard family plants I encounter every year.

So, next time you squeeze some mustard onto a hot dog or sandwich or add some to a potato salad or other dish, remember that there’s a medicinal reason for doing so. You’re making the food easier to digest. And, should you need a little help with respiratory congestion or simply feeling down, those mustard seeds in your spice cabinet could come in handy, too.