Chaparral: A Healing Shrub from the Southwest Deserts

This scraggy-looking bush has powerful antioxidant, anticancer, antiviral, and detoxifying properties - May 28, 2021 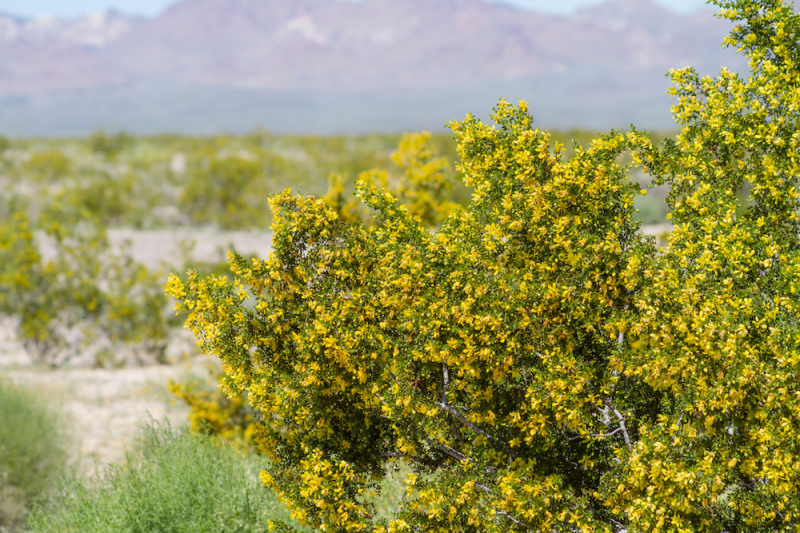 In the deserts near where I live grows a scraggy-looking bush known as chaparral, Larrea tridentata. It’s neither tasty nor pleasant smelling, but it does produce bright yellow flowers in the spring. The odor is someone reminiscent of road tar (hence the other common name for it, creosote bush). The herb is coated with a sticky resin that protects the plant from UV radiation, reduces water loss, and discourages or outright poisons insects and herbivores who try to eat it.

A compound was discovered in the plant, which may account for some of chaparral’s health benefits— nordihydroguaiaretic acid (NDGA). NDGA is a powerful antioxidant and was even used as a food preservative for a time. The plant as a whole is anti-inflammatory, expectorant, diuretic, and antifungal and is one of the better anticancer herbs. It was used by native tribes in the southwestern United States for cancer and for many conditions, including arthritis, asthma, fevers, infections, and skin eruptive diseases.

Chaparral, like comfrey, is an herb shrouded in controversy. It’s been traditionally used to fight cancer, but the medical association says there isn’t enough evidence to support this use. Like comfrey, it’s been purported to be toxic to the liver, which is why it’s harder to find commercially than it used to be. So, I’m going to approach this herb by telling you a few stories.

In the 1980s, my friend Carl Robinson told me that he had talked to a researcher who had worked on a study done in Utah on the effectiveness of chaparral against cancer. The researcher told him that the studies were showing positive benefits when the research was shut down and everyone was told to bury the research and not publish it.

I know there are people who are skeptical of such stories, but I think there is huge economic pressure from the multi-billion dollar cancer treatment industry to suppress information about effective alternative cancer therapies, especially herbs. For example, a couple of years ago, a medical doctor in Canada, who runs a holistic cancer center, told about his experience posting research on Wikipedia that done in Europe about a very inexpensive and safe drug that worked on a variety of cancers. The information was taken down twice by editors and he was warned not to post it again or his status as a Wikipedia editor would be revoked. 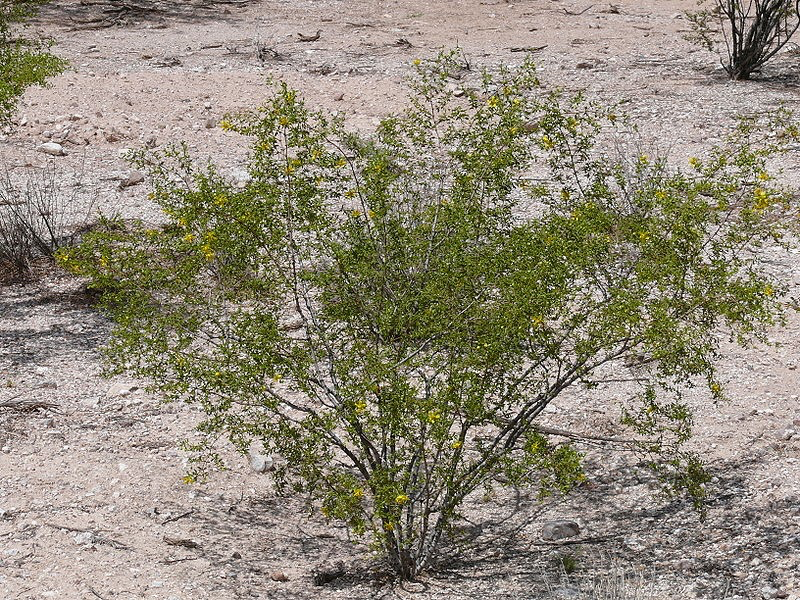 I also heard an herbalist friend relate a story about the Native Americans living on the Shivwit-Paiute Indian Reservation just west of St. George, Utah. He said that in the 1950s that some of the tribal members would go on top of the mountain to watch nuclear blasts a little over a hundred miles away in the Nevada desert. According to the story, many of the tribal members who watched the blasts died of cancer, but not those who were regularly drinking chaparral tea.

This calls to mind a question I was once asked on an herb walk. The person wanted to know what herbs I’d use in the aftermath of a nuclear war. I told him that I’d look around and see what plants were thriving in the aftermath and use them. I’ve read that chaparral was one of the first plants to grow back in those areas where they did the nuclear testing, which means, I’d definitely be harvesting and using chaparral if there was any sort of nuclear event (atomic bombs, dirty bombs, or a reactor failure) anywhere near where I live. (I’d also be taking potassium iodide in very large doses.) 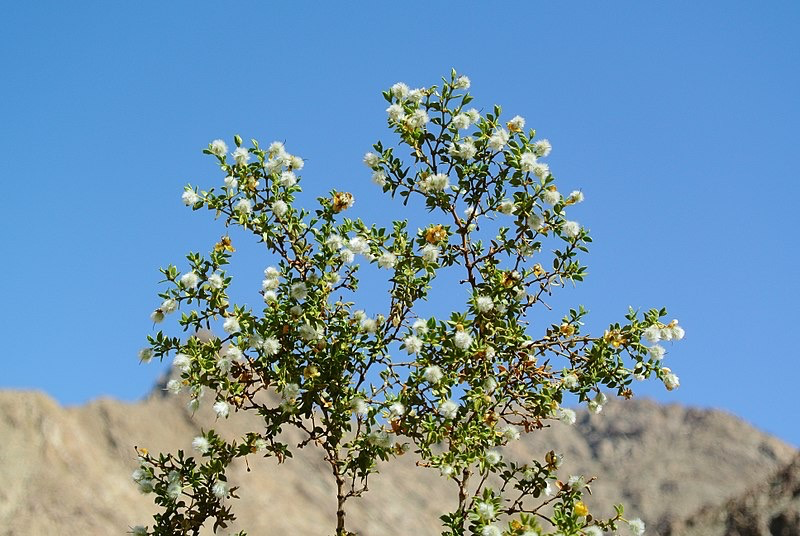 And, although I can’t prove it, I have this strong sense that chaparral is also very helpful for clearing petrochemical solvents out of the body, which is the topic of another interesting story. I was doing an emotional healing session with a woman and it came up that while she was growing up her guardians were quite abusive to her. One of the things they had her do as a small child was to carry pails filled with gasoline for use in their tortilla factory. The gasoline would slosh around in the bucket and would frequently splash onto her stomach. She has suffered from major digestive issues her whole life, which I felt were partly caused by the toxicity of the gasoline.

As she was relating these experiences in her life, chaparral kept coming into my mind. I pay attention to this sort of inspiration, so after the session, I told her that I kept getting the sense that chaparral would be helpful in healing her body from the damage done by the gasoline. She responded that this was interesting because there was a chaparral plant growing on the median strip in front of the home where she lived. She told me she felt the plant calling to her to use it, but she’d dismissed the impression thinking that the plant was growing where it would be contaminated with gasoline fumes from the cars driving by. I told her to follow her instincts and start using the chaparral. Since I was never able to follow-up with her I don't know if she used the plant or not, but it did leave me the impression that chaparral might be helpful for this kind of chemical poisoning. 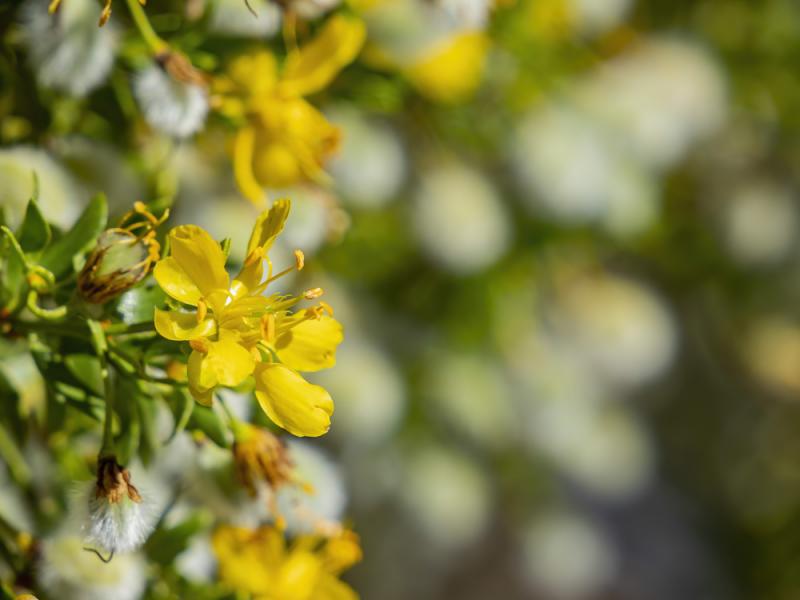 I’ve had a few experiences with chaparral as a flower essence, too. The flower essence is indicated in psychic toxicity, evidenced by disturbing dreams and nightmares, as well as flashbacks from traumatic events. If you’ve ever had disturbing images in your mind after watching violence in a movie, that’s the kind of thing we’re talking about. It’s also helpful for drug addiction, including medical drugs used to treat mental illness. It helps a person process and clear these disturbing thoughts and images from the mind.

The flower essence can be helpful for drug withdrawal, particularly in people who started using drugs because of PTSD. I think the herb might be helpful in clearing the drugs from the system.

I need to address the safety of chaparral. Any herb that tastes and smells as bad as chaparral isn’t a food. It’s a potent medicine and needs to be regarded as such. It was traditionally taken as a tea, which means you could probably never bring yourself to take too much of it, but in capsules and even tincture form, it’s easier to take more than is necessary and even possibly harmful amounts.

I think it’s a perfectly safe remedy to use for detoxification, cancer, and even serious viral infections, but I would only use it until the problem cleared up. The evidence for its toxicity remains anecdotal, which is why the FDA has not removed chaparral from the marketplace (at least not yet).

As an example of what I mean by anecdotal, one of the reports of toxicity that started the chaparral-scare was a 60-year old woman who was taking two capsules of chaparral daily and developed jaundice and liver failure. As is typical of these cases, the problems were blamed on the herb, even though she was also taking a number of drug medications with known hepatotoxicity. On the other hand, there are studies involving chaparral that noted no evidence of hepatoxicity.

Chaparral is not widely available commercially because herb companies don't want to expose themselves to risk. If an herb is reported to be potentially toxic and someone claims it harmed them, they can sue the company, so most companies have voluntarily pulled it from the market. It’s why I don’t recommend it very often, either, except as a flower remedy.

So, why am I talking about it? It’s because there’s this prophecy I remember hearing about from my pioneer ancestors. It was about four herbs that would save millions of people from plagues in the last days. Unfortunately, I can’t find the original source and I only remember two of the herbs. One was yarrow and the other chaparral. A number of people have asked me about possible remedies for people who have experienced adverse reactions to a recently introduced vaccine. I’ve been praying and meditating about this, and one remedy I’d like to try is chaparral. If any of you try using chaparral I'd love to hear about what you tried and how it worked out.

Meanwhile, with all that’s going on in this world, it’s a good idea to be aware of powerful remedies you might be able to harvest and use in the future. With the threat of increasing environmental toxicity, new viral infections, and radiation exposure, as well as the emotional trauma associated with increasing violence and chaos, chaparral is a good remedy with which to be familiar and something you just may want to keep in your emergency supplies.