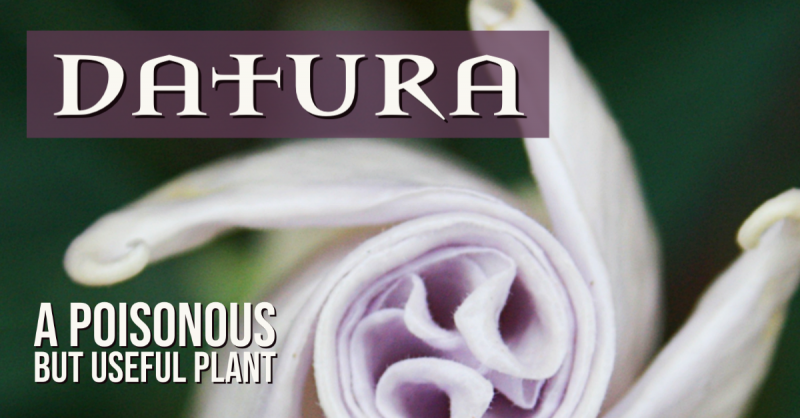 One of the things I enjoy about where I live is how close it is to Zion National Park. I've enjoyed hiking there pretty much every year since I moved here in 2000. One time I was heading back down the River Walk trail in the evening. It was dark, and the air was filled with an intoxicating aroma. It took me awhile to figure out that I was smelling the aroma from hundreds of datura flowers that had opened up in the cool night air.

Datura stramonium or D. writghtii, also known as Jimson weed or thornapple is common where I live. According to some sources, if you put a flower or two next to you while sleeping, you’ll have very vivid and lucid dreams. I’ve never tried doing this, but I certainly believe it would do this, as the fragrance from those flowers that night put me into an almost dream-like state of mind. Plus, the plant itself is hallucinogenic. It's also poisonous!

In fact, thousands of people are hospitalized, and hundreds die every year seeking to get high. So, while there are safe medicinal and emotional uses for Datura, it’s not an herb with which to experiment. Pay close attention to everything I say about it in this article.

Datura is a member of the nightshade family, Solanaceae. This family includes some major foods like potatoes, tomatoes, and bell peppers, and useful herbs like lycium (wolfberry or goji berry), capsicum, and ashwagandha, but it’s also a family that’s full of poisonous plants, including poisonous parts of its food plants. 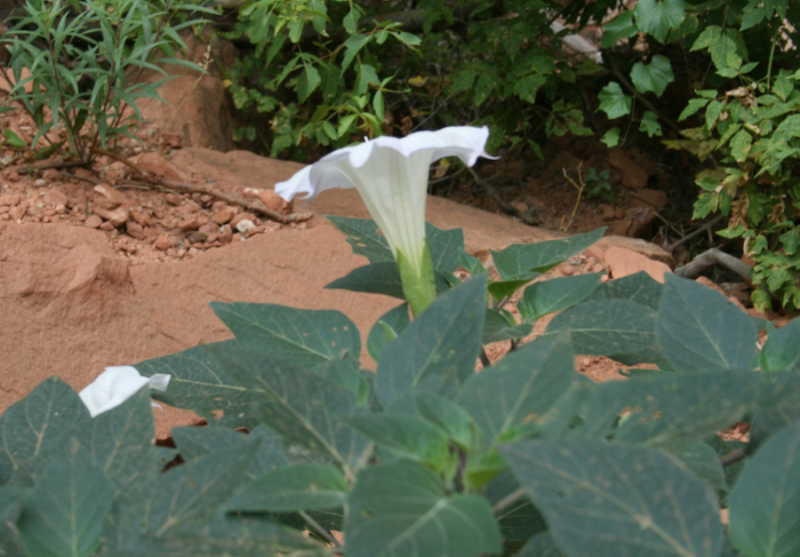 Datura is one of three toxic botanicals from this family that have been used medicinally, all of which contain tropine alkaloids. These plants are datura, deadly nightshade (Atropa belladonna), and henbane (Hyoscyamus niger). The alkaloids they contain include atropine, scopolamine, and hyoscyamine, all of which act as anticholinergic drugs. This means they attach to receptors for the neurotransmitter acetylcholine and inhibit its action. In practical terms, it means they dilate your pupils, inhibit muscular contraction, dilate the bronchial passages, and inhibit digestive secretions.

I first ran into the use of datura as a medicinal plant in the 1980s, when the botanist at Nature’s Sunshine Products was researching the toxicity of lobelia. In spite of the claims that lobelia has caused “convulsions, coma, and death,” she could only find two instances of death attributed to the use of lobelia. One was a man who had a bleeding ulcer, which tore when he used lobelia to make himself throw up, and the other was a lady who had smoked cigarettes made from lobelia and datura for twenty years to relieve her asthma.

Despite its toxicity, datura has long been smoked as a medicine for asthma. According to southwest herbalist Michael Moore, the dried leaf was traditionally combined with equal parts potassium nitrate (saltpeter), ignited, and inhaled. He also suggested making cigarettes by combining it with herbs like sage, mullein leaf, raspberry leaf, or coltsfoot leaves. A few puffs deliver the alkaloids to the mucus membranes of the lungs where they dilate the bronchial passages much like an epinephrine inhaler. This avoids the more serious negative effects because it doesn’t put the alkaloids into the bloodstream as ingesting the plant would. Similar uses can be found in A Modern Herbal by M. Grieve, who suggests that many other species of Datura can be used in a similar manner.

Despite its historical use, smoking datura is still toxic, so I'd only use it for asthma as a last resort. Unlike most of the information I share this isn't an herb to casually experiment with. I'd only consider using datura if there was a widespread disaster and a modern inhaler wasn't available and there were no other options.

Datura is a Bad High 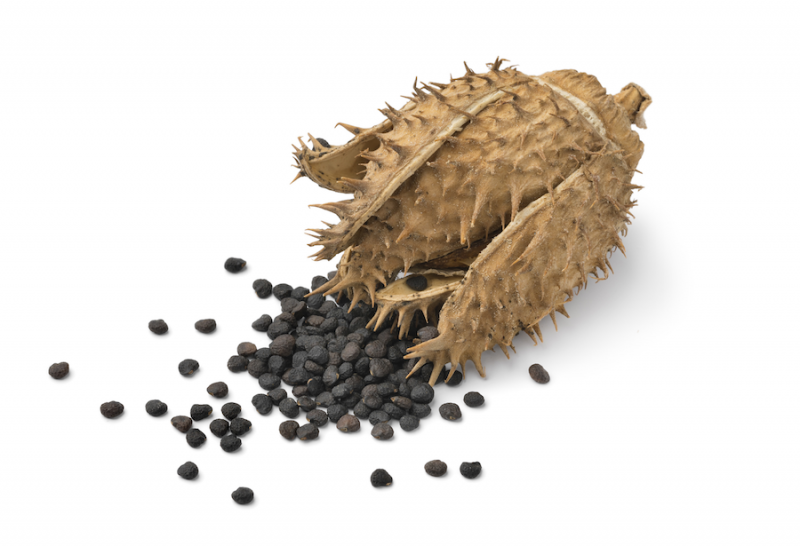 While Datura is a hallucinogen, it is terrible idea to try use it to get high. Of course, it's poisonous whether ingested or smoked. I’ll share with you what Michael Moore says about it in Medicinal Plants of the Mountain West, as he had practical experience with it.

…Jimsomweed will make anyone feel absolutely wretched when taken internally. Once…I smoked some leaves… I remember trying to scratch a head itch and slapping my knee instead. While driving a friend home at 1 AM I nearly ran over the only pedestrian within five miles, while driving slowly on the wrong side of the road. Further, I had trouble seeing greens, yellows, and blues for two days afterwords. Blech.

In an article about datura poisoning on the Pacific School of Herbal Medicine website the author relates how they periodically get calls about someone experiencing toxic effects from ingesting datura seeds. After reading the description of the symptoms I know that I wouldn't use this plant internally.

These callers would like to keep this child or young adult out of the hospital. However, the adolescent's (and it usually is an adolescent who ingests datura seeds) caretaker, if not the caller, can't cope with the youth's wild, often violent agitation, and all engulfing delirious hallucinations. The youth is often flushed red, with dry throat, mouth and eyes, heart beating irregularly. This can last for days.

The article says that the “antidote of choice is physostigmine salicylate, trade name Antilrium.” You can read the article yourself if you want to learn more about treating datura poisoning.

The safest use of datura is topical. It has an anti-inflammatory and analgesic action and has been used topically in a variety of ways for arthritic joints, neuralgia, and muscular pains. The easiest way to use it is to crush the fresh leaves and apply them topically. The fresh leaves are stronger than the dried leaves. You can simmer the fresh or dried leaves and use the decoction as a soak, but don’t soak the area too long, because you'll absorb too many of the toxic alkaloids. The chopped leaves can also be made into a liniment by soaking them in rubbing alcohol for a week or two. You can also add capsicum or other herbs used in liniments to the tincture.

Datura has also been used as a homeopathic remedy. Homeopathics are used to correct the symptoms caused by ingesting a large amount of a substance. So, homeopathic datura can be used for people who are delirious or suffering from hallucinations. It can help people who change moods rapidly and fear being alone and in the dark. Physical indications for homeopathic datura include loss of vision, dilated pupils, vomiting sparked by bright lights, and difficulty urinating. The homeopathic remedy is called stramonium and you can read more about its use here. 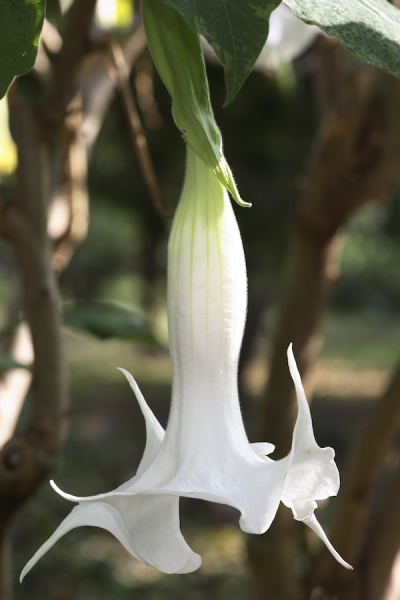 In her book, Flower Power, Anne McIntyre provides a description of the flower essence for Datura meteloides. She says it is helpful for those who feel "confused, disoriented, unearthed, detached from reality, or in a dream-like state." It's also helpful for people going through major transitions that have upset the regular pattern of their life, which result in shattered dreams or illusions. FES Services makes a flower essence from a different, but related plant (Brugmansia x Candida) pictured left.

Here are my insights into the nature of Datura as an emotional remedy. Datura blooms as the sun sets, although the blossoms will persist until the next day. Its energy, therefore, is of the night, just like the nightshade family to which it belongs. Its energy is also dreamy, an energy not of this world, more transcendent than earthly. That's also related to its hallucinogenic nature.

One of the major indications for the FES flower essence Angel’s Trumpet is to help people who are afraid of death. It is specifically helpful for people who are dying, enabling them to surrender to this transition from the earthly to the spiritual world. However, this effect isn't limited to death. It can be helpful for any difficult life transition where one is moving into times of darkness and tragedy. That's similar to Anne McIntyre's indications. If you've ever had an experience that shocked you so badly that you felt unearthed, dazed, confused, and disoriented, that's an indication for datura as a flower remedy.

People who are shaken so seriously in life may turn to drugs. The "high" they are seeking is actually an attempt to escape from the reality of their disturbed life and a numbing of the pain they are in. Angel's trumpet flower essence helps people surrender to these difficult life changes and place their trust in the spiritual world. It also helps those who doubt the existence of that spiritual world. It aids surrender and transformation. 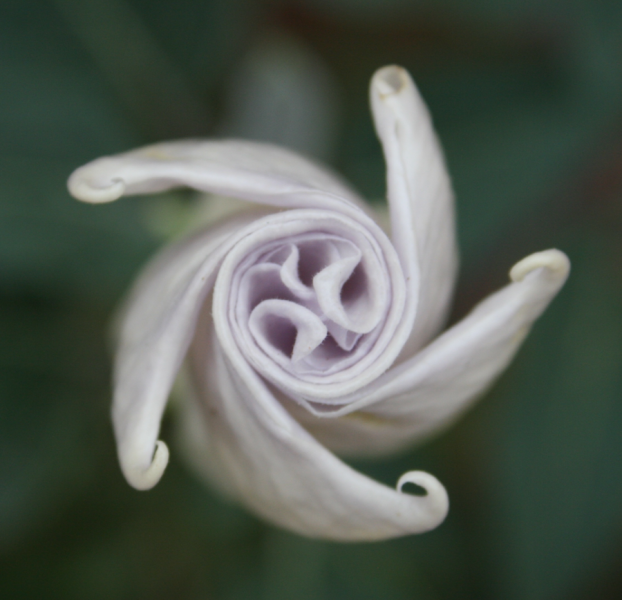 So, you could try using datura, either as a flower remedy or by using it in aromatherapy (placing the flowers near you so you smell them as you sleep). I think datura could help you bloom in the midst of the difficulties you are experiencing, just as datura blooms at sundown when it gets dark. The picture on the right is one I took of an unopened datura flower bud waiting to unfold. It would also help you trust that the day will come again, just as the flowers persist into the next day. After all, whether the dark times in our lives help us grow, or defeat us, depends on how we perceive them. If we seek Divine help they become stepping stones. If we try to escape and avoid them, they become stumbling blocks.

Datura is an unusual herb to discuss. It’s not a herb remedy that you can got out and buy and because it is poisonous and I don't recommend experimenting with it either. With that said, I think it is important explore this amazing world of medicinal plants. I’m hoping to take you on a deeper journey that will help you better understand the amazing power of plants and our connections to them. In that light, may your dreams be vivid ones that help you rise above the troubles of your life and help you find transcendent spiritual purpose. May you engage life in faith, instead of seeking to escape it in fear.