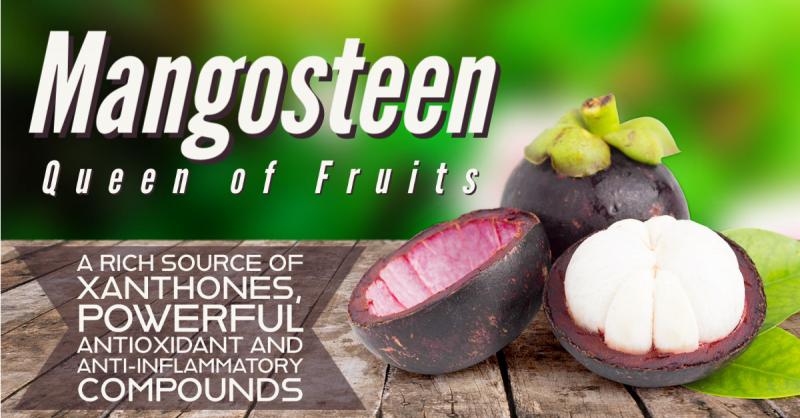 Sometimes called the queen of fruits, mangosteen is a tropical fruit that is consumed in Asia and other parts of the world. As a fruit, they haven’t caught on in North America. I’ve never seen them at the grocery store, fresh or preserved, even though they are commonly found canned, frozen, and dried in other countries. I’ve seen and eaten some of the fresh fruits when I was lecturing in England. They were delicious.

So, mangosteen is one of those herbs I’m primarily familiar with as a part of various formulas, and from researching its properties. But I’m also familiar with the health benefits of a group of compounds found in it called xanthones.

There are about 200 xanthone compounds found in nature and over 1000 scientific papers have been published on their structures, bioactivities, and pharmacological benefits. The rind or pericarp of the mangosteen fruit (sort of like a thick orange peel) contains a polyhydroxy-xanthone derivative termed mangostin and another xanthone called beta-mangostin. The fully ripe fruits contain the xanthones gartanin, 8-desoxygartanin, and normangostin.

I had the opportunity to explore and learn more in depth about xanthones when I assisted Kimberly Balas with a project about twenty years ago. She was consulting for a company that was designing a line of products containing xanthone extracts. Kim was able to get some of the raw material to try it with clients, as well as digging into the research that’s been done on these compounds. 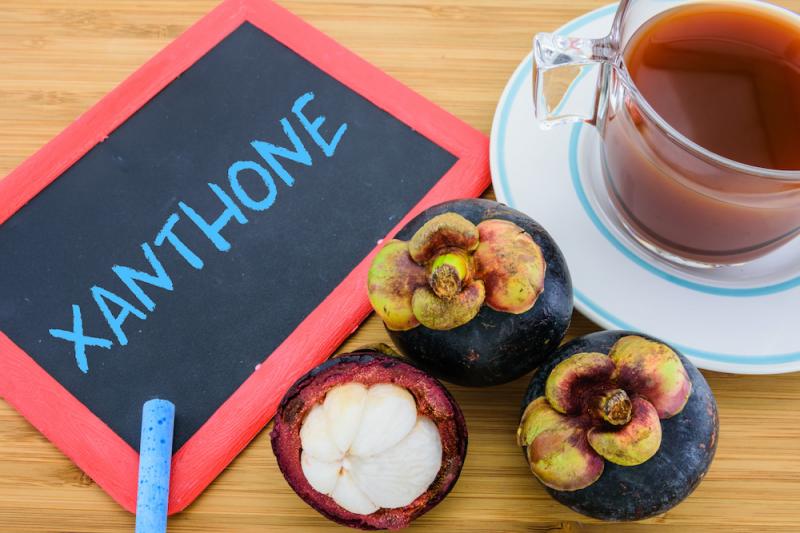 In my limited experience, I find that mangosteen is primarily helpful for reducing inflammation and allergic reactions. An extract of the pericarp is an important ingredient in one of an Anti-Inflammatory Pain Formula I use for reducing inflammation after surgery or injury. It combines mangosteen pericarp extract with extracts of willow bark, boswellia, turmeric, and andrographis.

For example, following my gallbladder surgery twelve years ago I stopped taking the pain medications they gave me just one day after I came home because I hated the side effects. Instead I took four capsules of this formula every two hours until the pain subsided (about six hours) and then four capsules three times a day for a couple of days thereafter.

I also gave it to my office manager following extensive dental surgery. A week following the surgery her mouth was still swollen and painful. Two days after taking this Anti-Inflammatory Pain Formula the swelling and pain were gone. I’ve also observed that the same formula speeds the healing process in the damaged tissues. 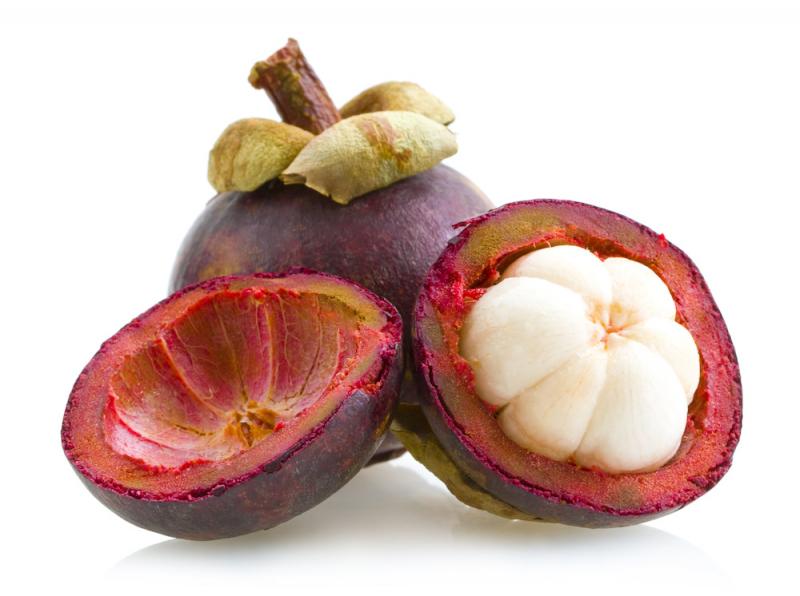 I know that mangosteen extract plays an important role in this effect because when Kim was experimenting with the xanthones she found it very helpful for pain. In fact, we had proposed using the xanthones as part of an herbal formula for pain.

We also looked into using xanthones in an anti-allergy formula, and formulas for protecting the heart and cardiovascular system. Unfortunately, the company didn’t get off the ground, but I’ve never forgotten what we learned about xanthones.

Based on that experience, I’ve used an Antioxidant Formula in beverage form (combining mangosteen fruit and pericarp extract with lycium, açaí, pomegranate, grape seed, sea buckthorn, green tea, and other antioxidant berries) to reduce allergic reactions, boost energy, cool the body down in the hot summer, reduce chronic inflammation, and promote general health. For energy, I take it with liquid chlorophyll. For heat and allergic reactions, I add some to fresh lemonade made with real maple syrup.

Even though mangosteen has received the most publicity for its xanthone and antioxidant properties, according to one article I found xanthones are widely distributed in various medicinal herbs. “So far, 168 species of herbal plants belong to 58 genera, 24 families have been reported to contain xanthones. Among them, Calophyllum, Cratoxylum, Cudrania, Garcinia, Gentiana, Hypericum, and Swertia genera are plant resources with great development prospect.”

Hypericum is the genus for St. John’s wort, which belongs to the same botanical family as mangosteen Guttiferae. If you search for “hypericum xanthones” you’ll find articles showing that a variety of hypericum species contain xanthones.

There’s a lot we can still learn about how the compounds present in our medicinal herbs work, but we don't we have to wait for science explain the how in order to use them. Xanthones are not the only reason mangosteen is beneficial. Like any other fruit, it contains vitamins, minerals, fiber, and other beneficial substances. And, discovering that xanthones may be contributing to the action of other herbs we’re familiar with, such as St. John’s wort, doesn’t change what herbalists have observed these plants do over many generations.

Meanwhile, I'll continue to use mangosteen as a medicinal herb and look forward to finding and trying some fresh mangosteen fruits again because they were delicious! So, if you happen to see some for sale somewhere, don't miss out on giving them a try.