The Beautiful and Useful Quaking Aspen

Aspen and other members of the poplar genus are valuable, but seldom-used, herbal remedies | October 4, 2022 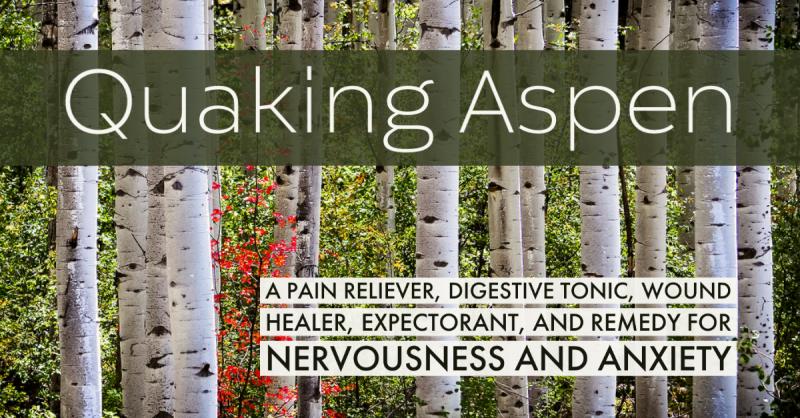 It’s fall and up in the mountains, the aspen leaves are turning golden. I love to see their white trunks and gold leaves against a clear blue autumn sky. I once wrote a poem about holding an aspen leaf wherein I called it an autumn treasure.

Although not widely used, aspen is a valuable herbal remedy, both physically and emotionally, as are the other members of the poplar genus. The Western quacking aspen is Populus tremuloides and there’s also a European aspen species, P. tremula. Both Latin names refer to how easily aspen leaves tremble (or quiver) in the slightest breeze. Most leaves have round petioles (the leaf stalk), but the petiole in aspen leaves is flat so it bends more easily in the wind. This is an important signature of aspen’s use as a flower remedy. 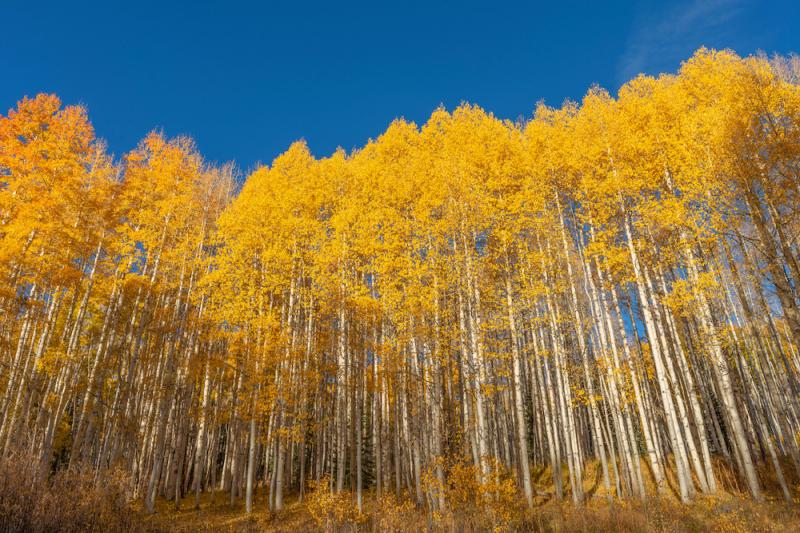 Being a poplar, aspen is in the willow family. Poplars and willows share similar analgesic properties because they all contain salicylates, the plant forerunner to modern aspirin. Aspen leaves, leaf buds, and bark contain salicylates. All of them can be used to ease pain both topically and internally, but I find that the strongest aspirin flavor comes from the buds and bark.

However, just about any species of poplar will have similar uses. For instance, here in the West we commonly see another species of poplar, the Fremont cottonwood (P. fremontii) growing on the banks of rivers. Its buds definitely have an aspirin flavor. Native American Ethnobotany by Daniel E. Moerman lists both quaking aspen and Fremont cottonwood as medicinal trees used by Native Americans. It also lists seven other poplar species, the most important ones being the balsam poplar (P. balsamifera) and the Eastern cottonwood (P. deltoides). Much of what I write in this article about the medicinal uses of quaking aspen will apply to all of these other poplar species.

Quaking aspen leaves and bark can be used internally to ease pain for the same conditions for which you’d use aspirin—muscle and joint pain, headaches, and more. The leaves can also be crushed and used as a poultice to relieve pain. It can help wounds to heal and aid skin rashes, sore throats, and minor burns.

In addition to having analgesic properties, the bark is also a digestive tonic and can be helpful for inflammatory bowel disorders and weak digestion, preferably used as part of a digestive bitters formula. It’s helpful for indigestion with gas and acid stomach, weak digestion, and chronic diarrhea. My first herb teacher told me that not only was quaking aspen a good digestive bitter; he claimed it was one of the best.

Besides being the strongest analgesic part, the buds are also a good expectorant for respiratory disorders. They are helpful for thick, difficult-to-expel mucus and chronic respiratory problems. Aspen and other poplars may also be helpful for urinary problems like cystitis, burning or difficult urination, and enlarged prostate./p> 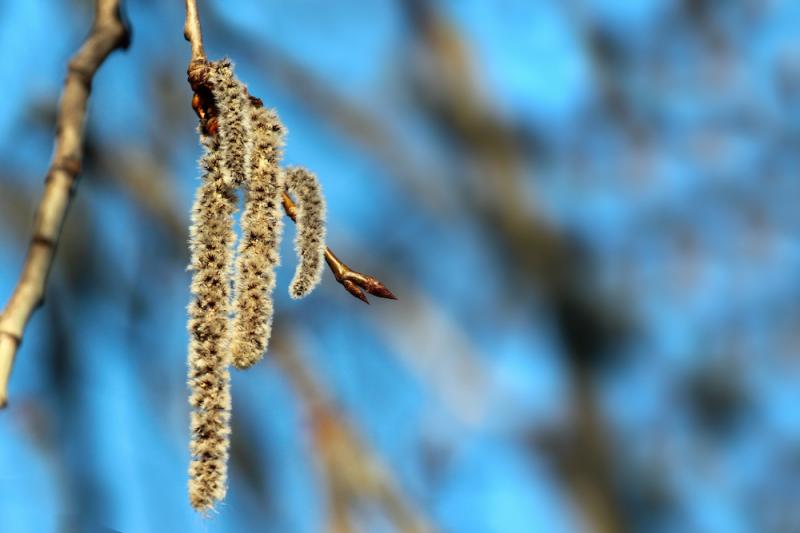 Although the European aspen was used for the Bach flower remedy, I’m going to talk about the signatures of the quaking aspen because I’m more familiar with it. I’ve mentioned how easily aspen leaves are moved by the wind. Yet, in spite of this sensitive nature, aspen trees are fairly sturdy. They grow straight and tall, suggesting a combination of strength and sensitivity./p>

This points to aspen’s use as a remedy for nervousness and fear. It's a remedy specifically targeted at fears with no readily identifiable cause. If you know what you’re afraid of Mimulus is the flower essence you need, but if you are afraid and don't know why you need aspen. Aspen is helpful for shaky feelings, including a shaky feeling in your stomach. It's indicated when your sympathetic nervous system has been overstimulated for a long time and you're feeling run down and depleted as a result.

Excess sympathetic nervous system activity inhibits digestion and elimination, which leads to weakness and debility. The person who needs aspen suffers from chronic fear, nervousness, and anxiety. They're troubled by minor stresses. They need to calm down their fear and find the strength to stand firm as the winds of life blow past them. Matthew Wood suggests it may even be helpful with the nervousness and trembling associated with hyperthyroidism and Parkinson’s disease. 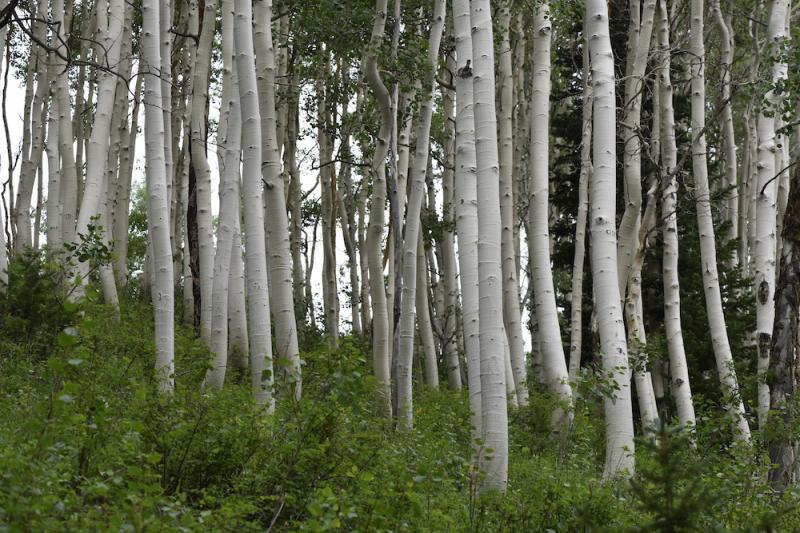 I'd also propose that because quaking aspens grow in groves, there is a community energy to the aspen tree. In fact, there is a single aspen tree in Utah known as the Pando tree. Instead of spreading by seeds, this tree has spread by suckering on lateral roots. The result is a grove of aspen trees that is actually one single living organism. In fact, it's considered the world's largest living organism, covering 105 acres.

I've stood in an aspen grove and listened as a breeze passed through it. The leaves start trembling at one end of the grove and then it moves through the rest of the grove. You can hear it move. Fear can work this way. It starts in one group of people and then spreads to others until most of the population is afraid. I feel this suggests that aspen may help with the social spread of fear. It may also help people cope with difficult times by pulling together as a community instead of spreading the fear. It's an interesting hypothesis that needs to be tested.

Aspen bark peels off the tree easily, which is why you’ll see so many aspen trees with initials carved into them. But I don’t think we should damage trees like this unless it’s an emergency. I harvested some bark from a tree that had been cut down, or you can find freshly broken off branches after a storm (with green leaves still attached). It’s the inner bark you need, not the outer bark, but the outer bark of aspen is thin, so it’s OK if you take all the bark. The bark is best harvested in the spring or fall.

Poplars usually have a hard outer bark, which needs to be removed to get the inner bark. So, in the case of poplars, it’s easier to harvest the buds, which should be collected in the early spring before the leaves come out. The best poplars are the ones with slightly resinous buds, the balsam poplar being the best. 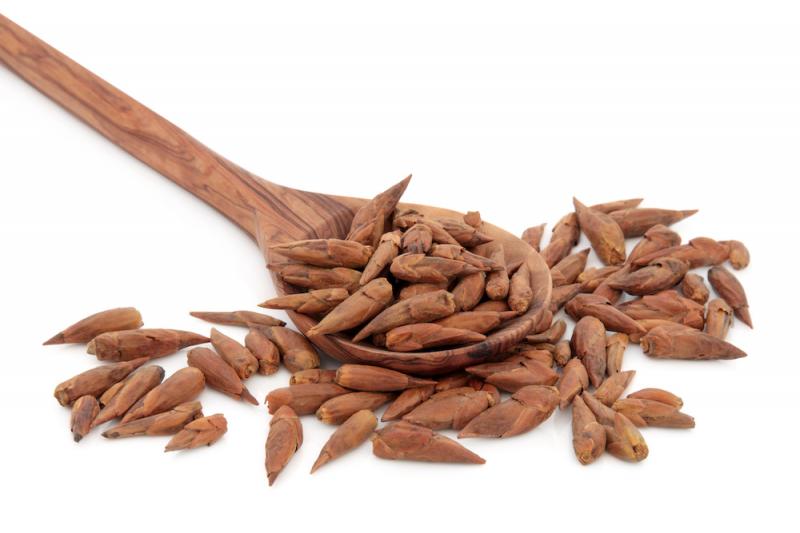 You can make an infusion (tea) from the leaves, but you should make a decoction from the fresh or dried bark. The dose for the decoction is 2-4 ounces up to four times a day, while the infusion is 2-4 ounces up to five times a day. You can also tincture the bark and use 15-30 drops three to five times daily. The buds should be tinctured as the resin in them does not dissolve in water.

The resinous buds can also be extracted in oil to make a lotion or salve for skin problems. Edward Shook in his Advanced Treatise in Herbology recommends making both an oil and an ointment using balsam poplar buds (which he incorrectly calls Balm of Gilead buds). You make the oil by simmering one ounce of the buds in one pint of hot olive oil for one hour. Strain, cool, and bottle. He says this is a good laxative that also heals inflammation of the intestines and aids the gall bladder function (especially when combined with lemon juice).

To make the ointment he boils two ounces of the buds in a quart of water and skims the resin off as it floats to the top. He then mixes three pounds of lanolin with four ounces of caster oil, heats it until the oils blend, and then adds the resin. He claims this is very good for itching, eczema, impetigo, burns, infected wounds, itchy skin, sunburn, chapped hands, dry and scaling skin, and sore feet. He also says it can help with sprains, bruises, and swollen joints.

It's probably good that commercial herbalism hasn’t picked up on the value of aspen as a remedy. I’d hate to see the beautiful aspen groves I love so much decimated by over-harvesting the remedy. But, you can certainly collect enough to use for your own family and local clients. If you don’t have aspen in your area, find out what poplar species do grow in your area and use them.