The Controversy of Comfrey 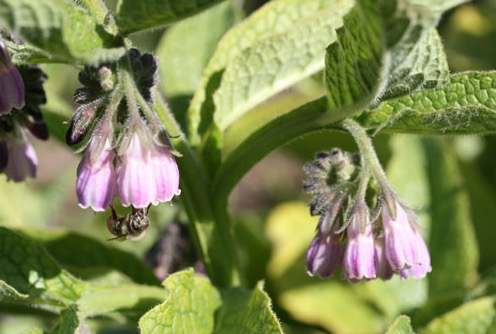 When I started using herbs in the late 70s, comfrey was one of my favorite remedies. In 1978, I broke my wrist in a moped accident; my ulna was broken and my radius was dislocated. After three months they were still not healing properly. So, I started comfrey along with other herbs. I took three capsules of comfrey along with one capsule each of lobelia and capsicum twice daily. In the next couple of weeks, my wrist made dramatic progress after failing to heal for months.

Comfrey leaf was part of the original Herbal Minerals Formula developed by my midwife friend, Joan Patton. She created this formula for pregnant women and claimed it almost completely eliminated complications in her clients. I started using the formula with families, where we observed it helped prevent cavities in children, promoted rapid recovery from injuries, and even seemed to improve the immune system.

At that time, comfrey was a common ingredient in herbal formulas for the structural, respiratory, and digestive systems. A very popular formula was comfrey root and pepsin, which was reported to cleanse the small intestines. Based on what I now know, I think the formula was helping to heal what we now call leaky gut syndrome. It was also helpful for inflammatory bowel disorders. 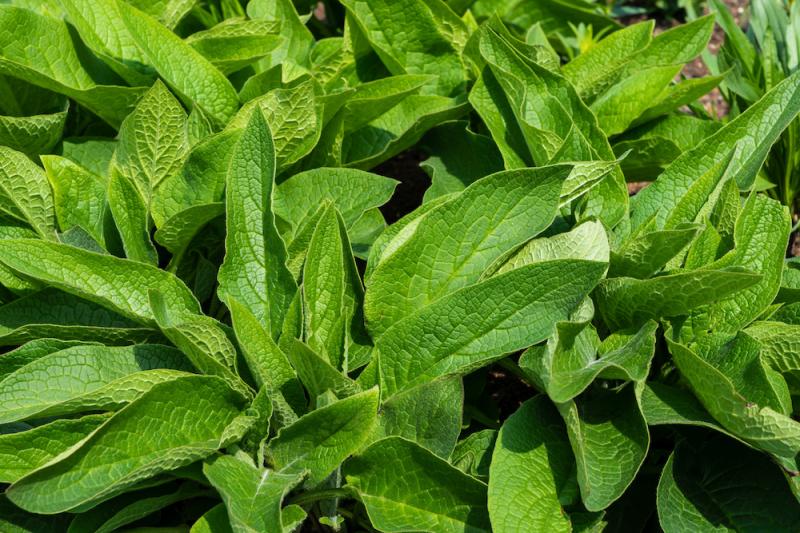 All of this changed in the late 80s when reports about the toxicity of comfrey started to emerge. The concern about comfrey was based on the presence of a class of alkaloids known as pyrrolizidine alkaloids (PAs). PAs are common in the borage family, of which comfrey is a member. The roots contain about 0.3 percent of these alkaloids, while the leaves contain only about 0.15 percent.

Some herbs containing PAs were known to cause a liver disease known as hepatic veno-occlusive disease (VOC). Some are also suspected carcinogens. All of which led to comfrey and several other herbs, like borage and coltsfoot, which herbalists had used safely for centuries, to come under suspicion. The use of comfrey as an internal remedy began to disappear, as herbalists felt compelled to warn people about comfrey’s potential dangers to avoid potential liability for using it. In 2001, the FDA sealed comfrey’s fate by placing a total ban on its internal use.

Under FDA regulations, comfrey is considered safe for topical use, but because there is concern that PAs can be absorbed, comfrey products must carry a warning label cautioning that they should not be applied to broken skin. I think this whole situation has caused us to lose the use of an extremely valuable and very safe remedy. In my experience, omfrey has amazing healing powers with few drawbacks. 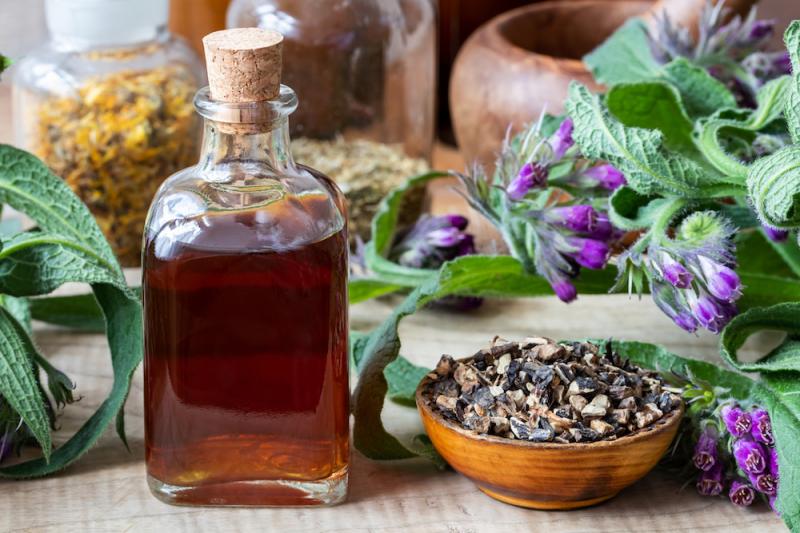 Comfrey is a mucilaginous herb with a slightly astringent quality. The roots are more mucilaginous, the leaves a little more astringent. This combination of mucilant and astringent action helps to balance fluids in tissues, shrinking swollen tissues, moistening dry tissues, and soothing irritated tissues.

What also makes comfrey valuable for tissue healing is its nutritional value. It has a good mineral profile with a high content of calcium, chromium, manganese, potassium, selenium, and silicon, plus a fair amount of magnesium, iron, phosphorus. It’s also high in vitamins A, C, niacin, and riboflavin.

In addition to all this, comfrey contains allantoin which encourages the growth of new cells.This compound causes damaged tissues to heal more rapidly.

All this means comfrey can speed the healing of burns, sprains, wounds, torn ligaments, broken bones, damaged joints, and most other injuries. The exceptions are deep cuts and puncture wounds because comfrey can cause the cells at the top of the wound to grow rapidly, sealing the unhealed bottom of the wound. This can cause the wound to abscess. So, for deep cuts and wounds, calendula or plantain are better as they heal the wound from the bottom up.

In the early 80s I read a story about a nurse and her 14-year old son. It told by the famous herbalist, John Christopher, and I believe it illustrates the amazing healing power of comfrey.;

“Her 14-year-old boy broke his arm, so she rushed him to the Dugway Proving Grounds Hospital to be taken care of, as they are ex-army people. When the doctor X-rayed the arm, he told them the bone was broken so clean that he would have to put the boy into a brace for a few days until knitting started, then into a cast. He put on the brace and told them to come back in five days. The nurse told us she was anxious to get home and use the information she had learned in the lectures on comfrey. The arm was bare so on arriving home she put comfrey poultices and fomentations around the arm. She gave him comfrey tea, comfrey green drink, comfrey tablets, and capsules, and put comfrey into his salads and steamed comfrey as a vegetable—in fact, she got comfrey into him every way she could think of.
“In five-days she took him back to Dugway to get the cast on and when the doctor came out of the dark room with the new X-ray he said, “What have you done to this boy?’” The nurse said, “What do you mean doctor?” His answering retort was “Don’t be coy with me, you’re a registered nurse and this boy’s arm is completely healed and the bone has knit together without a hair-line crack—it is perfect in five days—what did you use?” She told him, “comfrey,” and he told her if all patients were that smart all he would need to do was to diagnose a health problem and, as patients, they would go back to the old herb doctors of pioneer times and get their prescriptions and heal themselves.” 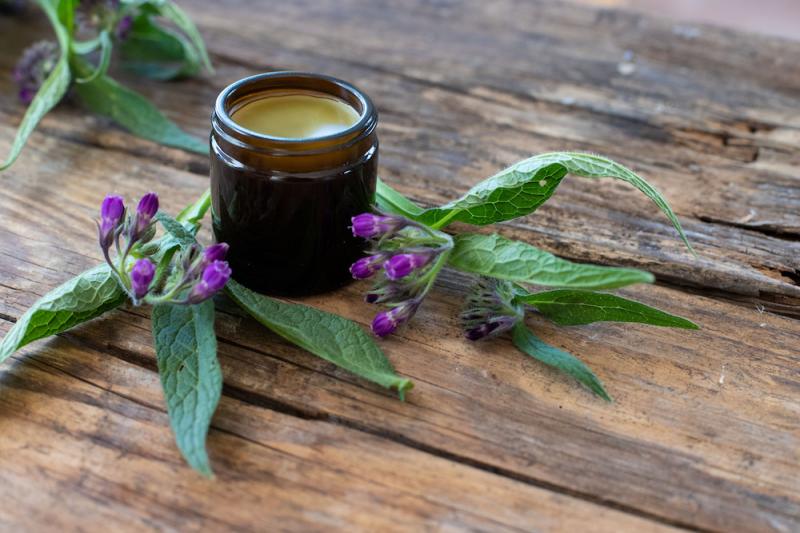 If you want to get the healing properties of comfrey, you’re perfectly safe using it topically. I make a wonderful healing salve using comfrey, plantain, and calendula, the recipe for which you can find in Modern Herbal Dispensatory. I also think comfrey is one of the best herbs for poultices. The crushed fresh root or leaves are excellent for poultices. You can also use the dried, powdered leaf or root.

Comfrey is easy to grow. In fact, it grows like a weed. Once you plant it, you’ll have a hard time getting rid of it. It has very deep roots (four to six feet) and the entire plant can regrow from one piece of the root. If you add the leaves to a compost pile or till them into the ground they make an excellent green manure to make the soil more fertile.;

Back to the Safety Issue

I also believe it’s safe to use comfrey internally. Many foods people eat every day have a higher potentiality for toxicity than comfrey. There are compounds in almost everything we consume, which if isolated and used in excess can cause harm. The reports of comfrey toxicity primarily involved people who had pre-existing liver problems, were on hepatotoxic drugs, or who used extraordinarily large amounts of the herb over extended periods of time.;

The safest way to use comfrey is to use the dried leaves to make a tea. The alkaloids are not very water-soluble, so an infusion of the dried leaf contains only traces of PAs, not enough to be of any concern. I’m sad that I can’t openly recommend that clients take comfrey internally. Doing so creates potential liability. If someone did have a liver problem or developed cancer after taking comfrey, I could be blamed, even if the person were doing other things (such as drinking heavily or taking drugs like Tylenol, which is known to cause liver damage).;

If I Could Recommend Comfrey Internally... 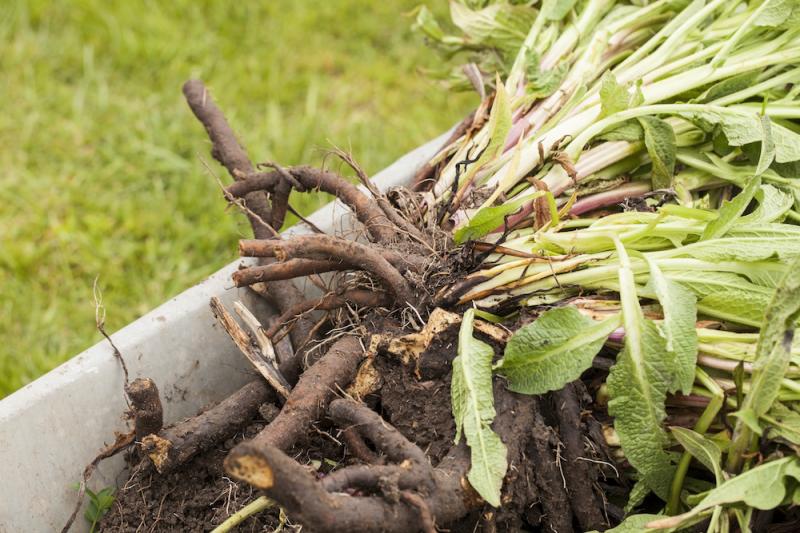 Nevertheless, if I could recommend comfrey for internal use here are the things I would recommend it for. I’m not suggesting you should use comfrey internally for any of these purposes, just saying that I would. If you chose to do so, it’s your choice and you need to be responsible for that choice.

First, I would recommend comfrey tea when people have injuries like broken bones, sprains, torn ligaments, and other injuries. I’d also recommend it for osteoarthritis to assist the healing of the actual joint. In all these cases, it would speed tissue repair. I would limit the time taking it to only four to six weeks, which I don’t believe is long enough to cause any negative effects.

The second use I’d make of comfrey, if I could, would be as part of formulas to aid healing the lungs in conditions like COPD. Comfrey leaf tea would act as a soothing, moistening expectorant, while healing lung tissue damaged by smoking or other irritants. I would combine it with other moistening expectorants and lung tonics herbs like marshmallow, licorice, astragalus, cordyceps, and slippery elm for this purpose.

Third, I would use comfrey tea internally to help heal intestinal inflammation and leaky gut. Again, I would probably combine it with other herbs, such as cat’s claw, black walnut, and kudzu.

In all of these cases, I would not use comfrey if the person were taking medications with potentially damaging effects on the liver, or if they were a heavy drinker, or if they had a history of liver diseases. I would also avoid using it during pregnancy, even though we did recommend it during pregnancy for many years, but that would be because I would be erring on the side of caution, and not because I actually think it would be harmful.

If you’d like to read more about the controversy surrounding comfrey, I found a good article at farmhomestead.com. The article also contains a link to a video about comfrey, which I’ve embedded below. Watch it to see what some very famous herbalists have to say about this plant.