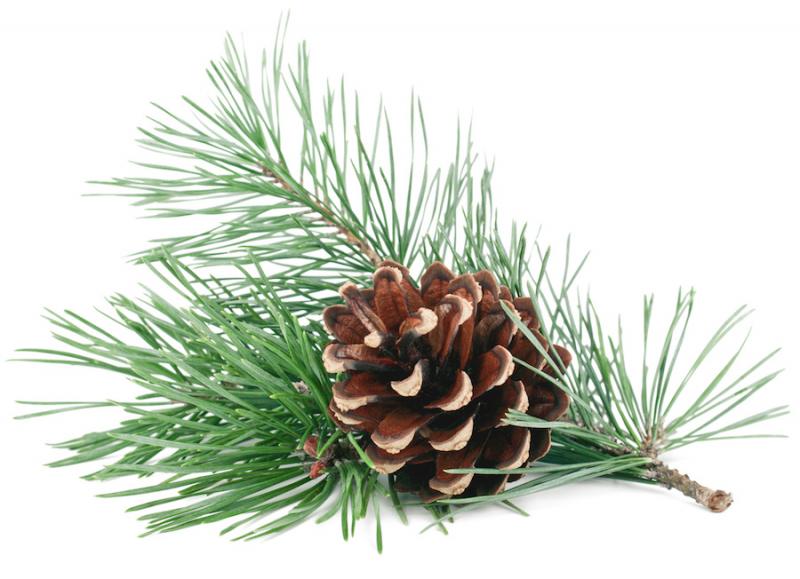 The sense of smell triggers memories like no other sense can because the nerves that detect odors are directly connected to the limbic system, which is involved in memory storage and acquisition. For me, the smells that most strongly trigger the memories of Christmas are pine and cinnamon. So, I’ve decided to write about the many uses for pine trees this week.

Pine trees are most easily distinguished from other evergreens because their needles grow in bundles with a small brown or tan bract at the base. Depending on the species there will be 2-5 needles in each bundle. Like other evergreens, pines have male and female cones. The male cones are small and fall from the tree after pollination, which occurs in the spring. The larger female cones are woody and often used for Christmas decorations.

Pine trees are a major outdoor survival store, especially in winter. Various parts can be used for food, medicine and utilitarian purposes. So, with that understanding let’s look at the many uses for pine. 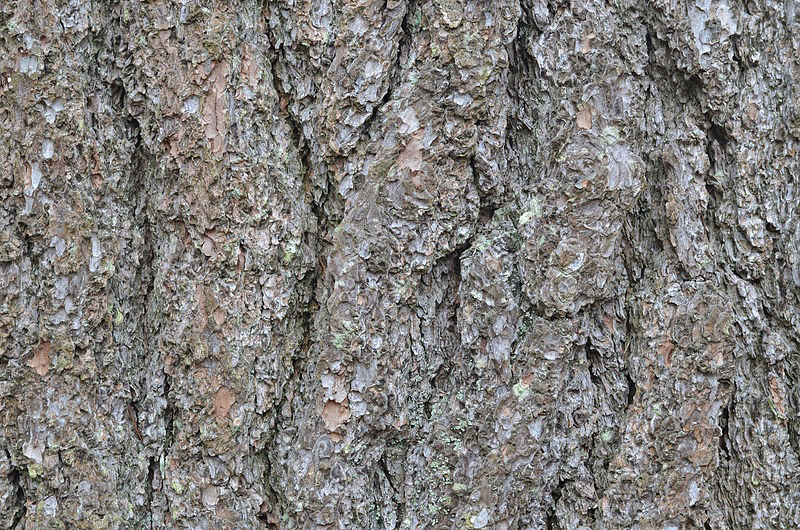 The inner bark of pine trees makes a wonderful cough remedy. In the past I've used  white pine bark to make herbal composition powder and cough syrups, but it’s become harder to find in the commercial marketplace. If you gather pine bark for yourself, you can get it from any species of pine, but remember it’s the inner, not the outer bark that you need. The bark is best collected in the early spring when the sap is running.

You can make a syrup from it using equal parts of water and honey or water and vegetable glycerin. Simmer the bark in the liquid for about 30 minutes, then strain it. I usually use other herbs with it, but it’s a great remedy by itself.

It helps to pull mucus from deep within the lungs, being especially helpful where there is infection making the mucus thick and green. It can also be used in the beginning stages of a cold or flu to help the body flush out the disease before it can get deeper into the system.

Extracts from pine bark contain oligomeric proanthocyanins, which are related to tannins. Similar compounds are found in green tea and cocoa, these compounds are antioxidants, which are thought to be beneficial for preventing free radical damage to tissues. They also appear to reduce inflammation, enhance blood flow, improve venous circulation and reduce swelling in the legs.

If you don’t want to use the bark, you can make a good cough remedy from the young pine shoots at the end of the branches. Harvest them, chop them up and extract them for syrup or cough drops. The buds or shoots are used in my favorite pine cough drops made by A. Vogel. Here’s a link to making a syrup from them yourself: http://www.flaminglicious.com/young-shoots-of-pine-syrup/. 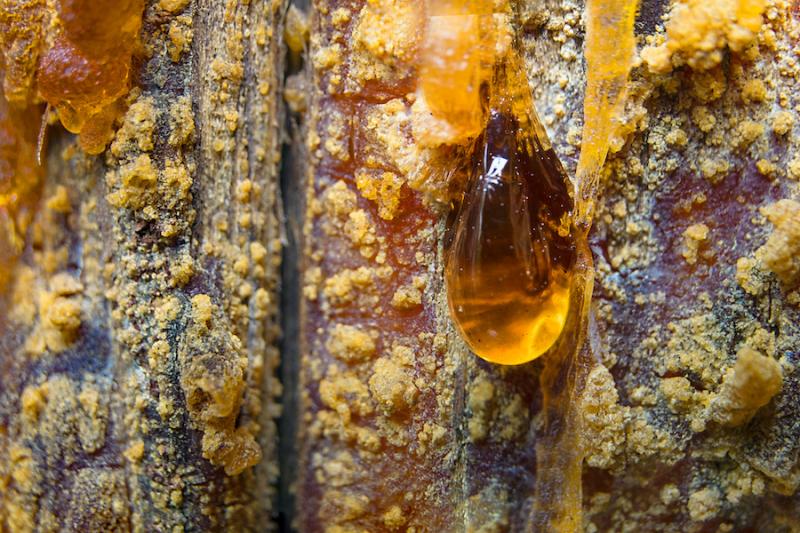 Pine gum or resin is an even more powerful decongestant, expectorant, and disinfectant than the bark. It’s very sticky and is not water-soluble, so if it gets on your hands or clothes it won’t wash off. You have to add some oil or alcohol to dissolve it.

The straight resin can be applied to pull out pus or slivers but If you heat it in fixed vegetable oil and strain the gunk out of it, you can make a nice salve for the same purpose. Recipes, like this one, are available If you want to try making the salve for yourself.

The gum has been used to make glue or waterproofing and also makes a great fire starter. The distilled resin creates turpentine, which is used as a solvent and was also used to make paint. 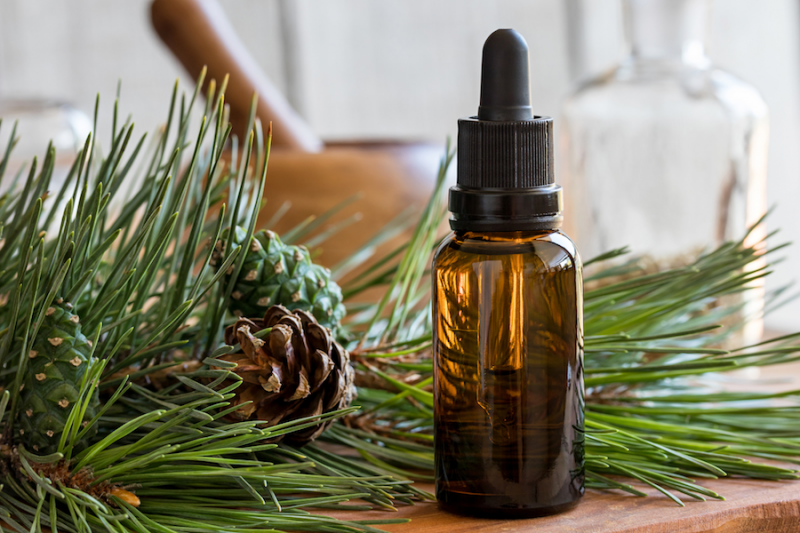 Pine contains an essential oil that acts as a decongestant and expectorant to help recover from respiratory and sinus infections. Having a tendency to respiratory problems I sometimes use it in a diffuser by my bed (often in combination with eucalyptus) to help clear my sinuses and lungs.

When congested, you can heat a pan of water to boiling, remove it from the stove and drop some of the oils into the hot water. Cover your head with a towel and place your face over the steam to breathe in the vapors. This helps the body fight the infection, as well as loosening trapped mucus.

The disinfectant nature of pine oil is partly why pine-scented cleaners are popular. Pine makes things feel fresh. It is an uplifting and invigorating fragrance, which is why walking in a pine forest can feel so good.

Vitamin C is scarce in wintertime, but pine needles have plenty of it. So, a tea made from pine needles has been used as a natural vitamin C supplement in the winter. You can make a pine needle tea by finely chopping the needles and steeping, not boiling, them in hot water. The tea can help to ward off wintertime colds and flu, since pine is a natural decongestant and disinfectant. You can also use the needles to make a cough syrup, but it's not as strong as one made from the bark or shoots. Natives also used the needles to weave baskets and boughs of pine needles make good insulation for a winter survival shelter. 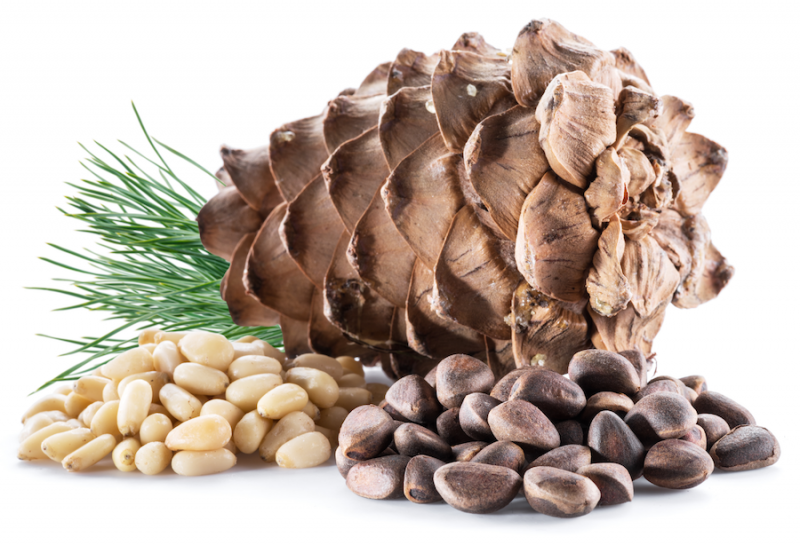 The seeds found in the female pine cones are often sold in the fall. Although they're sold as nuts, botanically they are seeds. Pine nuts are one of the most nutritious of all seeds, containing about 30% protein, the highest of all nuts and seeds. They also contain significant amounts of the fat-soluble vitamins A, D and E, as well as thiamine. In addition they contain the minerals phosphorus and potassium in significant quantities, along with lecithin and a high amount of monounsaturated fats like those found in olive oil. They're great for making pesto, a wonderful and nutritious pasta sauce.

The pollen from pine trees is edible, nutritious and quite tasty. It contains protein, good fats and vitamins and minerals like vitamin E, B-complex, calcium, and magnesium. Not only that, it actually contains a small amount of testosterone and is used as a testosterone booster in men.

It can be used as a flour extender. To collect the pollen, in the spring when the male cones are blooming put a plastic bag over the end of a branch and tap on it to release the pollen. It can then be mixed with equal parts flour to make pancakes, waffles or bread. I made waffles with it once; they were delicious. 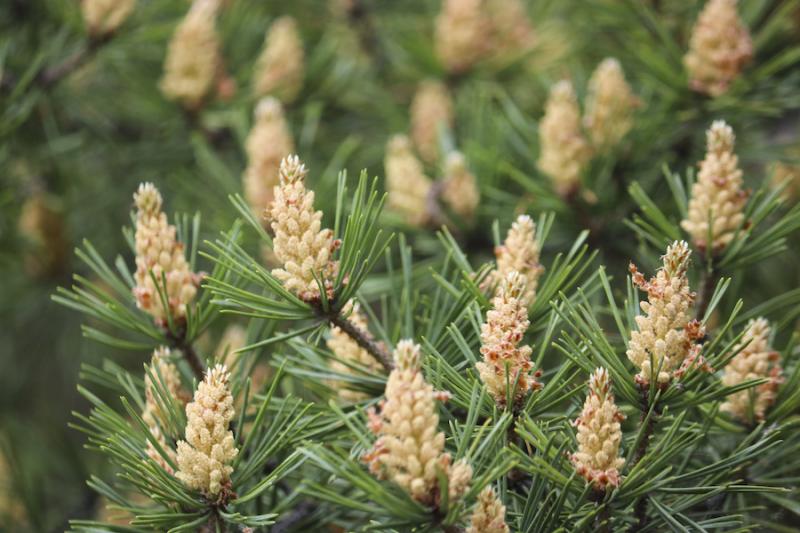 Edward Bach created a flower remedy by making a decoction of the young cones. Pine flower essence is used to help people who suffer from undeserved feelings of guilt and shame. People who need pine flower essence are highly critical of themselves and have difficulty accepting themselves. They often learned to internalize the blame for dysfunctional family dynamics and experience regret and remorse far beyond what the situation calls for.

Pine FE helps a person to forgive themselves, accept themselves, and not accept undeserved blame. It helps them move past wallowing in the sins and errors of the past and find salvation and grace to move forward into the future.

In summary, pine is a great remedy to ward off wintertime illness. It can help you get things off your chest, physically and emotionally, so you can breathe freely. It can also provide nourishment and help you light a fire to warm you against the cold. All this makes the pine tree a wonderful symbol of the season where we celebrate the birth of hope, grace and light into the world.