Nopal cactus is useful for medicine, food, cooking, and even water purification | August 24, 2021 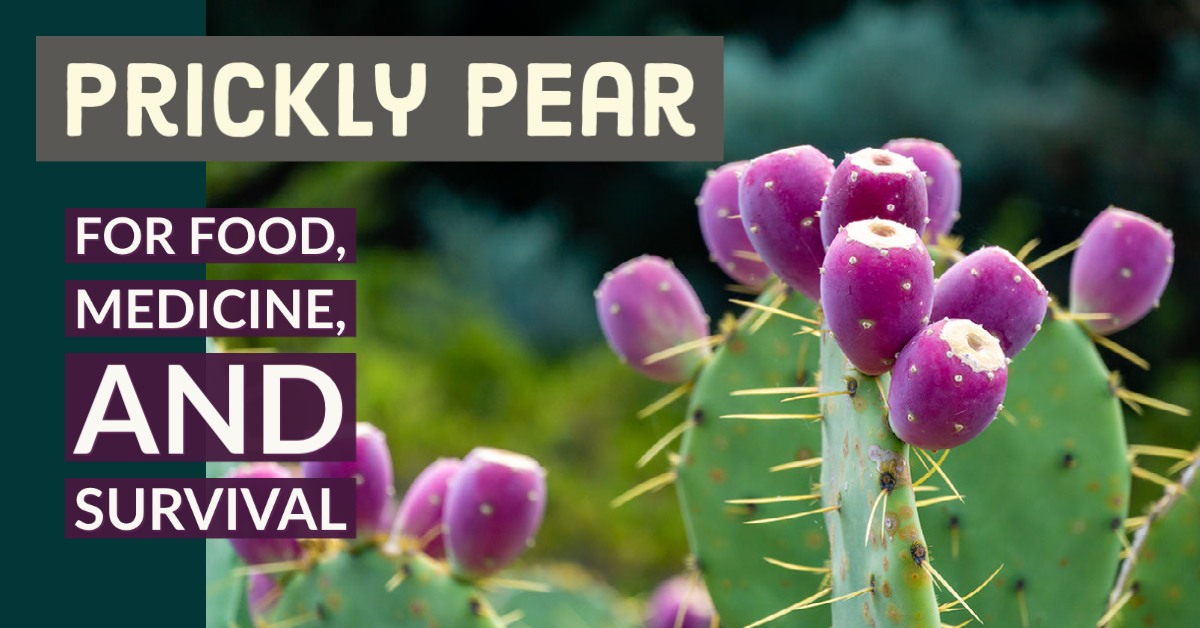 Knowing how to use the edible and medicinal plants growing in your area will give you a greater sense of security and valuable skills when troubled times come. One of my goals in writing these articles is to introduce you to the uses of common plants you might find growing nearby so you can learn and share this practical knowledge. Today I’m going to discuss the uses of nopal, also known as the prickly pear cactus.

While more common in the Southwest, various species of prickly pear are found throughout North America, from British Columbia to the Appalachian Mountains. Although various species have been used interchangeably, the two species most commonly used for herbal medicine are Opuntia ficus-indica and O. streptacantha. This is an incredibly useful plant for food and medicine that also has utilitarian uses in survival situations. 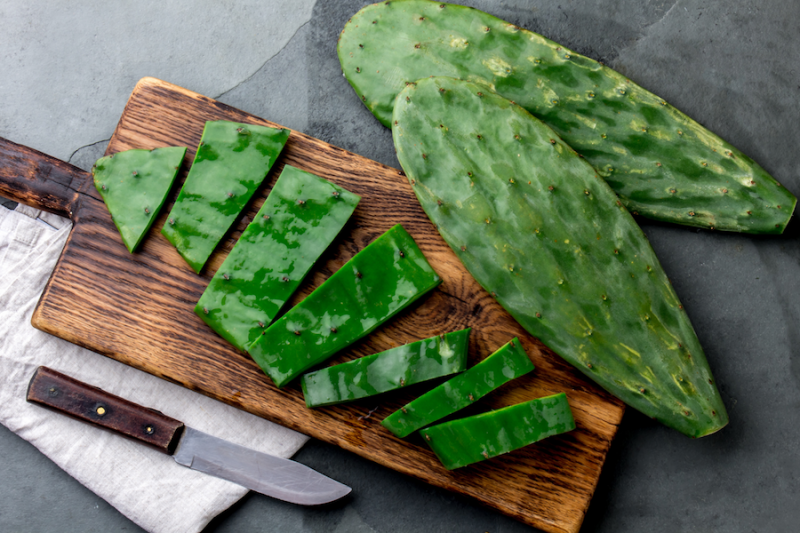 The cactus paddles, which are actually very wide fleshy stems, were a staple food of Southwestern tribes and are still used in Mexican cuisine. Known as nopalitos, you can find them for sale in many Mexican grocery stores and sometimes even in generic grocery stores. I've even had a dish with nopalitos at a Mexican restaurant, although I haven't found them on the menu that often.

The pads are a little bland, but not unpleasant to eat, as long as you remove all the cactus needles first. If you don’t, eating them will be a literal pain.

Once the needles are removed, however, they can be eaten raw, cooked into soups and other dishes, fried, boiled, roasted, or grilled. They can also be pickled.

Nopalitos are not a great source of calories. One cup supplies about 14 calories. They are very high in water soluble fiber, however, and are a good source of vitamin A and betacarotene. The fresh pads are also a good source of vitamin C. They have a very low glycemic index (5, the same glycemic index for xylitol), which means eating them won’t raise your blood sugar, which would make them a helpful food for weight loss. 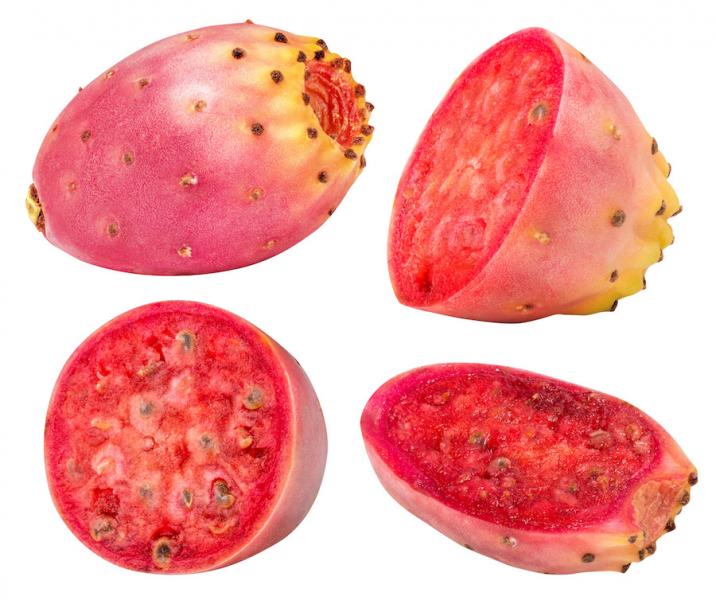 The fruits of nopal, the prickly pears, are also edible and have more caloric value. They’re the tastiest part of the plant, too. You can also find them in Mexican grocery stores and even some regular grocery stores (mostly in the Southwest). Like the stems, they’re covered with needles that have to be removed before you can eat them. If you are harvesting them yourself, the easiest way to remove the needles is to burn them off. Skewer the fruits and hold them over a flame until all the little clumps of needles are burned black.

After removing the needles, peel the fruits. The flesh is filled with seeds, which won’t hurt you if you swallow them, but it’s more pleasant to remove the seeds and turn the pulp into juice. You can blend up the fresh fruits and strain out the juice or you can do what I did when I made prickly pear jelly; cook them in a little water, mash them up and strain out the juice. The juice can be made into jelly or syrup, or it can be turned into a beverage.

Nopal as a Medicine 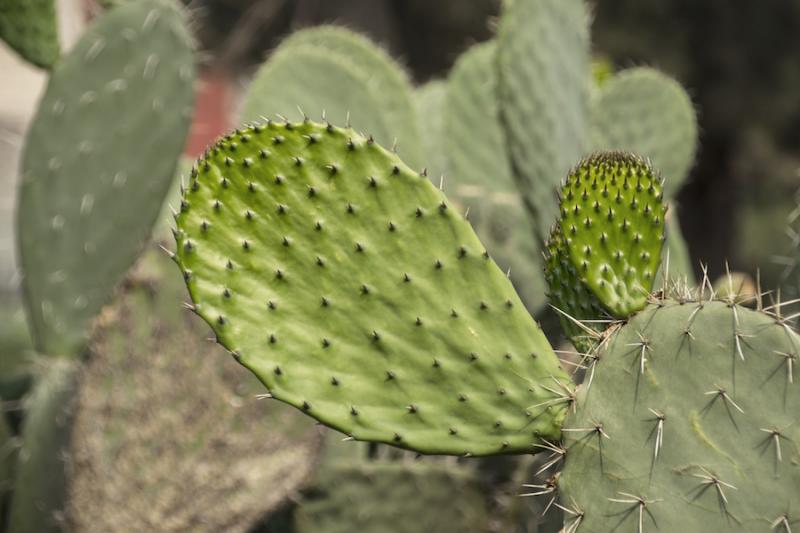 Several studies suggest nopal stems can help lower blood sugar, making them helpful for people with diabetes or metabolic syndrome. I included nopal in a cinnamon-based blood sugar reducer I helped formulate for a major herb company. Many people have reported great results from that formula. The soothing, mucilaginous nature of nopal helps balance the warming and drying, pungent and astringent, nature of cinnamon.

The gel-like material in both cactus and aloe vera serves the same function. It stores water during the rainy season for use during the hot summer months when there is little or no rain. The mucopolysaccharides (water-soluble fiber) in these plants are also a storehouse of food. We can’t digest this fiber, but the friendly bacteria in our intestines can, which make the juice of both plants useful in healing the intestinal tract when it is irritated or inflamed.

To protect this store of nutrients and water, there are also antimicrobial compounds in the gel. When applied topically, the gel soothes burns and other skin irritations, helps wounds heal faster, and also acts to prevent infection. Taken internally, it can help to promote a better intestinal microbiome by reducing populations of unfriendly bacteria while feeding good bacteria.

Cactus as an Emotional Remedy 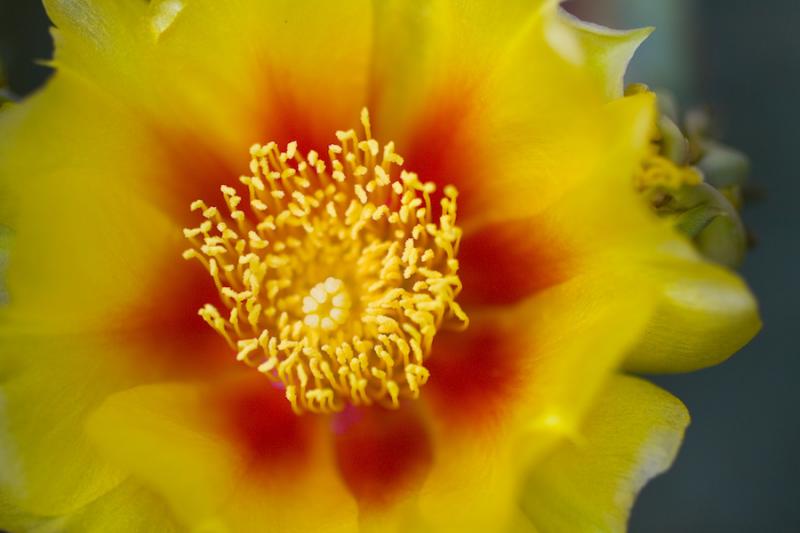 Although I'm not aware of any cactus flower essence, I think cactus has some interesting signatures that suggest it may also have benefits in emotional healing. Cactus has this soft, juicy flesh, which is a yin (feminine) energy. They typically grow in a hot, dry, yang (masculine) climate, where water is premium. The needles discourage animals from eating it for its water content, which means it has the ability to protect itself in a harsh environment.

To me, this suggests that cactus may be a useful remedy for soft-hearted people who are kind and giving but find themselves in the midst of adversity and people who seek to take advantage of them. Cactus teaches that one can have a kind-hearted nature, but that one can also defend themselves against those who would prey on that nature without allowing life to harden them. It’s the lesson suggested by Jesus when he said we should be as wise as a serpent, but as harmless as a dove.

Now we come to the tricky part of using nopal, which is getting rid of the nettles. Michael Moore says you can fillet them off with a sharp knife. I don’t recommend this method. I tried it once on an herb walk and some of the really tiny hair-like nettles known as glochids got stuck to my knife. When I cut out a piece of the gel and put it in my mouth, they got stuck in my tongue. Ouch! Fortunately, I had a pair of fine tweezers in my first aid kit and one of the students pulled them out.

When attending a survival course at Sam Coffman’s school, The Human Path, I learned a better way to remove the needles. Put the pads on a rock and rub the needles off with another rock. You can then rinse the pads and they’re ready to cut into and use. You could also put them onto coals and burn off the needles as you do with the prickly pears. 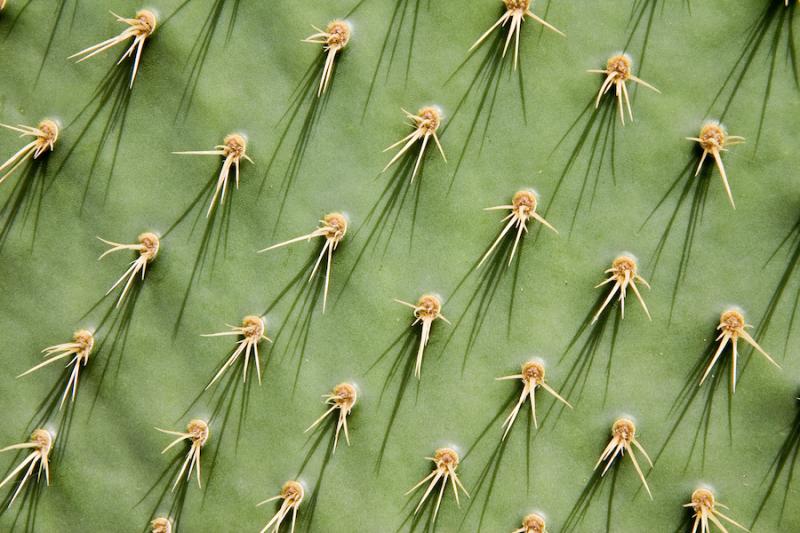 Nopal is a great survival plant. It’s not only useful for emergency food, but it’s also a source of water in an emergency. You can chew up the gel to extract the liquid in a survival situation.

The pads can be used as a survival container for cooking. Once the needles have been removed, the top end of the pad can be cut open and the inside opened to form a vessel, sort of like a piece of pita bread.

The gel can also help purify water in emergencies. The gel attracts particulate matter which can help to clear up cloudy water according to an article at sciencenews.org. So, here’s an emergency way to clear up cloudy (muddy) water and make it safer to drink. Get a clear plastic or glass container. Put some chopped-up cactus gel in the bottom and pour the water into the container. Leave it in the sun for three to four hours. The gel will attract much of the particulate matter in the water causing the water on the top of the container to become clearer. It will also reduce bacterial counts with its antimicrobial action. The UV light from the sun will kill most of the rest of the bacteria. You can then drink the water off the top.

If you really want to learn how to use herbs like nopal, don’t just read about them. Cut one of the pads and remove the needles. Then try eating it or applying it to a burn or wound. The more you practice using plants, the more practical knowledge and skill you acquire. That way, you’re better prepared should troubled times arise.