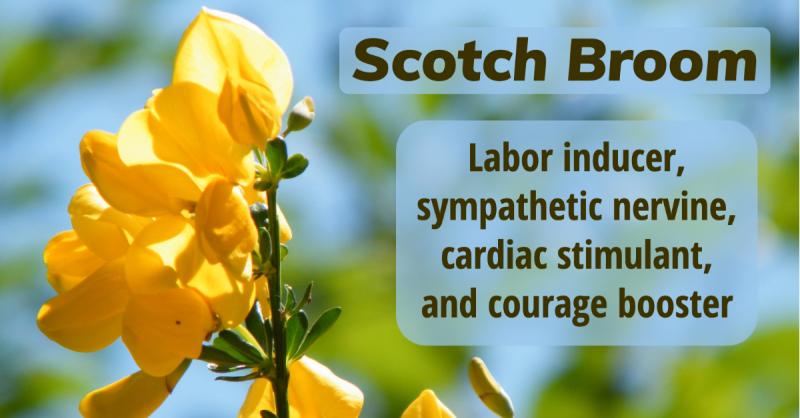 I first learned about Scotch broom from medical herbalist Chanchal Cabrera, who also introduced me to the use of toxic botanicals like lily of the valley and belladonna. She shared a formula with me for inducing labor that contains the herb. I’ve used it successfully a couple of times to help induce labor after the due date has passed. The formula contains:

The Scotch broom and blue cohosh have oxytocic effects and oxytocin is the hormone that induces labor. Pitocin, a drug that mimics oxytocin, is used in medicine to induce labor. The motherwort and lobelia counteract the negative effects of Scotch broom, which tends to elevate heart rate and blood pressure. The dose is 30-60 drops four to five times a day.

Scotch Broom and the Nerves 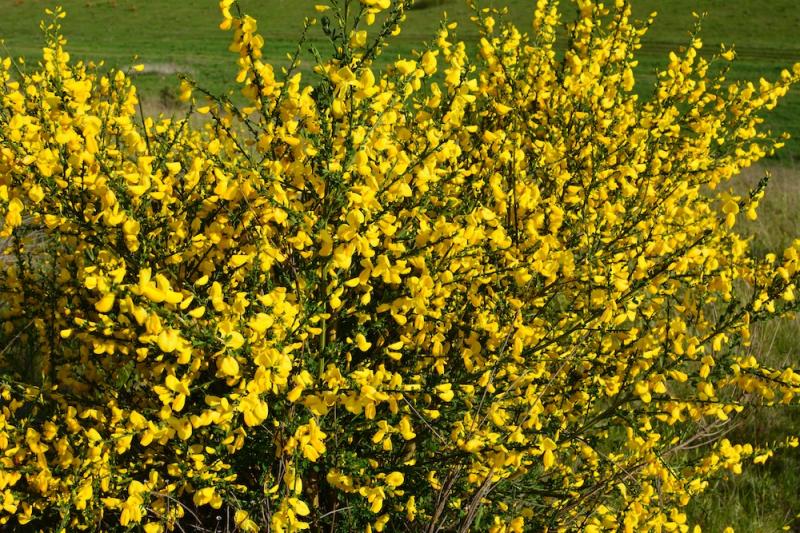 In fact, Scotch broom was one of the herbs that helped me discover the fact that some people are parasympathetic dominant. Here’s the story.

I was working with two friends of mine many years ago, who developed two colloidal mineral supplements that also contained essential oils. One formula, Aromin Nite, contained essential oils that helped to activate the parasympathetic nervous system to aid in sleep and rest. The other formula, Aromin Day, contained essential oils that stimulated the sympathetic nervous system and acted as a morning pick-me-up, increasing energy. I really liked both, but we ran into a small problem with the concept. About 10% of the people who tried the formulas reacted in the opposite way. That is, the Aromin Nite formula energized them and the Aromin Day formula relaxed them. Their reactions were the opposite of the intended effects.

Later, when I ran a liquid herb company that produced glycerites, we discovered that the stimulant herb Chinese ephedra could be used for ADHD. It contains ephedrine, a chemical that mimics epinephrine (a sympathetic neurotransmitter). The father who first reported this to us said that he figured that since Ritalin was a stimulant, he’d use ephedra instead, and it worked. We began promoting this idea and it worked quite consistently. 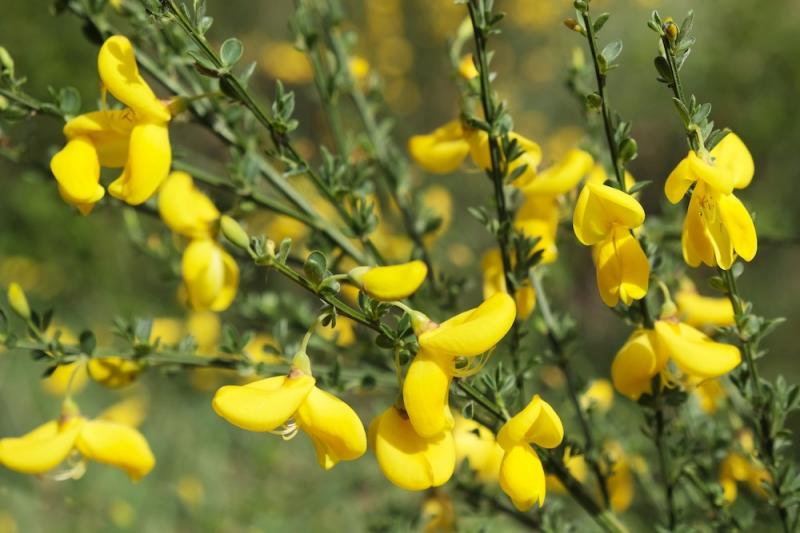 I was never comfortable with the idea that herbs reacted differently with different people, and I solved the puzzle when a friend who suffered from adult ADHD and used ephedra couldn’t get it anymore. I knew that she had lost one of her adrenal glands when a kidney had been removed and a hypothesis formed in my mind. What if she was low in epinephrine (also known as adrenaline) and taking something that boosted this sympathetic neurotransmitter brought her nervous system into balance, thus allowing her to relax.

I did a little research and found two herbs with strong sympathetic nervous system stimulating properties, Scotch broom and lily of the valley. I blended these with some ephedra I had and sent the formula to her, cautioning her to start with just a few drops. The blend helped her go to sleep and from there we proceeded to develop a greater understanding of sympathetic versus parasympathetic dominance in the nervous system. You can read more about this in the article Balancing the Nervous System.

Scotch Broom and the Heart

A third use I found for Scotch broom is to stimulate the heart. Since the sympathetic nervous system helps regulate the heart rate, increasing it and strengthening it, this remedy taken in excess can cause tachycardia (rapid heartbeat). However, if the heart is feeble or the pulse is low, Scotch broom will invigorate the circulation.

It is reported to act on the electrical conductivity of the heart, slowing and regulating the transmission of nerve pulses.  This makes it useful for atrial and ventricular fibrillation, arrhythmias (irregular heartbeat) and extra-systoles, and post-infectious myocarditis (inflammation of the middle walls of the heart muscle) with arrhythmia. I’ve never used Scotch broom by itself for these problems, but always as part of a formula using other herbs like hawthorn, lily of the valley, and other herbs for the heart and circulation. 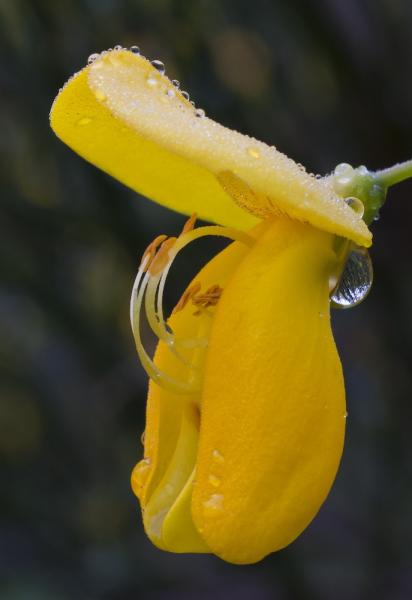 Scotch broom is one of the flower essences from FES services. Its indications as a flower remedy also suggest the emotional pattern that might signal its value as a remedy for the heart. It is a remedy that’s indicated when a person is weighed down and discouraged. Their heart is full of pessimism and despair. They feel so burdened that they don’t even feel like trying anymore. Their attitude is “What’s the use?”

The flower remedy helps promote more positive and optimistic feelings about the world and future events. It helps a person find courage and strength to move beyond their worries and concerns to be of help to others. It helps them sense purpose in their life, care for those around them, and find encouragement, that is, the courage to carry on in face of the obstacles and problems they face.

Scotch broom is considered a weed in much of the Pacific Northwest, so it exhibits this tenacity. It helps people who are burdened by an apocalyptic view of the future (e.g. global warming, inflation, end times) to find and cling to hope and faith in spite of their concerns.

The herb has a mild potential for toxicity. Too much causes anxiety and rapid heartbeat. Since it is oxytocic, it should also be avoided during pregnancy. Because of Scotch broom's strong action I prefer to use it in formulas that help to balance it out. However, there is no concern with using it as a flower remedy and given its emotional indications, there are probably a lot of people out there who could use this remedy.