Twenty-four hours a day, seven days a week, and 365 days a year your nervous system is active, managing all of the processes of your body. It regulates your breathing, heart rate, blood pressure, digestion, elimination, and cycles of rest and activity.

Your central nervous system (CNS), is busy carrying information from your senses to your brain. This allows you to observe, listen and interact with your external environment. As you process this information in your brain and make decisions, the CNS allows you to act on these decisions by sending signals to your muscles so you can move and act. It is the part of your nervous system over which you have conscious control.

At the same time, another part of your nervous system, the autonomic nervous system (ANS), is regulating all the essential functions you never have to think about. It’s sensing the internal environment of your body and adjusting your breathing, heart rate, blood pressure, hormones, digestion and other processes that happen without your conscious control.

There are two branches of the ANS, the sympathetic (SNS) and parasympathetic (PNS) nervous system. Generally speaking, the SNS, is designed to “wind you up” while the PNS is designed to “wind you down.” There is always a dynamic balance between these two systems, sort of like balancing on a seesaw (see illustration below). You feel your best when these two branches are held in a dynamic balance. If you go out of balance too far in either direction, you’ll get too “wound up” or too “wound down” and experience nervous system problems like anxiety or depression. Understanding both branches of your autonomic nervous system and how to balance them is essential to feeling good. 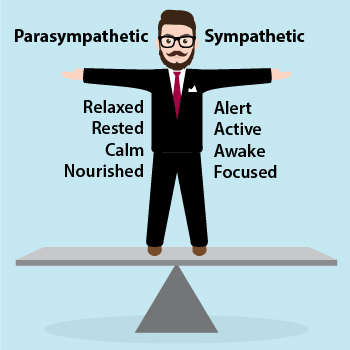 When something frightens you to the point you “jump” you’re experiencing what happens when the nervous system seesaw tips in the direction of the sympathetic nerves. This system primes you to take action in the face of a challenge.

Your SNS primes you to take action by increasing heart rate and blood pressure, moving blood away from the digestive system and into the muscles, dilating your bronchioles to take in more oxygen, and otherwise giving you the ability to move. It also makes you more focused, helping you to concentrate on the task at hand and stick with it until the problem is resolved.

All this “winding up” action occurs under the stimulating effect of epinephrine and norepinephrine, which act as both hormones and neurotransmitters. Because these substances are released when something scares you, people often refer to them as stress hormones. However, it’s more accurate to think of them as action hormones. They’re not designed to make you stressed, they’re designed to help you stay alert, awake, and focused, as well as take appropriate actions to meet the challenges of life.

What is commonly known as stress, should really be called distress. Distress occurs when there is too much sympathetic activity coupled with too little parasympathetic activity. When you’re distressed you feel nervous, anxious, and overwhelmed which can eventually lead to fatigue and exhaustion.

When it is balanced stress can take on a positive character. This has been called eustress. As shown in the graph below eustress helps you achieve peak performance. If the balance of your nervous system shifts too far in either direction, towards the sympathetic or the parasympathetic side, your nervous system becomes imbalanced and your capacity to take on life’s challenges suffers. 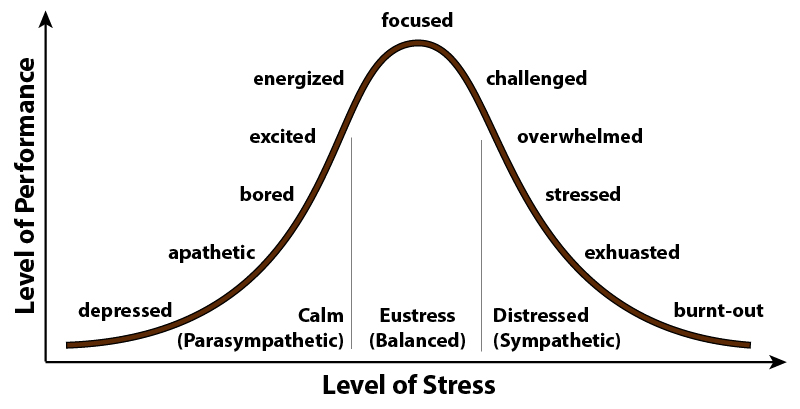 During your daily cycle, the SNS is most active in the morning and midday. In the evening the balance shifts towards the PNS, so you can unwind and eventually sleep. The PNS peaks at night because it’s the part of your nervous system that allows you to rest and perform necessary repairs and maintenance to body systems. The PNS also activates digestive secretions so you can break down and assimilate your food. It also lowers blood pressure, and heart rate, and is even involved in sexual arousal.

For anyone who is overwhelmed by distress, PNS activity sounds great because they need more rest and relaxation, but if the balance shifts towards too much PNS activity and too little SNS activity you still won’t feel good. A person with too much PNS activity may be easily excited, but not be able to focus and turn that excitement into constructive activity. Excessive PNS activity can also make a person overly sensitive to noises, smells, touch, and other sensory inputs, which means they are easily distracted and unable to focus or concentrate. This may make them flighty, inattentive, and overly sensitive. As the graph above suggests, high PNS activity can leave you feeling bored, apathetic, and depressed. 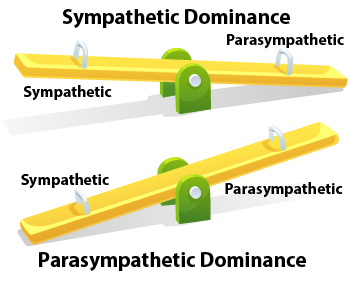 Once you’ve determined which direction the nervous system is out of balance, here are some ways you can restore balance. 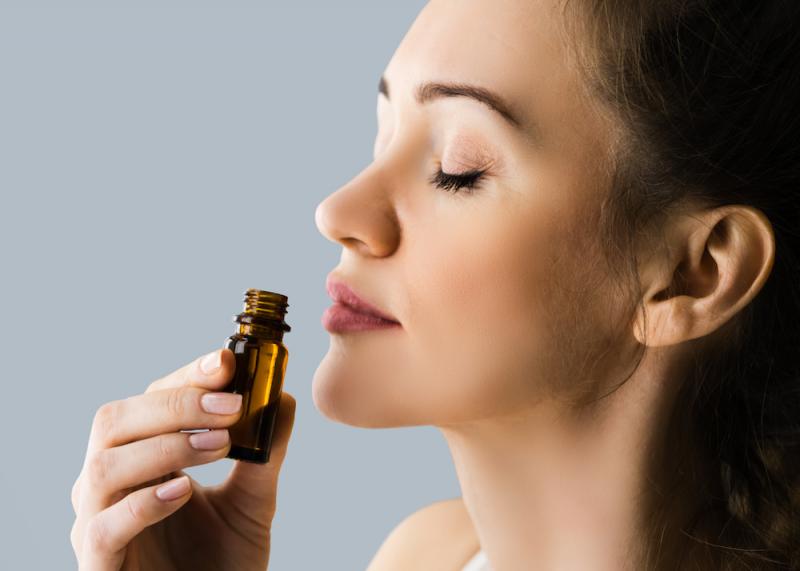 Smell has a very direct and immediate impact on the nervous system, making aromatherapy a quick tool for observing changes in nervous system balance. All you have to do is look at the size of a person’s pupils (as explained above) and have them smell an essential oil. Many oils will cause immediate changes in the size of the pupils.

Generally speaking, the more floral oils, like chamomile, lavender, and ylang ylang tip the nervous system towards the parasympathetic side, calming down the sympathetic nerves. This is why they aid relaxation and sleep. However, a person who already has small pupils (parasympathetic dominance) will become more nervous and anxious smelling them.

In contrast, oils with a more pungent or citrus fragrance will usually increase sympathetic responses and calm down parasympathetic nerves. These oils include lemon, pine, and rosemary. These oils energize someone feeling sluggish or tired, and aid mental focus and concentration. However, if you’re already sympathetic dominant, these oils can also make you feel more tense and anxious.

Essential oils traditionally used in meditation, like frankincense and myrrh, have a more balancing effect on the nerves. Experiment a little to discover which oils bring your nervous system into a more balanced and harmonious state.

People who have a sympathetic dominant nervous system are often stuck in fight or flight mode. They are pushing themselves too hard without time for adequate sleep or recreation. They are often tired, but may not sleep long enough or well enough. As a result, they often try to use stimulants like sugar and caffeine to increase their energy. These substances only push their nervous system farther out of balance.

Sympathetic dominant people should take more time for R&R and make sure they get a good night’s sleep. They should also eat more vegetables and non-sugary fruits to help alkalize their body as the SNS pushes the body to be more acidic.

Most of the herbs traditionally known as nervines help to correct sympathetic dominance. These nervines calm down the SNS and help to activate the PNS. These nervines are typically either relaxing, sedative, or antispasmodic in nature and include valerian, passion flower, chamomile, hops, kava kava, lobelia, and blue vervain. The formulas that contain these types of herbs we refer to as Relaxing Nervine formulas.

Here’s an interesting question to ponder. Why do drugs like Ritalin help certain hyperactive and inattentive children to perform better in school? After all, Ritalin is an amphetamine, which means it stimulates sympathetic nerves in the same way as other “uppers” like cocaine.

Herbs that increase sympathetic nervous system activity are remedies people have traditionally used to help them stay alert and focused. The strongest of these are Chinese ephedra and Scotch broom. They also include caffeine-bearing plants (such as coffee, kola nuts, guarana, and green or black tea), stimulating adaptogens (like Eleuthero root and schizandra) as well as herbs like rosemary, thyme, bee pollen, and licorice root. Herbs high in iodine (like kelp and dulse) may also be helpful.

The PNS system makes the body’s pH more alkaline, so a PNS dominant person actually benefits from a diet higher in red meat and fat. Red meat contains large quantities of the amino acid tyrosine, which acts as a precursor to the sympathetic neurotransmitters. Eating red meat (steak, for instance) for breakfast actually helps stabilize PNS-dominant people’s moods and energy.

I hope this information helps you balance your own nervous system and help others to do the same.