Decongest the Circulation and the Mind 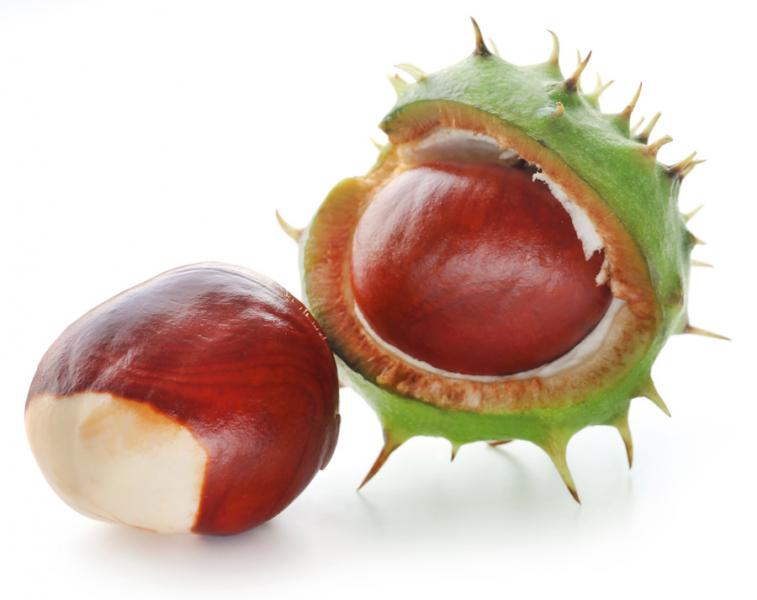 When I was a boy, I loved to gather horse chestnuts in the fall. I loved the feel of them and would put them in my pockets. I didn’t know any use for them, except to sometimes throw them in the fireplace so they would heat up and explode, but I still loved them. I have a theory about plants, which is that we’re instinctively drawn to plants that are good for us. And there are a couple of reasons I will share with you that I feel I was drawn to collecting the seeds of this common ornamental tree.

Horsechestnut (Aesculus hippocastanum) is also known as Ohio buckeye, due to the brown-colored seed with its cream-colored eye. The seed is inside a prickly green husk, which breaks into three parts. In the spring the tree has white flowers that sometimes have red or yellow colors, too. The seeds that are used in herbal medicine and the flowers are a Bach flower remedy.

The seeds I used to gather aren’t edible, without being highly processed to remove the toxins they contain. Even as a teenager I knew better than to try to eat them. I'm not familiar with the methods, but Native Americans did take the time to process them into something edible.

The seeds contain a complex mixture of saponins (triterpene glycosides) called aescin, which has been well researched as a tonic to the circulatory system. These compounds have an anti-inflammatory action and they increase the tone of veins. They reduce the permeability of the capillary walls which helps with edema, especially in the legs. They also help to stabilize the endothelium, the one cell thick lining of the arteries that produces nitric oxide to regulate blood pressure.

In Europe, they have injectable medicines made from horse chestnut which are used for head trauma. They are also helpful for preventing deep vein thrombosis and reducing swelling after surgery.

All this means that horse chestnut is a great remedy for problems where blood and fluid are congested. They are a popular remedy, both topically and internally for varicose veins and work well with butcher’s broom, another herb that tones the veins. A cream, lotion or extract can also be applied topically to hemorrhoids, bruises and sprains to reduce swelling.

Combined with other circulatory herbs like ginkgo and hawthorn, horse chestnut can help with lymphedema and peripheral vascular disease. It also can reduce swelling, itching, and nighttime cramps in the legs. Matthew Wood says it’s also helpful for congestion of the portal vein, causing the liver to be swollen. His indication for the remedy is a pulse where there is “not enough space or time between the beats.” He says this is an indication of mental tension, with the blood being held back by the pressure.

Horse chestnut is a Bach flower remedy called white chestnut. It’s indicated when a person has an overly chatty mind that goes around and around in circular thinking. The thinking is obsessive, compulsive and worrisome. Conversations and events are reviewed over and over again to the point that thinking becomes oppressive. It’s like the person’s mind can’t take a break. The person is oppressed by their own thoughts and can't seem to get them under control.

As a result of this mental obsession, the person may experience insomnia, headaches, tension and other neurological disorders. Matthew Wood finds these mental and emotional indications are good indications for the use of the herb itself. People who have high blood pressure or abdominal congestion who are prone to this mental state may find relief with this remedy. He even reports one case where a person with glaucoma matched these indications and horse chestnut helped relieve the pressure in the eye. (That doesn’t mean it would work for everyone with glaucoma of course.)

The flower essence helps a person to quiet and clear their mind. One might say it helps a person to mentally relax and find inner stillness. Personally, I’ve always been someone who has a lot going on in my mind and that is why I think I liked to carry horse chestnuts in my pockets as a young boy, they made me feel calmer.

There might be another explanation, too. My midwife friend Joan Patton told me that the horse chestnut seeds act as natural diodes to absorb electromagnetic pollution and perhaps negative energy in general. She would gather bags of them in the fall and put them next to the TV or computer and replace them when they started to shrivel. I have no idea if this actually works, but her intuition was usually correct.

So, if you’re walking down the street or in a park this fall and see some horse chestnuts on the ground, try putting some in your pockets and see how you feel. With the increasing amount of EMFs we’re all exposed to maybe we ought to consider planting more of these beautiful trees.