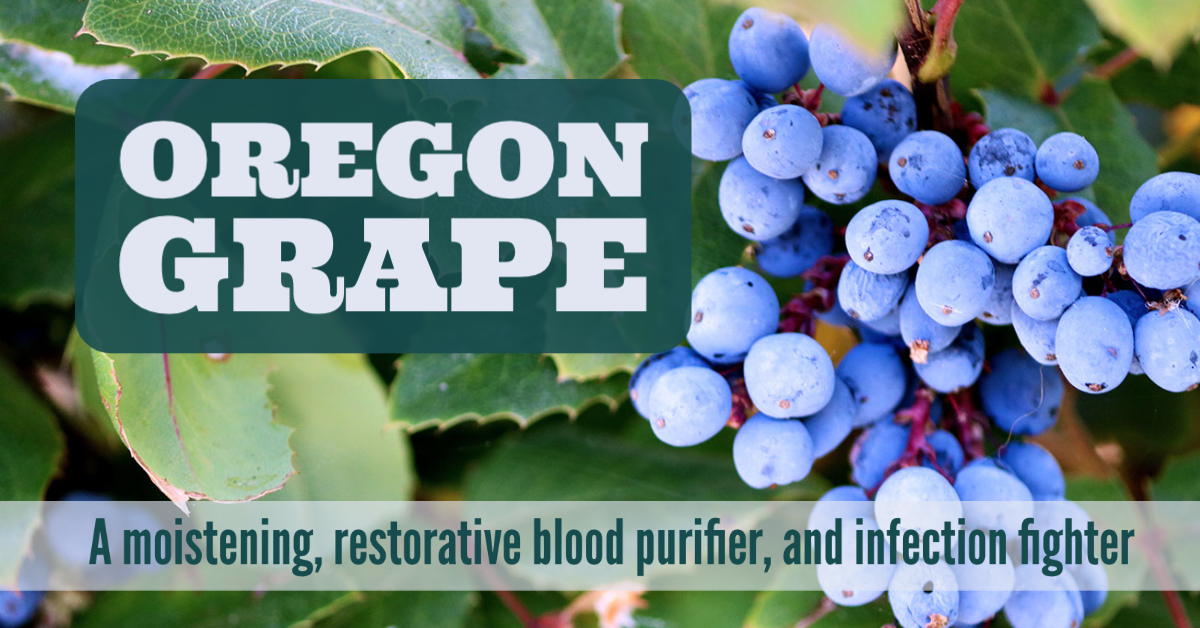 Hiking in the mountains of Utah, I often find the holly-like leaves of Oregon grape. In the spring, bright yellow flowers can be spotted amid the leaves, and in the fall, dark, purplish-blue berries. The berries are edible, but just barely, due to their very sour, almost bitter flavor. Still, I once gathered some and mixed them half and half with regular concord grape juice, which made an excellent grape jelly. The only way I can describe the flavor is that it seemed to have a richer grape taste than just plain concord grape jelly.

The species I find in Utah is Berberis repens, which is a small plant (pictured below), often growing in rocky soil which makes it difficult to harvest the root, which is the medicinal part. The more commonly used species in herbal medicine is B. aquifolium which is a bigger, shrubbier plant. Both are related to barberry (B. vulgaris) and all three plants contain the alkaloid berberine, which is also found in goldenseal and other plants.

In general, plants that contain berberine have been historically used to treat infections, both bacterial and fungal. Berberine alters the balance of gut flora, promotes bile flow, and has a gentle laxative action. However, it would be a big mistake to treat all herbs containing berberine the same. Each of these remedies has its own unique effects.

Oregon grape has a gentler action than goldenseal. Goldenseal and barberry are more drying, with goldenseal being mildly astringent as well. Oregon grape is more alterative and moistening. I've also found that Oregon grape is a better remedy for children with bacterial or fungal infections because it is gentler in action. I have used it either alone or combined with echinacea, thyme, and other infection-fighting herbs. 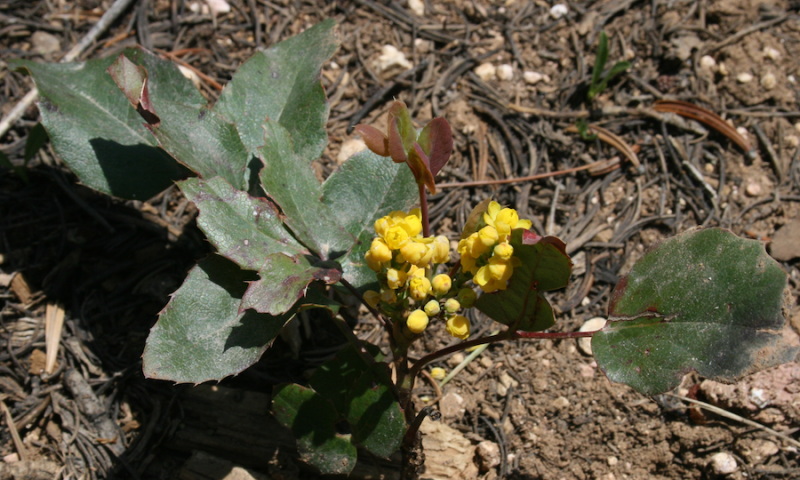 Oregon grape helps with internal housekeeping, an action herbalists traditionally called blood purifying. Blood purifiers or alteratives help clear toxins from a sluggish liver and lymphatic system and are used to clear up morbid conditions like cysts, boils, acne, and swollen lymph nodes. In this action, Oregon grape combines well with other alteratives like red clover, burdock, and yellow dock.

Michael Moore suggests that Oregon grape is a good remedy for people who have issues with protein metabolism and dryness. In Medicinal Plants of the Mountain West he states, “It is a useful part of any tonic formula for a person who has dry skin or scalp, sugar cravings, …an inability to sweat when physically active or feverish, a general preference for [yin foods], and adrenaline, food, drug, or lifestyle ‘rushes.’”

Various Native American tribes used preparations of Oregon grape root to treat stomach troubles, to prevent bloody dysentery, and as a blood purifier. They also used it for kidney and bladder problems and venereal diseases. In America and Europe it has been used to treat liver and gallbladder problems, jaundice, indigestion, diarrhea, urinary tract disorders, and gout, rheumatism, and arthritis.

A Remedy for Defensiveness 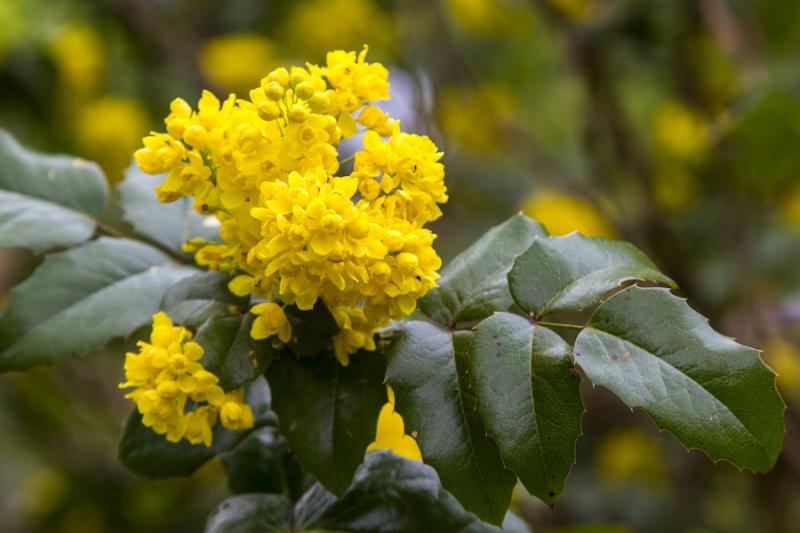 Oregon grape is also used as a flower essence and has a very interesting indication, which seems almost contradictory to its use for supporting the immune system. It calms down emotional defensiveness, helping a person to be more trusting.

The spiny leaves give the plant a prickly appearance and the person who needs Oregon grape as an emotional remedy anticipates conflict. They exhibit a type of paranoia or hyper defensiveness where they anticipate hostility and rejection from others. Oregon grape helps a person have a positive expectation of goodwill from others; it helps them feel included, rather than excluded.

One of my children had this tendency when they were young. They always expected to be left out, ignored, or otherwise mistreated. The moment I recognized the child needed Oregon grape flower essence was when I was serving soup to the kids at lunch. I had a bowl for each child and as I was filling the first bowl which belonged to a different child, they blurted out, “Don’t I get any?” It was like they were expecting the other kids to get soup and they wouldn’t get any. After a week on Oregon grape flower essence, this behavior stopped. 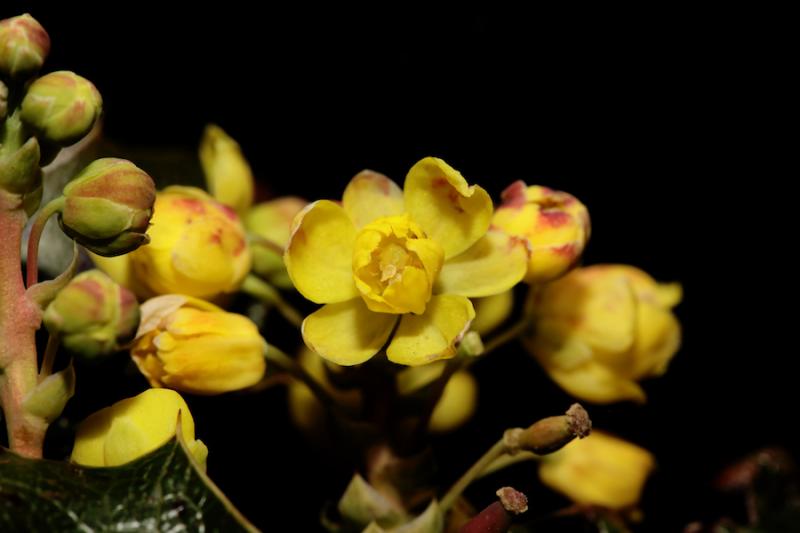 Michael Moore also made an observation about the use of barberry and Oregon grape that I find quite humorous. He said, “Somewhere in the United States is a secret school that rigidly trains landscapers of public buildings … to always plant Oregon grape or barberry around the town square ... law offices near courthouses seem to have the same landscapers, and foyers and tiny green spaces around the buildings are redolent with barberry or Oregon grape.”

I have noticed that he’s frequently correct about government buildings and law offices using these prickly, infection-fighting plants in landscaping. Are they projecting defensiveness in their choice of landscaping plants? Perhaps they just are acknowledging the hostile nature of court battles and other legal proceedings. Whatever the case, see if Moore's observation holds true in your town. If it does, then at least you know where you could find a source for these medicinal herbs in an emergency.