The Healing Properties of Evening Primrose

The many physical and emotional healing uses of evening primrose | November 29, 2022 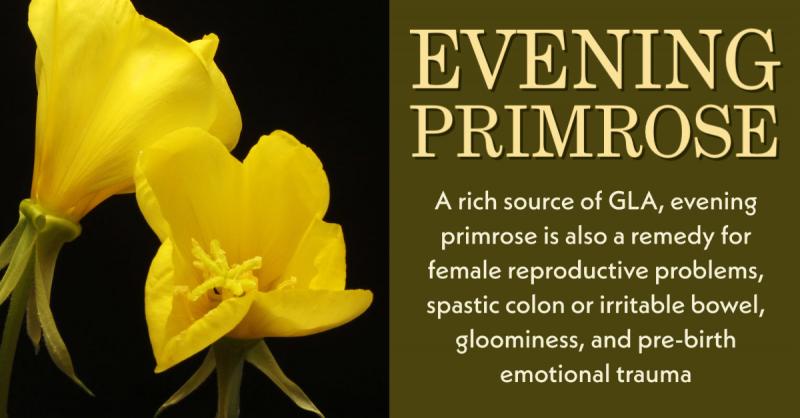 My earliest knowledge of field botany came directly from trying to identify plants in the wild. With no formal training in botany, and only relying on various field guides, even when I didn’t know the plant I was seeing, I gradually came to recognize members of various plant families. One of the families I learned to spot early on was the evening primrose family. Later, when I took a field botany course at the University of Utah, I learned the botanical language to describe the characteristics of this family, which I’ll explain later.

The most commonly used species from the evening primrose family is Oenothera biennis, the common evening primrose. It is native to eastern and central north America and is the species used for producing evening primrose oil. I'll talk about the oil first because it is the part that is most readily available. 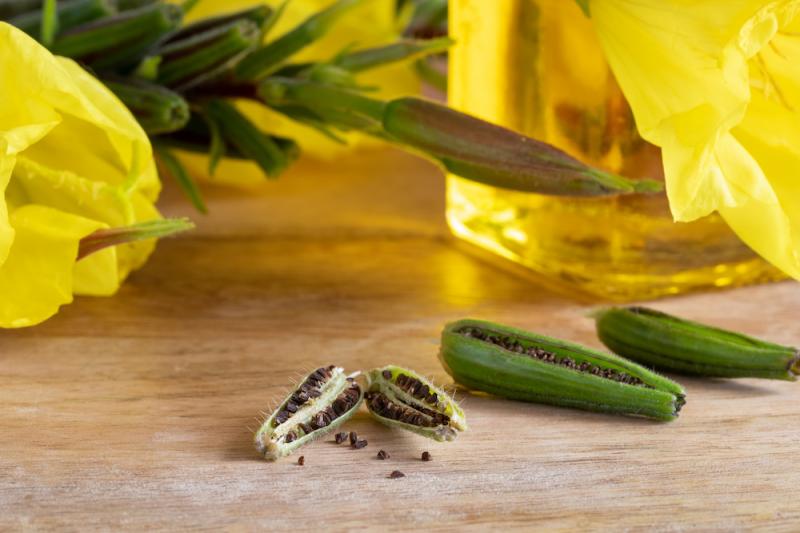 Evening primrose oil is derived from the seeds. Like nearly all seed oils, it is primarily composed of omega-6 fatty acids (linoleic acid) and contains only trace amounts of omega-3 fatty acids (alpha-linolenic acid). Most people have too much linoleic acid in their diets and too little alpha-linolenic acid. So why is evening primrose oil considered therapeutically beneficial?

While the body can make GLA from linolenic acid, conversion can be reduced in some people. For instance, deficiencies of vitamin B6, pantothenic acid, vitamin C, magnesium, and zinc can reduce GLA levels, since these nutrients are necessary in the conversion process. The use of alcohol, tobacco, and oils with saturated and/or trans-fatty acids can also block conversion. 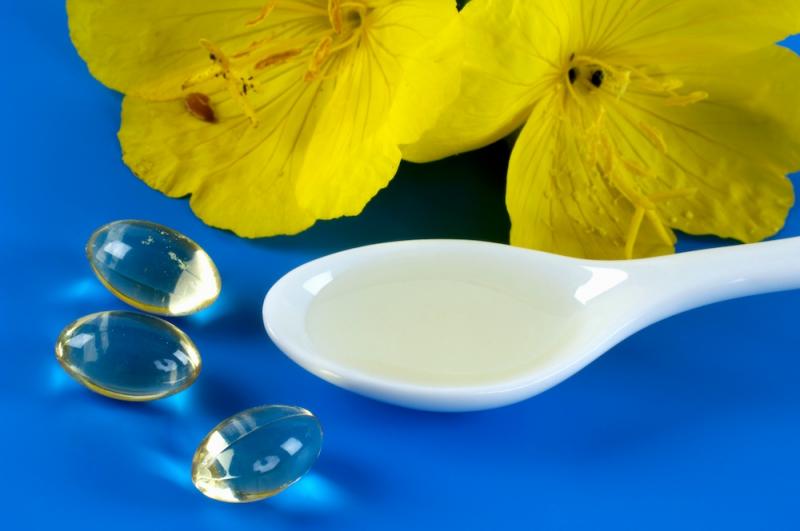 Evening primrose oil contains about 72% linoleic acid and 8-10% GLA. Other oils high in GLA include borage seed oil and black currant seed oil and all three oils can be combined to create a GLA oil supplement. Here are some specific conditions these GLA-rich oils may benefit.

First, they may be helpful for many types of skin problems, including eczema, psoriasis, rosacea, and vitiligo. They’re particularly helpful for dry, irritated skin conditions. Although the oil may be helpful when taken internally, it is even more helpful used topically with other soothing substances such as vitamin E and various essential oils.

A third potential use for evening primrose oil or GLA is for various neurological or autoimmune problems, including neuralgia, neuritis, epilepsy, multiple sclerosis, rheumatoid arthritis, and Parkinson’s disease. It also has been used for arthritis, alcoholism, cardiovascular disease, and schizophrenia.

It is vitally important to recognize that evening primrose oil (and even the GLA it contains) is not a cure for any of these conditions. It is only helpful if a deficiency of GLA is part of the underlying cause of these conditions. In all of them, it is likely that there are deficiencies of other nutrients as well as other causal factors. And, this is where the evidence-based model of botanical therapy falls short.

If I were to do a study on using evening primrose oil, by itself, on all of the health problems listed above, I doubt it would prove beneficial in most of them. It would probably be beneficial topically for some skin problems and maybe for PMS type C, but I doubt the study would prove it was good for anything else. Even in cases where it might be helpful, due to low levels of GLA, it would probably need to be combined with other nutrients and herbs to actually heal the body. That's why you always need to consider underly causes in any health problem, and not rely on just the disease name alone to make recommendations. 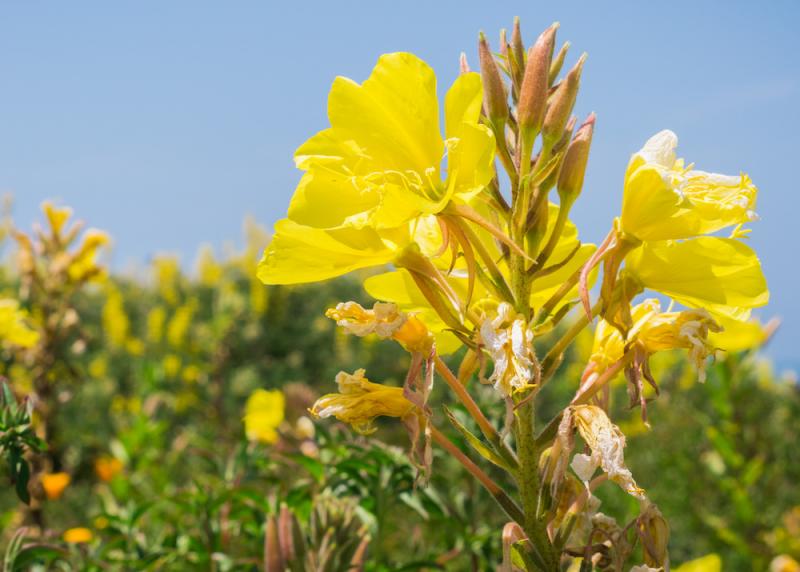 This brings us back to the evening primrose plant itself. It is helpful to look at the historical uses to understand how to use plants, because real people using the plant in real situations, provide us with the knowledge we need. To start it is useful to recognize that Oenothera biennis is not the only species in the Oenothera genus that is useful. Michael Moore includes it in a list of five species he used medicinally, the others being O. californica, O. elata, O. pallida, and O. villosa, in his book Medicinal Plants of the Mountain West.

I also found about ten other species of Oenothera used as food and medicine by native people in Native American Ethnobotany by Daniel E. Moerman. In addition, other members of the evening primrose family, including the fireweeds, found in the Epilobium or Chamaenerion genus (depending on which source you look at) have also been used medicinally. 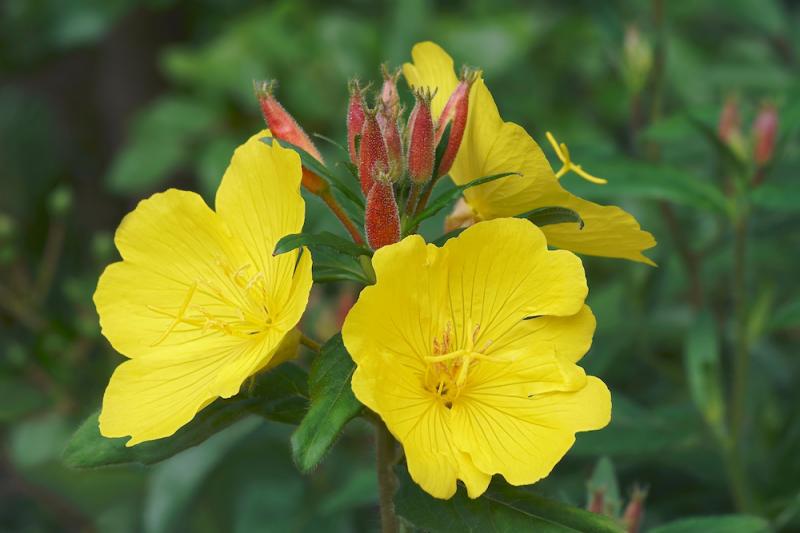 Michael Moore gives the following uses for all the species he listed (see above). First of all, he says that the chopped roots (and to a lesser extent the chopped leaves) can be simmered in honey to make a soothing, and slightly antispasmodic, cough remedy. It can also be helpful for asthma.

The plant also helps the digestive tract. It can be helpful for spastic colon, irritable bowel syndrome, destruction of the Peyer’s patches, and pain in the abdominal or pelvic region involving the liver, intestines, or female organs. It can also help clear congestion from the liver and lymphatics. You can harvest the whole plant before it produces seeds and use it for these purposes.

Michael Moore also states that the evening primrose plants contain significant quantities of potassium nitrate one of the compounds known as saltpeter. It is one of the major components of gunpowder and is also used as a fertilizer. Therapeutically, the compound can help to lower blood pressure, as it would help produce nitric oxide in the body. It’s also being used in toothpaste for sensitive teeth.

Moore also suggests it’s pretty easy to gather the seeds if you find a large stand of evening primrose. The seeds can then be blended into smoothies, just like you would flax or hemp seeds. The root is also edible as a boiled vegetable, especially in the first-year plants. The leaves can also be cooked for food.

The Signatures of Evening Primrose 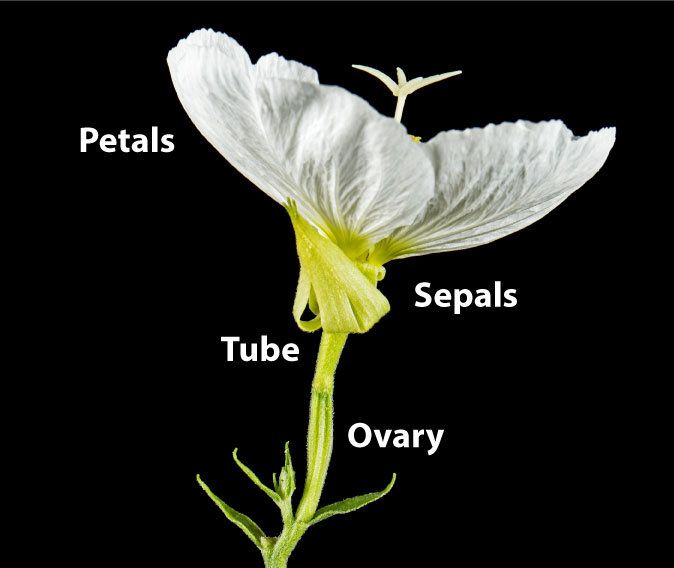 As previously indicated, I’ve been fascinated with the flowers and flower structures in the primrose family. Two particular things stand out to me.

First of all, the flowers tend to bloom in the evening, hence the name of the family. In the first species with which I became familiar, the desert evening primrose (Oenothera caespitosa pictured below), I observed the large white flowers bloom in the evening, persisted through the night into the following day, and perish the following day, turning slightly pink in the process. This is a common blooming pattern in the family.

The second interesting thing about the flowers is their structure. As shown in the picture, the ovary is inferior, meaning it is located in the stem below the flower. It also looks like the stem holding the flower is very long, but in reality, there is a tube formed by the fused sepals and petals, which appear to fan out farther up the flower. The sepals point backward, and the petals open forward. The pistil, the female part of the flower, has a very long style (a filament that runs from the part that receives the pollen down to the ovary). It travels through the length of the whole tube.

The Energetics of Evening Primrose 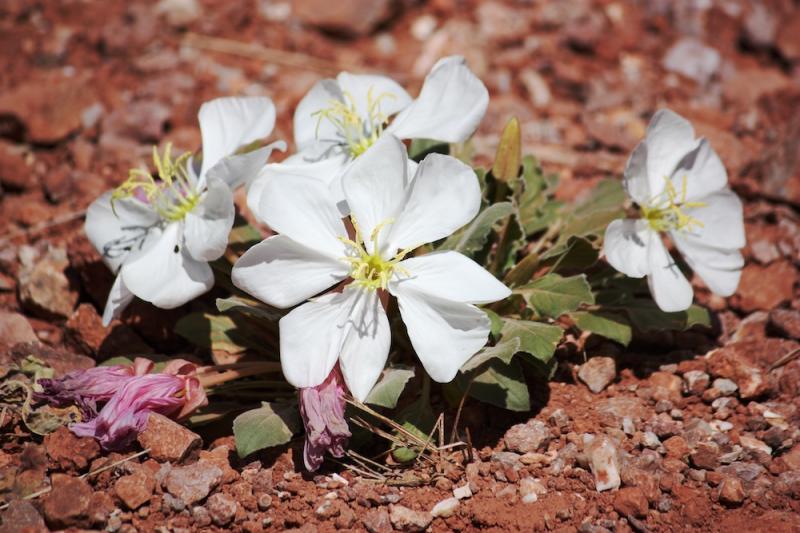 These signatures not only support the use of evening primrose as a remedy for female problems like PMS, but they also suggest these plants can be used as flower essences for surviving dark times. They could help a person bloom (thrive) during the dark times and persist through those difficulties until the good (light) times return.

The eclectic physician John Scutter said that evening primrose was indicated in people with an expressionless face, a dirty hue to the skin, and a gloomy or despondent character. This goes along with the idea that the plant helps a person through a period of darkness in their life.

Both of these evening primrose flower essences are used to help heal issues with one's mother, which often trace their origins to the womb. As I’ve done emotional healing work with people, I've been surprised how many emotional wounds go all the way back to the womb. For instance, if the child was conceived through an act of violence or debased lust, this emotionally impacts the developing embryo. If the resulting pregnancy is unwanted by either parent, but especially the mother, this also creates emotional problems.

Typically, such children grow up to be adults who feel unwanted and rejected by others. This feeling of being unwanted can result in difficulty committing to relationships, a fear of being a parent, or repression of the ability to experience normal sexual attraction.

As I’ve told students in emotional healing classes, “If you feel like your own mother didn’t want or love you, then how could anyone else?” Think of the saying that someone is a person that “only a mother could love,” and you’ll understand what I’m talking about. In my experience, these wounds from a lack of feeling loved and wanted in the womb can also lead to feeling unworthy of what you want in life and a tendency to try to please others to prove that you deserve to be loved.

Evening primrose flower essence helps heal these feelings caused by painful emotions absorbed from the mother in the womb. It draws these emotions into the open where they can be dealt with and healed. It restores the ability to be open to others and form deep, committed relationships. Dune primrose flower essence is more focused on the mother who wants the child but was living in difficult circumstances while pregnant, such as poverty, war, and other issues that make one feel uncertain about the future. This causes problems where the person has an inner feeling that there is always a lack of something in their life. They don't fully trust that they are mothered or cared for in the world.

I hope you’ll experiment with various evening primroses, not only for physical ailments but also for food and emotional healing. I also hope I’ve inspired you to be observant of plant structures and forms (basic botany), as this helps you learn how to read the signatures of plants and understand on a deeper level how they can help you to heal.