The Ugly Duckling of Respiratory Remedies

Horehound may not be pretty or taste good, but it's very effective at relieving coughs and respiratory congestion - November 17, 2020 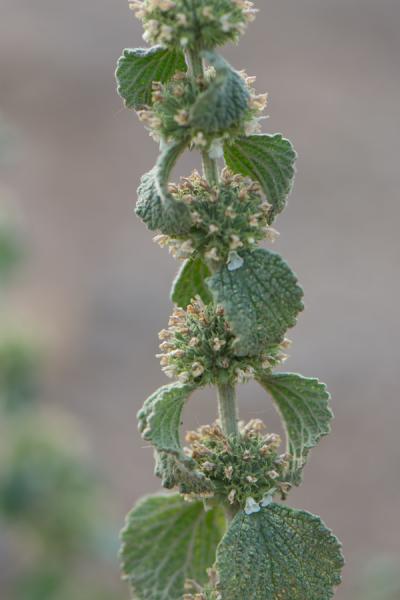 Native people have said that plants grow where they are needed, so if you have persistent pesky weeds in your yard, it might be because you need them for your health problems. It’s an interesting idea, especially since one of the weeds that tends to grow wild on my property is horehound. I never planted it, but it pops up here and there every year.

Given my long history of respiratory problems and the fact that horehound is a very effective expectorant and decongestant, it would seem that the plant is offering to be of help. What validates this further is that as winter approaches I often develop a tickle in my throat that leads to a dry, non-productive cough. A medical doctor told me I had reactive airway disease, which means that my lungs overreact to the cold, dry air. And, according to the Australian naturopath, Dorothy Hall, these are specific indications for horehound.

When mucus gets trapped in the sinuses or lungs, the cilia can’t move it out of the way. Horehound helps the mucus get moving again by loosening it and activating the cilia.

At the same time, horehound is stimulating the lungs and sinuses to eliminate mucus, it’s also soothing the irritation. It’s an amazing herb for helping ward off winter respiratory ailments and eases coughing and congestion in bronchitis, asthma, postnasal drip and chronic sinusitis.

Horehound is part of the mint family, but unlike most mint remedies which are more aromatic and pleasant tasting, horehound is very bitter. I learned just how bitter it was when I first tried making horehound cough syrup.

A few years ago I decided to make use of my horehound volunteers and make some cough syrup, modifying a recipe from Medicinal Plants of the Mountain West by Michael Moore. I pick a handful of horehound leaves (the dried leaves work too, but I think the fresh leaves work better) and put them into a pint of boiling water. I turned down the heat, covered the pan, and allowed the leaves to simmer for 20 minutes to make a horehound decoction. I remember tasting the liquid after straining it. It was really very bitter.

Anyway, after straining it, I returned the decoction to the stove and simmered it until it was reduced to one cup. I then added two cups of honey. So, I’ve got a mixture that’s 2/3 honey and 1/3 horehound extract. You might guess that would make it taste pretty sweet, after all, honey is sweeter than sugar.

But, guess what? It didn’t. The stuff was still too bitter for me to take, and I usually don't mind taking something that tastes bitter. So, I decided to add 1/2 cup of freeze-dried sugar cane juice to sweeten it up. It was still very bitter. And I remember thinking, how am I going to take this stuff, let alone get anyone else to take it?

Well, the secret was in Michael Moore’s recipe. He said to add the juice of one lime. So I did. To my amazement, the flavor was now tolerable. Lesson learned, sugar is not always the antidote for bitterness. Anyway, I finished the syrup off, as Moore suggests, by adding ½ cup of brandy as a preservative. (It also adds some flavor.)

The resulting cough syrup worked great for me. Moore’s recipe also calls for powdered slippery elm or marshmallow root, which would thicken the syrup a little, but I left that out. While you could use just raw sugar, honey makes it a better cough remedy because it is a mild expectorant and decongestant.

After successfully making a couple of batches of cough syrup, I decided I’d try to use more of my free horehound by making some horehound candy. When I was a kid I remember a major department store in downtown Salt Lake celebrated their 100 year anniversary by converting their display windows into little shops like those that would have been seen in pioneer days. One of these was an old-fashioned candy store and one of the things they sold was horehound candy.

I wouldn’t call horehound candy sweet (just like the cough syrup). It has an odd bitter flavor, but I liked it even as a kid, which again points out our instinctive attraction to remedies that are actually good for us. So, I decided to try my hand at making it.

I’d never tried making candy before, but the starting process is similar to making the cough syrup. You make one cup of horehound decoction and then add a mixture of sugar and corn syrup. I used freeze-dried sugar cane juice for the sugar. Honey won’t work very well in this case.

You then have to cook the sugar and horehound mixture to the hard crack stage (about 300 °F), stirring and watching it carefully. That’s the tricky part for an inexperienced candy maker like myself. But, once it reaches the right stage, you pour the mixture into candy molds. Or, if you don’t have them (like I didn’t), you pour it onto a cookie sheet and cut it into squares.

When the candy cools you can dust it with powdered sugar or slippery elm powder so it isn’t so sticky. I wound up making a whole bunch of odd-shaped pieces. They weren’t very attractive, but they did work as a cough remedy. If you don’t want to go to all that trouble, you can still find horehound candy available for sale.

Other Uses for Horehound

Horehound contains some compounds that have a mild tonic effect on the heart. It helps to normalize the heart rhythm. It’s also a bitter digestive tonic. It stimulates digestive secretions and appetite.

According to Matthew Wood in his book, The Earthwise Herbal, London herbalist Paula Grainger says that horehound also helps to balance female hormones. It reduces high androgen levels in females. This can cause abdominal weight gain in women going through menopause. It can also cause infertility in women of child-bearing years by interfering with the function of the fallopian tubes.

A hot tea made from horehound will help to ward off colds and bring down fevers. The decoction also acts as a mild laxative. It may also ease emotional sensitivity and correct a depleted condition of the nervous system.

Horehound isn’t a very attractive plant. It looks rather unkempt. That's why many people would consider it a weed. Also, it’s also not the most pleasant-tasting herb. Dorothy Hall calls it an herbal “ugly duckling” with a “hidden, swan-like soul.” But, given its valuable medicinal nature for me, I don’t care if this weed grows in my yard. I know it’s only there to help me.