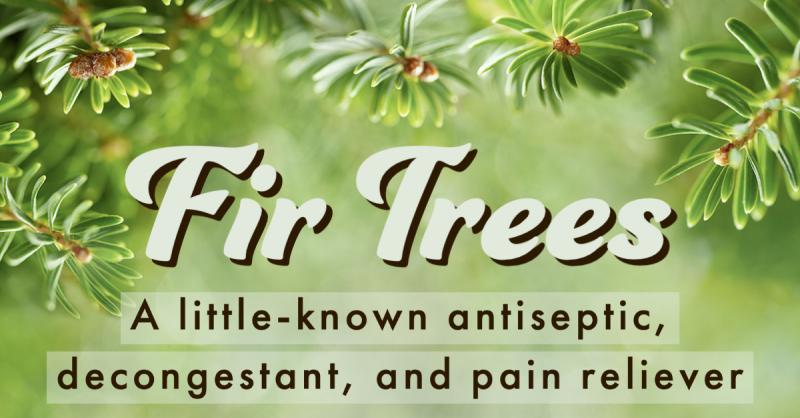 In the wintertime, there aren't many herbs available in the wild. So, if there is an emergency situation during the winter and you need to wildcraft medicines, evergreen trees will be an essential resource. Specifically, I'm thinking about pine trees (Pinus), spruce trees (Picea), and fir trees (Abies), all of which can be found growing throughout North America both in the wilds and as landscape plants.

I've already written about the medicinal and survival value of pines and will take up spruce trees at a later date. Today, I'm going to talk about fir trees. But first, let me give you some tips about identifying evergreens I learned in my first field botany class that I took at the University of Utah fifty years ago. This is important because I've seen all sorts of mislabeled photos identifying fir trees as pines or spruces and vice-versa. So if you don't know what to look for it is easy to be misled. So here's a mini botany lesson. 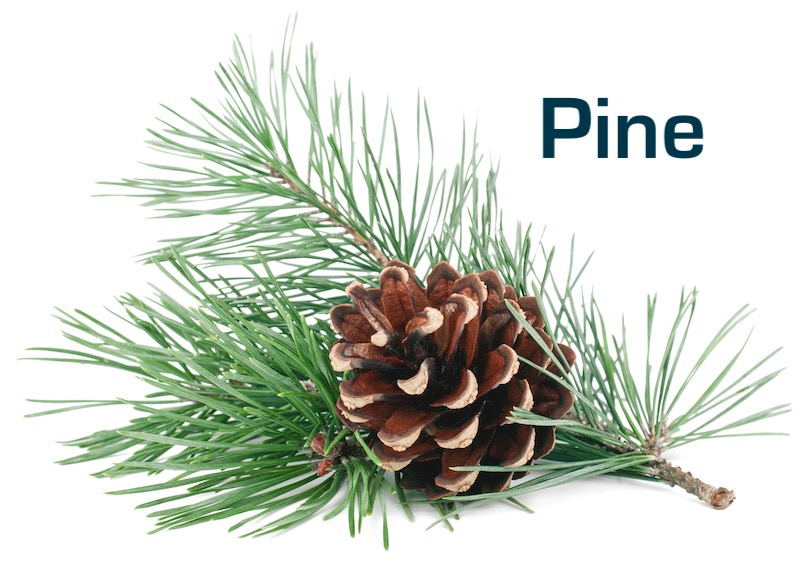 A Quick Lesson in Evergreen Botany

Pine trees have nettles in bundles with 1-5 needles in each bundle and they have fairly large cones. Look for the little brown bract at the base of the needles that surround the bundles.

Nettle length and the number of nettles in the bundle are important clues to telling pine species apart.

You can learn more about using pine in the article, The Winter Survival Supermarket. 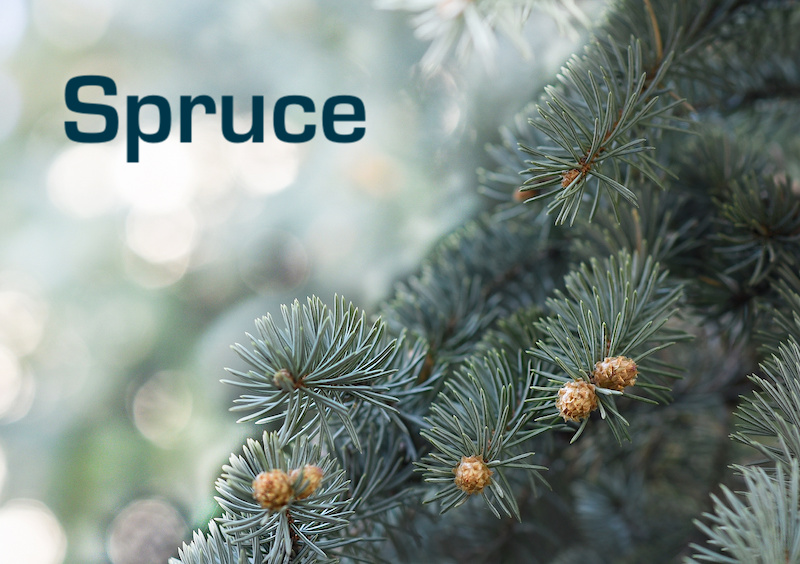 Spruce tree needles are singular, stiff, and sharp. They tend to encircle the branch as well. The genus name, Picea, reminds me that the needles are sharp or piercing. If you gently grab a branch on a spruce tree the needles will poke you.

Spruce cones are smaller and they also hang down instead of standing erect. A popular spruce tree for ornamental purposes, which my wife has planted several of at our new home, is the Colorado blue spruce, pictured right. 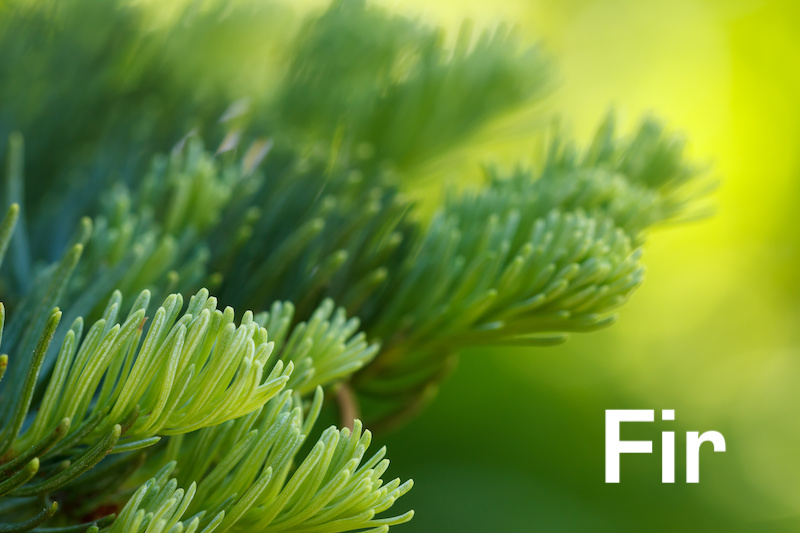 Fir tree needles are also singular, but they are flat and usually don’t completely surround the branch. So, if you gently grab a branch of a fir tree, it doesn't poke you like a spruce tree. In fact, you can run your hand forward over the branch and pet it, like you'd pet the fur on an animal. So, there's the main clue, you can pet firs.

The cones are also erect like pines, but smaller. A common fir growing where I live is the white fir (Abies alba), which has a whitish streak running down one side of the needles. 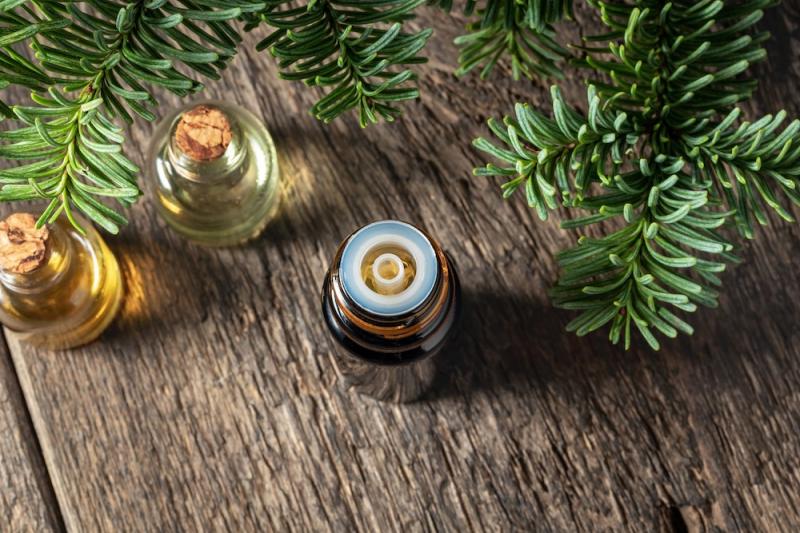 The major commercial use of firs in modern herbal medicine is for their essential oil. The white fir (Abies alba) is a common source of the oil, but other species are used as well.

Fir oil is analgesic and can be applied topically to ease muscle or joint pain. It also stimulates circulation in the area where it is applied. Being disinfectant and antimicrobial, it can be applied topically to infected skin or inhaled to fight respiratory infections. Like pine, it can act as a decongestant to ease coughs and bronchitis. However, it is contraindicated in asthma and whooping cough as it tends to increase respiratory spasms.

Although fir oil is nonirritating and can be applied topically in neat (undiluted) form it is not an oil for internal use. So diffuse it, smell it, use it in steam inhalations, or apply it topically.

Like all essential oils, fir oil effects a person's mental and emotional state. Fir essential oil helps to calm the mind, easing feelings of anxiety and stress. It is one of those oils that is both grounding and uplifting at the same time, promoting a sense of inner wholeness and well-being. It’s actions like these that probably helped to develop the Christmas tree tradition. In the cold, gloomy winter months people would bring evergreen branches like pine, fir, and spruce into their homes to lift their spirits and brighten their mood. They would also help to ward off infections in tightly closed spaces. 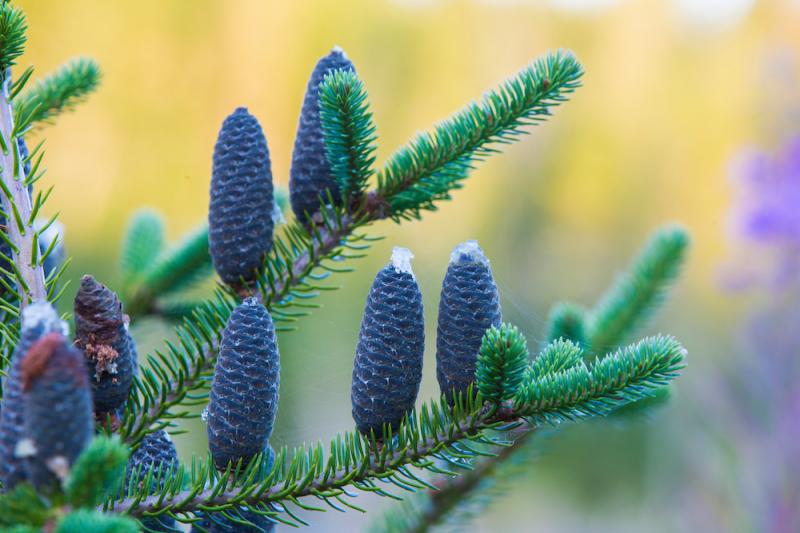 I’ve often felt that fir trees had medicinal value, but didn’t see much about them in popular herb books. Digging a little deeper I have learned that fir can be a valuable medicine, but it’s rarely used in modern herbalism.

For example, the balsam fir (A. balsamen pictured right) was widely used by Native Americans and early European settlers. The resin or pitch has been applied topically to treat burns, cuts, and sores. It was also used on the chest for congestion. The resin is similar to pine resin (or pine gum) and can be used to make ointments or salves to heal the skin. It is antiseptic and vulnerary.

Native Americans used tea made from the needles and bark of various fir species both internally and topically. A decoction made from the bark and pitch is reported to act as a stimulant laxative. However, I’d be cautious using it internally because I really don’t have a lot of information about its safety or actions in the body. I would be willing to experiment with under the right circumstances.

Here are some safe ways you could use the fir trees growing in your area. You boil some fresh fir branches with the needles in water and inhale the steam for respiratory problems. You can make an infusion or decoction and use it topically in a compress or fomentation for injuries or joint pain. You could also gather the pitch and tincture it in alcohol or dissolve it in warm oil to use as a topical remedy.

These are all simple ways we can use a widely available medicinal plant. But I've rarely seen this kind of practical knowledge put to use. I believe one of the problems facing modern society is that we've lost a lot of traditional wisdom concerning the herbs around us and their uses. It’s why I believe it is important to get to know different remedies and explore their uses, especially the ones local to your area.