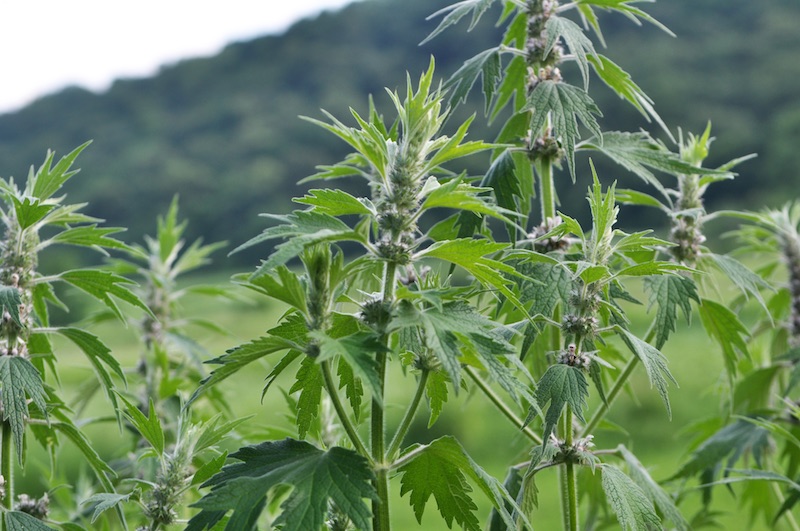 Being stung as a child didn't leave me with a very favorable impression of stinging nettles. So, when I learned that it is actually an edible plant in my early teens, I was surprised. It is also surprising that despite identifying many other medicinal plants, like yarrow, it was the first wild plant I ever tried to use.

I’d been studying edible and medicinal plants for over a year, but I was afraid to actually try any of the plants because I was afraid I’d poison myself by taking something I hadn’t identified properly. So, when someone got stung by nettles on a camping trip, I figured there was no mistaking that as an identification.

I carefully picked some and boiled the young plants in two changes of water, just like my field guides suggested. I was surprised to discover that I actually liked them. They reminded me of the steamed spinach or beet greens my mother cooked sometimes. A little butter, lemon juice, and salt was all they needed and I had successfully eaten my first wild edible plant.

That same day I had the spiritual epiphany that eventually led to me becoming an herbalist, which was the belief that God created herbs to heal all the diseases with which mankind could be afflicted. I’ve since come to recognize that herbs are only part of the solution to disease, as diet, lifestyle and mental/emotional factors also play a role, but I still find them to be one of our most powerful allies in preventing and recovering from disease. 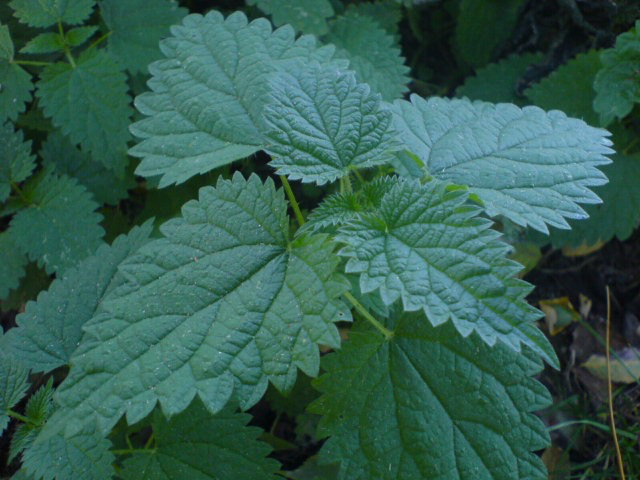 Nettles is a powerful medicinal food, meaning it can serve as both food and medicine, a distinction that is often blurred in the plant kingdom. It is one of the most nutritious plants on the planet containing numerous vitamins and minerals. It’s an especially good source for minerals, including selenium, iron, magnesium, zinc, boron, iodine, chromium, copper, and sulfur. It also has the highest source of protein of any leafy-green plant. About 16 free amino acids have been found in the leaves and the plant contains starches and sugars, too.

For this reason, one of my primary uses for nettles over the years been to as a nourishing tonic to help people get the minerals they need for healthy bones, muscles, joints and blood.

Nettle leaf a key ingredient in one of my favorite “do-it-yourself” herbal formulas, a blend called Herbal Minerals that also includes other mineral-rich herbs like alfalfa, horsetail, and oatstraw. The recipe is found in Modern Herbal Dispensatory. I’ve had great experiences with this blend in helping people heal bones, teeth, joints, muscles, and other tissues, as well as acting as a general health tonic for young children and pregnant women.

Nettles is also part of a pregnancy tea formula I got from some Utah lay midwives. It’s a simple blend that helps expectant mothers have a healthier pregnancy and easier delivery and keeps them from getting anemic. The recipe is equal parts red raspberry, alfalfa, and nettles, to which you can add a smaller amount of peppermint for flavoring. It is made as a strong infusion using about 4 heaping Tablespoons of the blend per quart. Pour boiling water over it and steep for 20-30 minutes.

Along the same line, nettles is one of the best herbs for raising iron levels in anemia. I once helped a woman with a severe case of anemia with nettles and marshmallow, another herb with a high amount of iron. I recommended she purchase nettles and marshmallow in bulk and use them as food. She simmered them as a decoction and blended them together so she could drink all the herb material too. Her iron levels returned to normal in a few weeks. 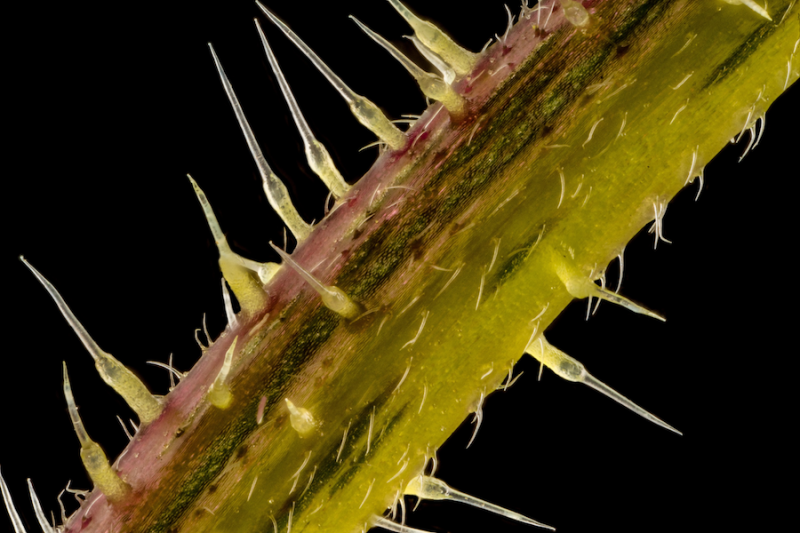 The Sting in Nettles

Of course, to get those nutrients you have to get past the stings, which are caused by pointy hairs called trichomes. When these hairs puncture the skin, they inject the neurotransmitters histamine, serotonin, and acetylcholine, and formic acid, the same substance that makes ant bites hurt. Get stung enough and you’ll get a rash or urticaria, which has the same Latin root as the genus name for the plant, Urtica. Urtica means to burn and urticaria is a burning, itching rash. If you do get stung, the remedy I usually use is to apply mud, which is typically close at hand because nettles like moist soil. Fortunately, when the herb is dried or cooked, the sting is removed so you can consume it safely.

Another of my favorite uses for nettles is to ease allergic reactions. It reduces histamine reactions in the body, thereby reducing allergic reactions. This is a homeopathic-like use for them, or you could say a “hair of the dog that bit you” remedy because nettles contain histamine. I like to combine them with eyebright and goldenrod for this purpose. 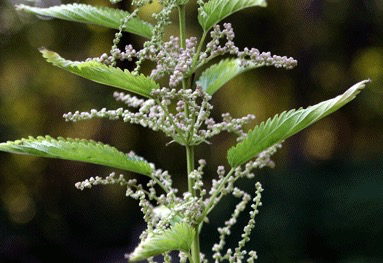 Nettles is one of the herbs covered in one of my favorite books, The Book of Herbal Wisdom, by Matthew Wood. He talks about the fact that nettles love to grow downstream from the outhouse, septic system, or feedlot. In other words, they thrive in soil rich in animal waste. They are able to process this waste and help decompose it. In fact, many gardeners have found that adding nettles to the compost pile helps the compost break down faster.

What this translates to in the body is nettles' ability to rid the body of waste from protein metabolism, specifically uric acid. It helps the body metabolize protein more efficiently and helps a person get rid of gout, arthritis, and muscle pain. It can also help clear up skin conditions like psoriasis and eczema.

Australian naturopath Dorothy Hall paints another interesting picture of nettles in her book Herbal Medicine. She says that nettles helps the person who has low blood pressure, looks a bit pale, and feels sluggish and tired. They sigh a lot and look like they’re always tired because they just aren’t getting good blood flow. This property may also affect a man’s ability to perform, too. 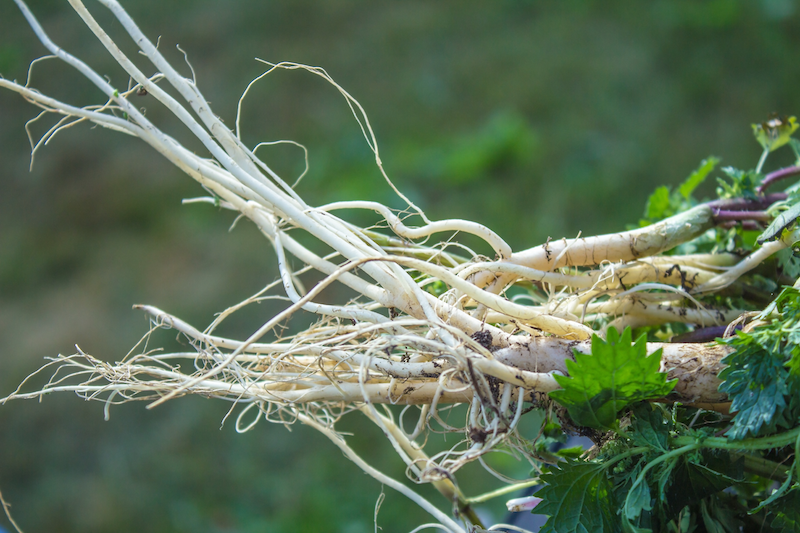 So far, all I’ve talked about are the uses for the aerial parts or leaves. There are other useful parts of the nettle plant, too. For starters, the nettle root is a prostate remedy for men. It helps to shrink a swollen prostate and improve urine flow.

Nettle seed, on the other hand, is a kidney/adrenal tonic, which can help when the kidneys are starting to lose function. That’s a remedy I learned from David Winston and I’ve used a tincture of nettle seed, or a blend of the root, leaf, and seed, to support weak kidneys ever since. It can actually help to prevent (and even aid in reversing) progressive renal failure. Nettle seeds are used to promote the function of the adrenal glands after long-term stress, elevating energy levels, and increasing overall health.

I think the best way to use nettle leaf isn’t to take it in capsules, but rather to actually eat it. You can buy a pound of dried nettles and add some to a soup or other dish where you could use green leafy vegetables. For prostate problems I recommend nettle root be used as part of a prostate formula containing other herbs for the prostate like saw palmetto.

However, for weakened kidneys or progressive renal failure, I’ve also given nettle seed tincture (or a blend of the leaves, root and seeds) along with a Chinese herbal formula that acts as a kidney qi tonic. Its Chinese name is Jian Gu, which means strengthen water. I also recommend the person cut down on heavy proteins, eat more vegetables, and drink more water. I’ve seen some very good results with this program. 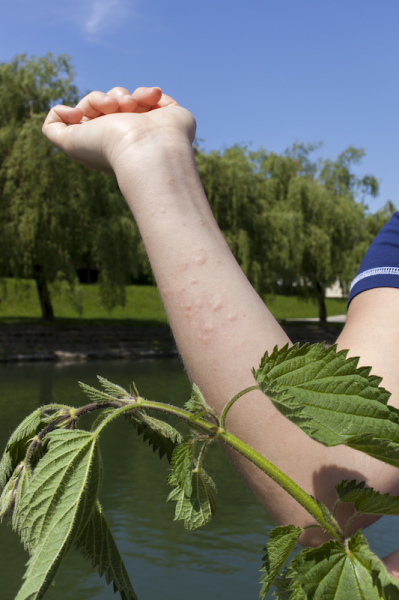 Nettles as an Emotional Remedy

Which brings me to the emotional healing qualities of nettles, which I learned from Amanda McQuade Crawford, one of my favorite herbalists. When I was going through a very rough period of my life she offered to do a consult for me and one of the herbs she recommended was nettles. She told me that the nettle plant has to protect itself because it has so much to offer in the way of nutrition and that often, people who are very giving and generous will have many people wanting to take advantage of those qualities.

Nettle is not being mean when it stings you. It’s just protecting itself. Many years ago I told my sons when we were on a camping trip that nettle wouldn’t hurt you if you approached it with love and gentleness. I then watched as they lovingly caressed a nettle plant for 5-10 minutes telling it how beautiful it was and how much they appreciated it. They never got stung. Even though I had told them this was possible, it impressed me that they actually did it.

So, for all you nurturing people out there, nettles help you remain nurturing by helping you those who would take advantage of you and avoid them. It also helps you if you need to get out of unhealthy, toxic, and abusive situations, especially if they are an underlying cause of physical problems like allergies, fatigue, foggy thinking, weakened immune system, and joint pains. Like yarrow, many people in the healing field need this energy and would probably benefit from taking nettles, just like I did.