An Important Herb for the Wounded Warrior and Healer | June 11, 2020 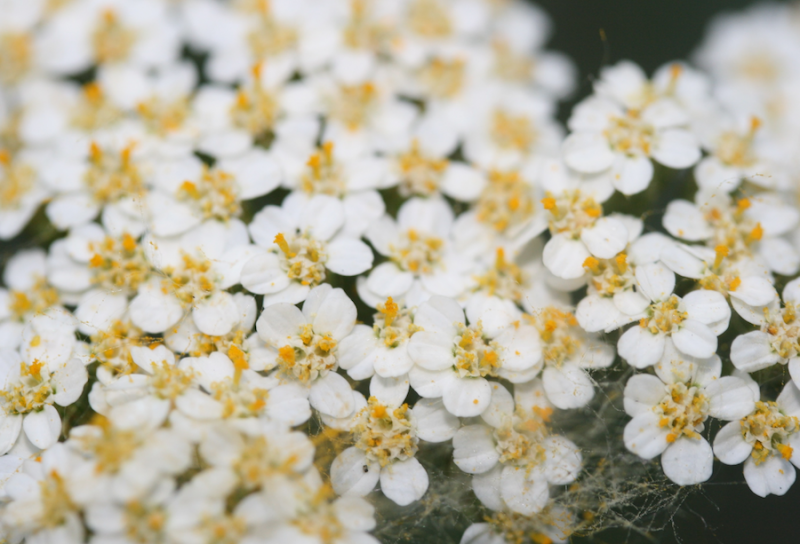 Over my years as an herbalist, I've had the pleasure to learn about hundreds of different herbs and use them to help heal myself and those around me, but there is one herb that has a special place in my heart. It was the first herb I identified, the herb that got me interested in edible and medicinal plants, the first herb I tried to use, and the herb that got me interested in flower essences, as well. I once read that native healers often had a plant that was their special medicine plant. If I have one, it’s yarrow.

Yarrow is a wound healer. It’s Latin name, Achillea, has reference to Achilles, a hero of the Trojan War, who was considered the greatest of all the Greek warriors. Achilles was killed by Paris, who shot him in the heel with an arrow. The legends say that Achilles was invulnerable except for his heel because, when his mother, Thetis, dipped him in the River Styx as an infant, she held him by one of his heels. The traditions also say Achilles soldiers carried the dried leaves of yarrow to staunch battle wounds. 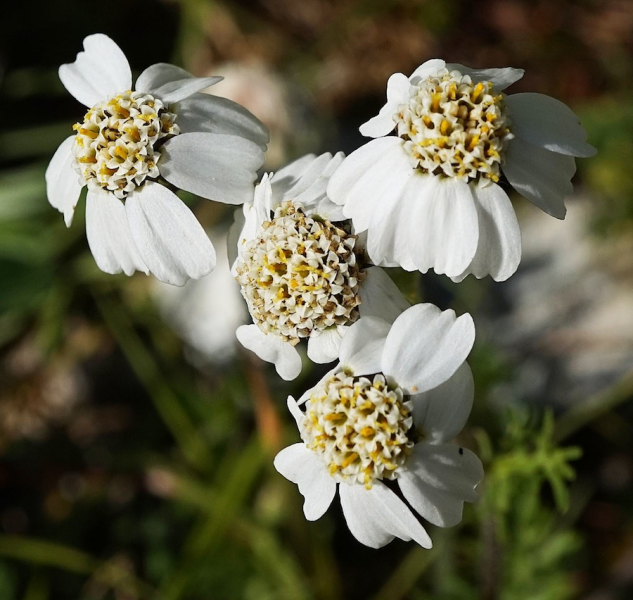 Yarrow is a styptic, so it helps to stop the bleeding, but it also has analgesic and disinfectant properties, so it also eases pain and helps prevent infection. And, it wasn’t just the Greeks who used yarrow for this purpose. It was also used by the Native Americans and the Chinese. This means yarrow has a history of use for healing wounds for over 2,000 years on three continents. 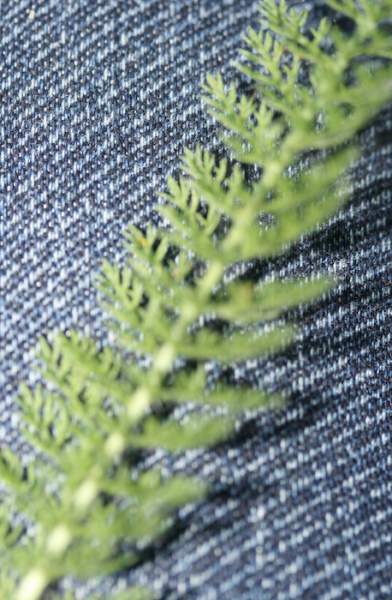 The most commonly used species of yarrow in herbal medicine is Achillea millefolium. The millefolium refers to the finely divided, fern-like leaves as shown in the picture. Herbalist Matthew Wood says that these deeply incised leaves show that yarrow helps “cuts to the bone” and wounds that hit arteries and spurt blood. He told a story at an herb conference once about a man who cut his leg with a chain saw and in desperation noticed some yarrow growing near the woodpile which he crushed and packed into the wound. It helped to stop the bleeding and possibly saved his life.

In a less dramatic story, I tripped while chasing down some kids as a camp counselor for the YMCA in my late teens and gashed my elbow. We were on an outing, a long way from the camp, and as I lay there I realized we hadn’t brought a first aid kit. I saw some yarrow leaves in front of me and thought, “now is as good a time as any to try this.” So I grabbed some, crushed them up, and held them against the wound like a bandage.

The bleeding stopped rather quickly and so did the pain. By the time we got back to camp and I went to see the camp nurse, she told me, it looked like it wasn’t much of a cut. However, I knew it had been, and was amazed at how much the yarrow helped. 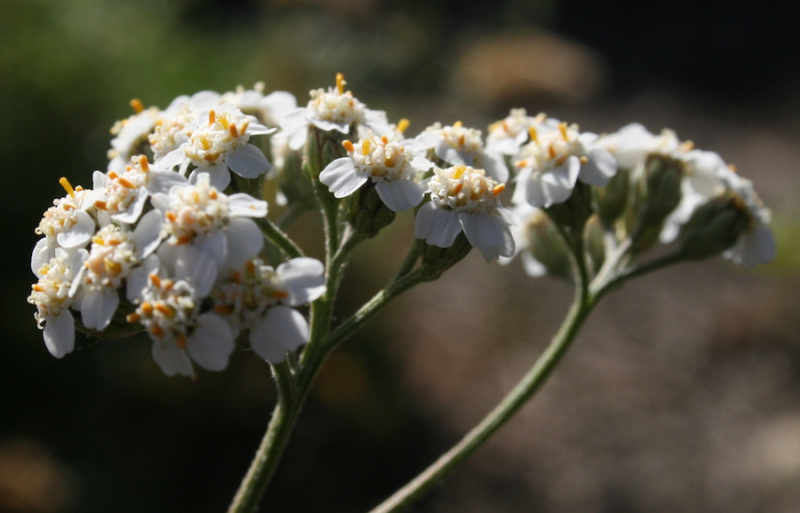 Yarrow isn’t just for healing wounds, however. It’s also a great remedy for fevers and can be helpful for colds and flu where there is a fever. In this case, you use the flowers, which are more aromatic and make them into a hot tea. I also tried this when I was in my late teens, but the tea tasted so nasty I couldn’t make myself drink it. Only later did I learn that mixing it half and half with peppermint made it much more pleasant to take without diminishing its effectiveness.

Yarrow is a diaphoretic, which means it promotes perspiration. That’s how it helps to break the fever and lower the body temperature. Sweating is the traditional way you treat colds and flu in herbal medicine. I find it very effective. 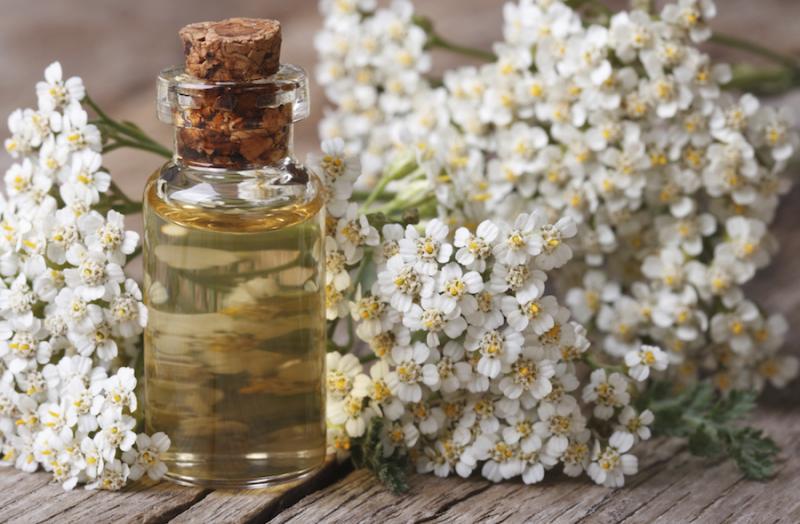 In fact, that’s how I figured out my favorite remedy for colds and flu. I was in the mountains with my family and I found an area where there was some wild mint growing along with yarrow. The elderflowers were also in bloom. I knew that Edward Shook had talked about how the herbalist Henry Box had saved many people from the 1918 flu epidemic with elderflower and peppermint as a febrifuge (fever reducer) and diaphoretic. So, I decided to mix the three. I extracted the three herbs in glycerin, using a technique I call the sealed simmer method.

The final product smelled and tasted good and was very effective in helping me fight acute illness in my kids. I called it Children’s Composition. The recipe and the instructions for making sealed simmer glycerites can be found in the book I co-authored, Modern Herbal Dispensatory. 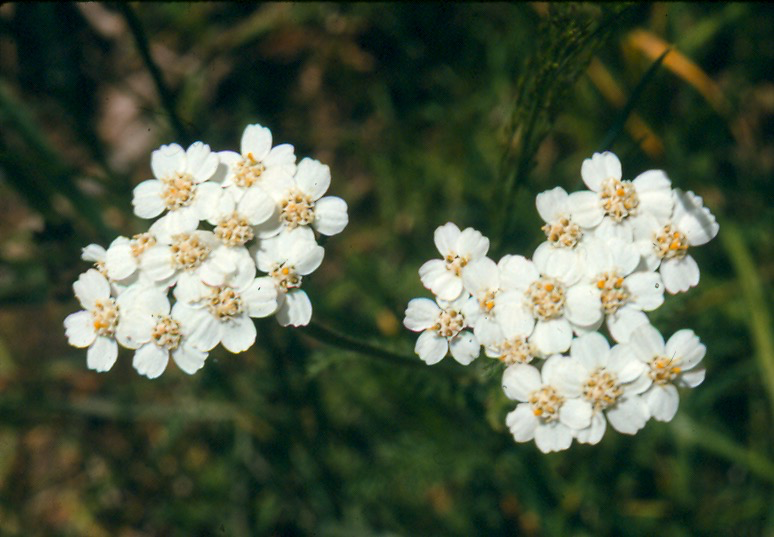 Yarrow also helped me learn the importance of understanding that different parts of a plant have different medicinal uses and things often get copied in books without a full understanding of how an herb is used. I had read that Native Americans chewed on the leaf to ease toothache, but it wasn’t until I learned that the young purple tips of the leaves coming out of the ground in the spring contain a topical anodyne similar to clove. It has a numbing effect when you chew on them. The mature leaves don’t work. 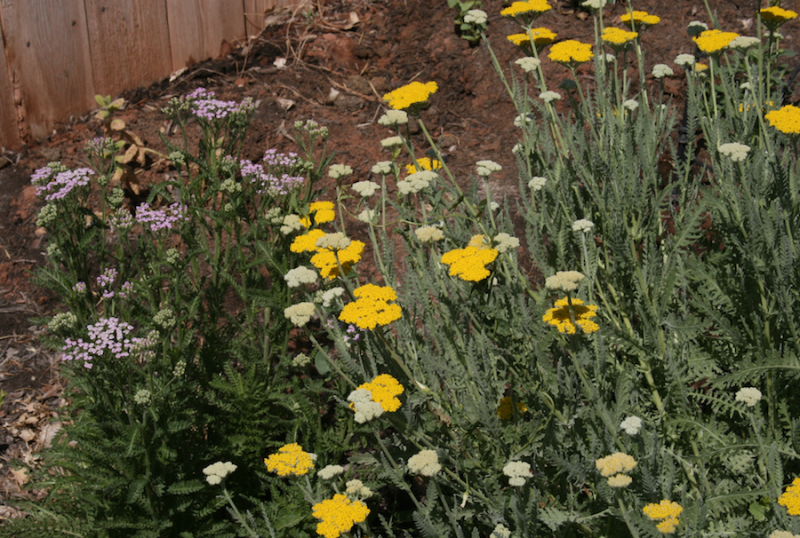 Yarrow is a beautiful ornamental and comes in several colors besides the white blossoms of Achillea millefolium there are cultivars that are rose, pink, lavender and red. There’s a species with yellow flowers, Achillea filipendulina. I was always attracted to the various yarrows and loved growing them in my garden (pictured right), but I never understood why yarrow was so appealing to me until I discovered yarrow’s indications as a flower essence.

According to FES Services, yarrow flower essence is for people who are overly empathetic. They feel responsible for other people’s problems and are constantly trying to rescue others. They can start to feel overwhelmed by all the problems in the people around them that they can’t fix. Yarrow helps a person create healthy boundaries, recognizing what is their responsibility and what is not.

I recognized immediately that I fit that profile and started taking yarrow flower essence. Within a short time I stopped feeling responsible for other people’s choices and decisions. I remained empathetic to the plight of others, but recognized they had to do their own work. I can’t do it for them. 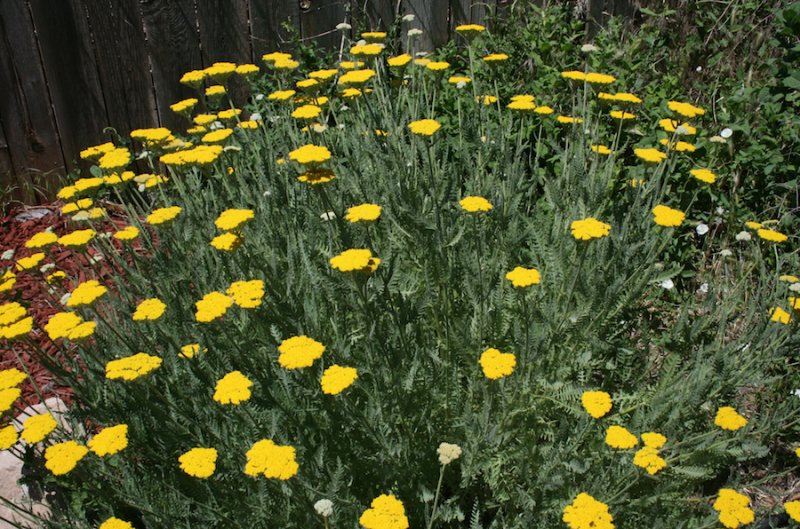 Pink yarrow flower essence is similar, except that it works on the person who is an emotional sponge and soaks up the emotions of those around them, having a hard time distinguishing their feelings from the feelings of those around them. I often mix the white and the pink yarrow flower essences and use them for people in the healing field who are overly empathetic like I was. So, as Matthew Wood says, yarrow isn’t just for the wounded warrior, it’s for the wounded healer as well.

Yarrow has many uses and here are just a few more. It’s helpful for heavy menstrual bleeding and uterine fibroids. It can act as a bitter digestive tonic. I’ve crushed yarrow leaves and applied them to an insect bite to take down swelling, too.

Yarrow has been with me since the beginning and to this day I love seeing yarrow growing wild when I’m out hiking. I also love growing it in my garden, both for the beautiful flowers and for its medicinal use. It reminds me of how thankful I am for the knowledge I've received about the wonderful remedies the Creator has put on this earth for us.