The Many Signatures of Mullein

Best known as a soothing, moistening lung remedy, mullein is so much more - September 29, 2020

Mullein is a great plant to demonstrate the doctrine of signatures. Its physical characteristics and growth patterns are all clues to its many uses.

To start with, mullein has large, soft, fuzzy leaves which according to tradition are a signature for lung tissue. And so it shouldn't be surprising that mullein has a long history of helping relieve chronic lung conditions, especially when the lung tissue is dry and irritated.

Mullein leaves are soft, slightly mucilaginous, and salty, which suggests that they soothe and cool irritated tissues and help to hydrate them. This matches my experience where I've found mullein to be indicated whenever there is a dry, irritated cough.

Mullein helps to moisten dry lung tissue, loosen hard mucus and reduce respiratory inflammation. It’s one of the major remedies to consider with COPD, emphysema, chronic asthma, and a dry, hacking cough. It is mild and slow-acting, so you can take 6-8 capsules or more daily over a period of months to help heal and rebuild damaged lung tissue.

It is also helpful for sinus congestion, particularly in people who are too much “up in their heads” and think too much. It helps clear both the mind and the sinuses. It is useful for sore throat, pleurisy, pneumonia and tonsillitis. It is also helpful for bleeding in the lungs, especially when used with horsetail. 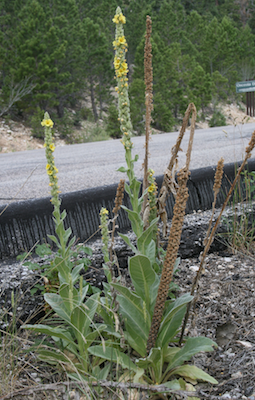 Along with clearing the lungs, mullein also clears the lymphatics. Dr. John Christopher combined mullein with lobelia to relieve lymphatic congestion and shrink swollen lymph nodes. It can also help soothe the vocal cords when one’s voice is a little hoarse.

Mullein has a very upright growth pattern, suggesting the idea of someone standing up very straight and tall, which is another signature for the plant. Matthew Wood discovered mullein leaves help to lubricate and heal joints. It is helpful for moving broken bones that are hard to set back in place and has been helpful for easing nerve pain from pinched or irritated spinal nerves.

The root, in particular, is helpful for the spine. Mullein is a biannual, which means that the first year it spends its time collecting energy and storing it in the root. The second year, it sends up tall sturdy stalks, blooms and produces seed. In the following year, the rust-colored remains of the stalks will still be standing (as in the picture on the right) showing the plants endurance and strength. To use mullein to help create a strong, straight back always use the first year roots that are harvested in the fall. 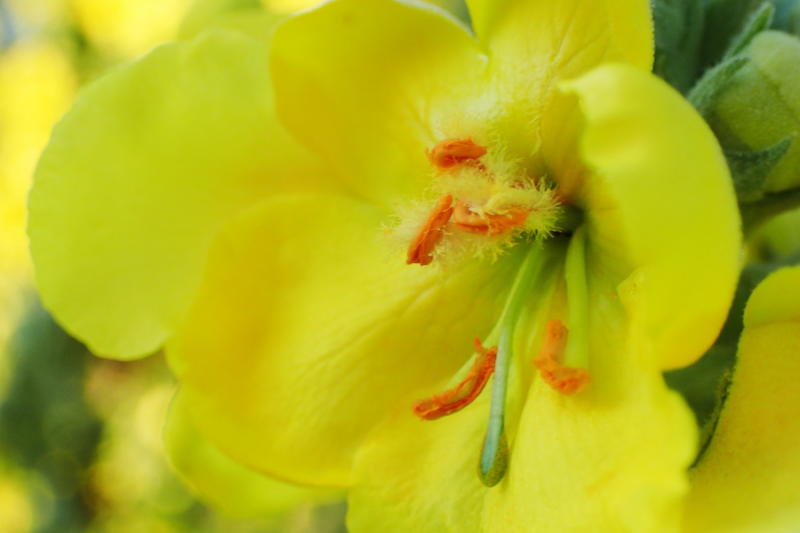 The other major signature for mullein is its ear-shaped blossoms. Mullein flower oil is a great remedy for earaches. It can be used alone or in combination with garlic oil and/or St. John’s wort oil. You can also add a little lavender or cajeput to it to make it even more effective for ear infections.

To make mullein flower oil, gather fresh mullein flowers and cover them with olive oil for 14 days, shaking daily. Strain out the flowers and store the oil in a cool place away from direct sunlight. To use the oil, simply drop some of the warmed oil into the affected ear, while lying on your side. Wait five minutes and then place some cotton gently into the ear to keep the oil from running out.

The various signatures of mullein come together in its use as a flower essence. Mullein is a remedy for helping people stand upright in their integrity. It gives them spine and helps them to hear the voice of their conscience and be true to it. It decongests their character to remove weakness and indecision, helping them speak up for what they really believe, despite social pressure . It also helps them stop lying, both to themselves and others. 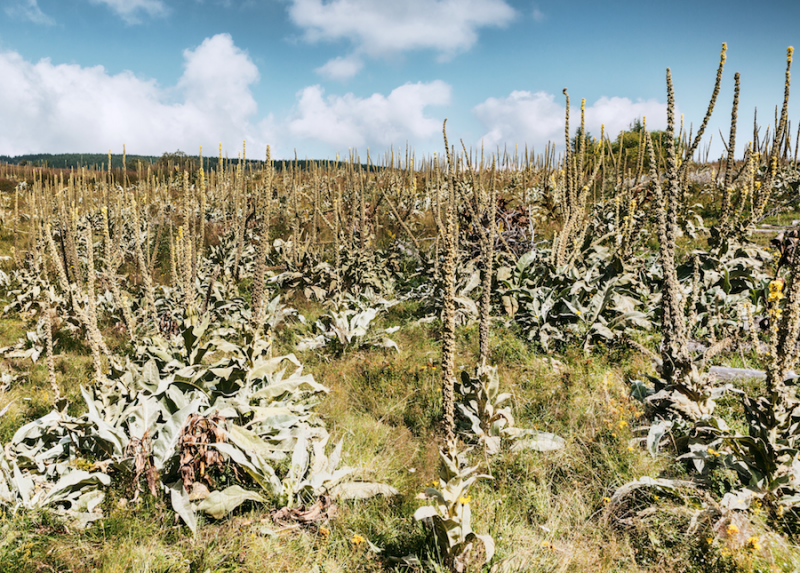 Mullein stalks have been used to make torches and the leaves have been used as a natural toilet paper. Mullein seeds are mildly narcotic (numbing to the central nervous system) and have been used to catch fish. When thrown into slow-moving waters, the fish experience a temporary stupor and become easier to catch.

Native Americans mixed it with tobacco and other herbs for ceremonial smoking, which might have helped reduce the irritating effects of the tobacco.

Mullein is one of those plants that was introduced to North America by European settlers that has become a weed. It likes to grow in waste places such as vacant lots, the sides of roads or along old railroad tracks. This is a final signature for mullein. It’s a gentle healer, trying to undo the damage done to the environment and to our bodies. So next time you spot mullein growing in some abandoned or neglected area, try to take a moment to look at this plant and contemplate its many signatures and uses.