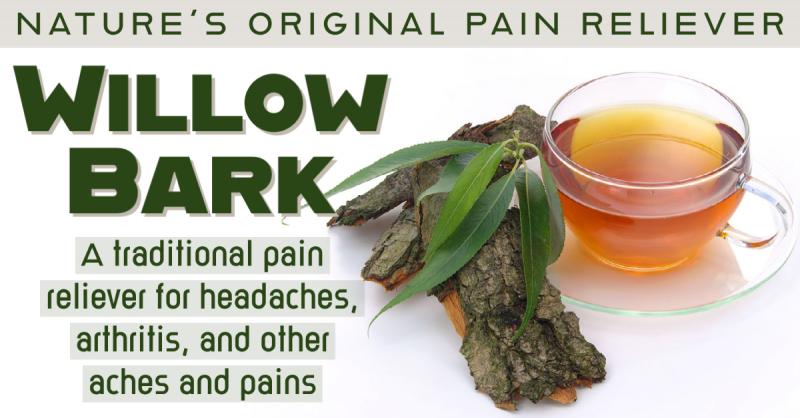 What to do about pain has always been one of my major concerns. Modern medicine affords people so many options for pain relief that people take it for granted that they can take something to ease pain. But what if these medicines weren’t available? How could we help ease the suffering of others?

My interest in herbs began with an interest in outdoor survival and emergency preparedness. So when I write about the health benefits of herbs, the emergency preparedness aspect of herbalism is always in the back of my mind. In the event of war, economic breakdown, supply chain collapse, or any other major disaster, it’s good to know what remedies you can harvest that grow near where you live. You can use this knowledge to help yourself and to help serve others. With this in mind let's talk about one of nature's original pain relievers, willow trees.

The Origin of Aspirin

Willow bark is one of the oldest medicines for pain. It has been used on several continents for thousands of years. In 1838, a compound called salicylic acid was isolated from willow bark. Salicylic acid was found to reduce inflammation, ease pain (especially pain associated with arthritis or headaches) and bring down fever. Later, this led to the creation of aspirin, acetylsalicylic acid, an acetylated form of salicylic acid.

I like to think of willow as a natural aspirin but it’s really not that simple. Herbs work holistically, the health actions of herbs aren't due to just one constituent. It is likely that willow bark contains multiple analgesics and anti-inflammatory compounds besides salicylates. Furthermore, lots of herbs contain salicylates, including various species of poplars (such as cottonwoods and quaking aspen), birch trees, meadowsweet, black cohosh, clove buds, and wintergreen. Each of these herbs has analgesic qualities, but because they contain a variety of other compounds, they all have their unique properties and uses. So, let’s look at willows from that perspective.

The Many Varieties of Willows 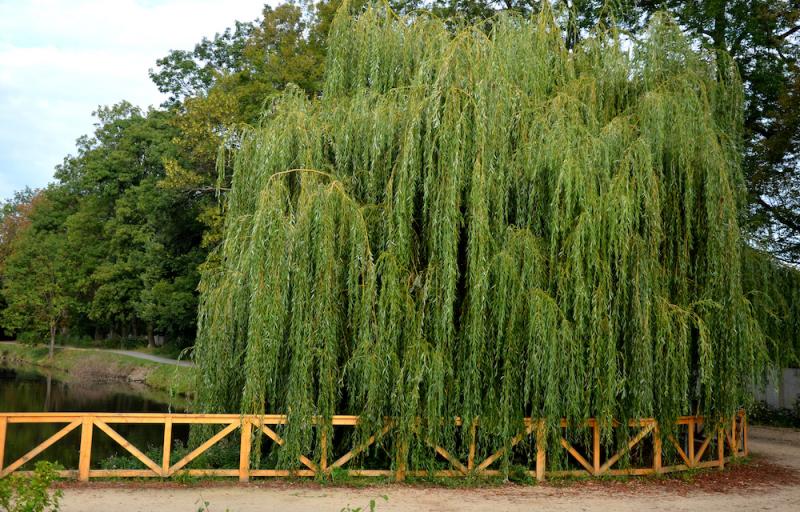 There are about 400 species of willows (plants in the Salix genus) worldwide, which grow as trees or shrubs. As far as I know, they all produce varying amounts of salicylates. The most commonly used species in the herb trade is the white willow (Salix alba), a tall, graceful tree native to Europe and naturalized in North America. Another species used in commercial herbalism is the black willow (S. nigra), a smaller tree native to North America. A Utah Flora, my botanical guide to Utah plants, lists 42 different species growing in Utah, along with a number of sub-varieties of these species.

Since various willows, such as weeping willow (S. babylonica) and pussy willow (S. discolor) are often grown as landscaping plants, you can probably find at least one species of willow growing near you. To find wild species, look where there is moist soil along the banks of rivers or lakes. I frequently find them growing along riverbanks where I live.

The highest content of salicylates is found in the inner bark of these plants, but they are also found in the leaves and the leaf buds. If you’ve ever taken an aspirin tablet, you would be familiar with the slightly astringent and bitter taste it has. So, it is possible to identify parts that can be useful for medicine by tasting the leaves, twigs, and buds of various willows and seeing which ones have the strongest aspirin-like flavor. 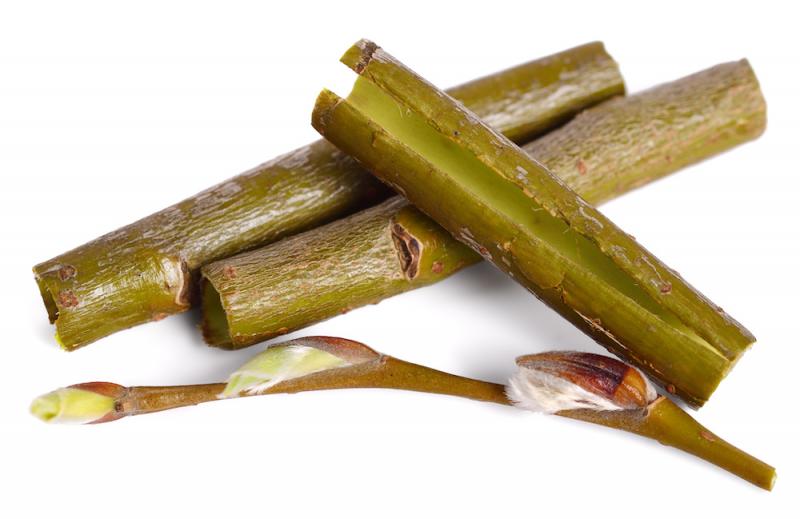 Willows also contain tannin, which makes it mildly astringent. For analgesic purposes, you want less astringency and more aspirin flavor, but if you want to use willow topically on injuries, a more astringent taste is desired. Applied topically, poultices of willow bark or crushed willow leaves can be used to stop bleeding, reduce swelling in insect bites and stings, ease pain in injuries, and promote faster healing.

In the research Mark Pederson conducted for his book Nutritional Herbology, he discovered willow bark was very high in magnesium, a mineral that helps to relax muscle spasms and promote energy production in the cells. He also found willow bark high in calcium, zinc, manganese, niacin, and phosphorus. This is why willow might be better than aspirin for easing pain as it also may assist in the healing process.

The primary use for willow, of course, is to reduce inflammation and relieve pain. It can be helpful for headaches, but it won’t help to cure them. It will also bring down fever like aspirin. But, because fever is part of the immune response that helps the body fight infection, I don't recommend doing this, particularly if the fever is 102 degrees or less. It’s much better to use diaphoretics (which induce sweating) for fevers. Reducing fever with willow, aspirin, or other analgesics, actually makes it harder for the body to fight the infection.

As an analgesic, I think the best application for willow is for arthritis and muscle pain where the body is stiff and inflexible. This is one of the oldest uses for willow and matches the plant’s signatures very well.

You see, willow trees have strong wood, but the branches are also flexible. Willow can bend without breaking. This is the ideal condition of the structural system. It needs to be strong, yet flexible. If a structure is too rigid, it breaks rather than bends. If it is too flexible, it can’t remain strong when it is stressed.

The strong, yet flexible, nature of willow has made it an ideal material for weaving baskets or making structures like a sweat lodge. That’s because you can bend the willows to create the structure without breaking them. Once the green willows are bent into place, they harden as they dry, forming a useful basket or other structure. I also think willow is especially helpful for arthritis and stiffness in the body because of its emotional indications.

Willow as an Emotional Remedy 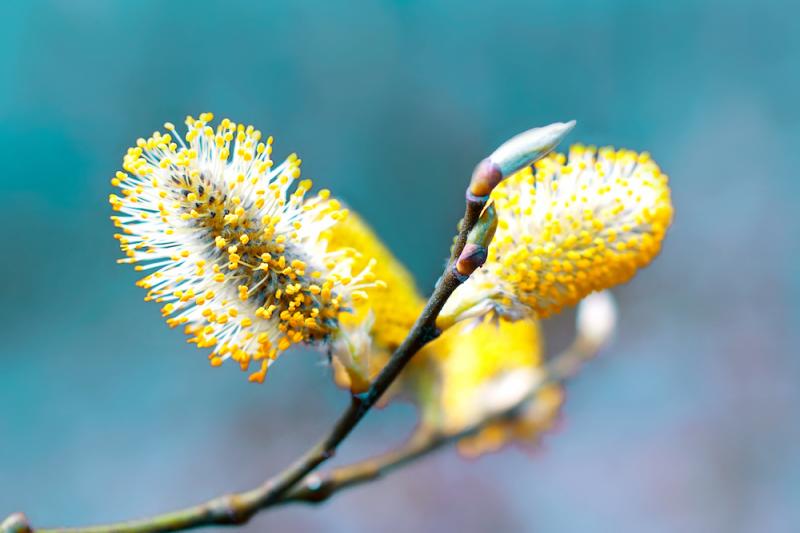 A species of willow growing in England, Salix vitellina, was one of the original 38 Bach flower remedies. Bach said that willow helps people who have become resentful, inflexible, or bitter about life. I think most willows would have these same emotional indications, including the pussy willow pictured right. I find it interesting that we tend to be both physically and emotionally flexible when we are young, but as we grow older, we tend to become more rigid in both mind and body.

Is it possible that the stiffness and pain we experience as we age is partially due to the accumulated hurts and body armor we acquire from growing resentment and bitterness over the emotional wounds that have been afflicted on us? Willow is a plant that exhibits the quality of grace, which is tied to that combination of strength and flexibility. When we are grateful, we can overlook the faults and shortcomings of others, forgive people for the hurt they’ve caused us, and accept life with its ups and downs, progresses and reversals, good times and bad.

Willow flower essence can help a person go with the flow, like the water it tends to grow near. It can also help foster a more spring-like nature. A spring flexes and then returns to its original form. Joints need to do this after injury and emotions need to do the same after trauma, betrayal, and loss. Willow can help us heal from injury to the physical body that causes us to develop swelling, stiffness, and pain, but it can also help us heal from injury to our souls, which would otherwise become rigid, dogmatic, unforgiving, and stubborn. It helps us forgive and move on. 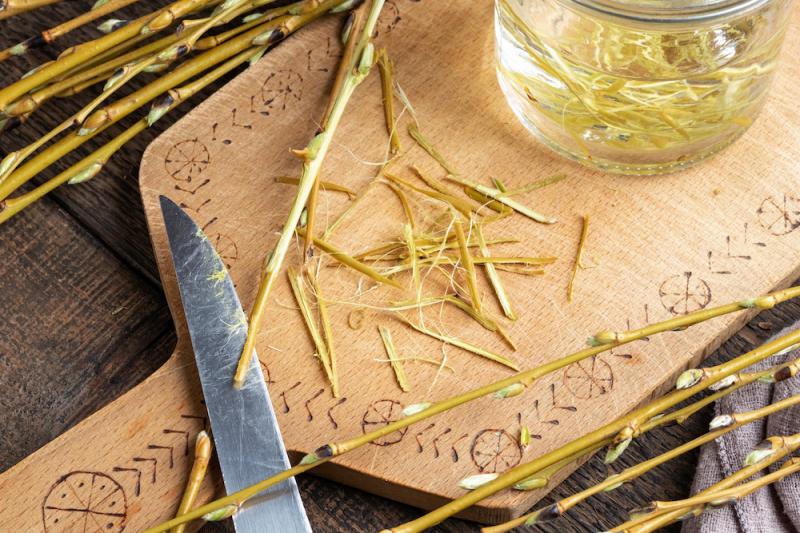 If you harvest some of the smaller, flexible branches, you can strip them of their bark and allow it to dry. The dried bark can be powdered and put in capsules and the dried or fresh bark can be made into a tea, decoction, tincture, or glycerite. You can also use the fresh leaves to make teas or poultices.

For headaches, take 30-40 drops of the tincture every 10-15 minutes until you obtain relief. For other types of pain take 40-60 drops every hour until the pain subsides. You can also take 2 capsules of the bark two or three times daily for arthritis or other chronic pain. However, I think it’s better to use willow bark in combination with other analgesics and anti-inflammatories for the best results. You can combine it with herbs like boswellia, mangosteen, yucca, and turmeric for chronic pain.

Willow bark may thin the blood, so you want to use caution with people who are taking blood thinners. Like aspirin, it can aggravate ulcers, so don’t use it if a person has weak digestion or a tendency to ulcers. Still, willow bark is much less likely to cause these problems than aspirin.

Some people are also sensitive to salicylates, which are also found in small amounts in unripe fruits and other foods. If you have bad reactions to aspirin, avoid willow bark as well. The article, Salicylate Sensitivity: Major Symptoms and What Foods to Avoid, talks about salicylate sensitivity and what foods are high in salicylates.