The Magic of Medicinal Mushrooms

The Magic of Medicinal Mushrooms is only available to members of Steven Horne's Member program. 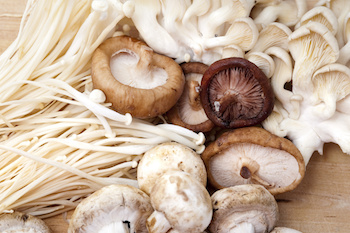 Mushrooms are most commonly thought of as simply food. Few people recognize what powerful medicines mushrooms can be, but today’s scientific research shows that over 270 species of fungi have therapeutic value.  This confirms the thousands of years of traditional use for mushrooms in herbal medicine, most notably in traditional Chinese medicine (TCM).

Mushrooms can also be hepatoprotective, which means they protect the liver (and other organs) from damage from environmental toxins. They can lower blood pressure and cholesterol to benefit the heart and circulation, too. Some even have calming effects on the nerves.

Medicinal mushrooms contain a number of bioactive compounds, including triterpenoids, proteins, and complex polysaccharides such as beta glucans. In dried form, tonic fungi are composed of about 80% polysaccharides, 10%-15% protein, 2%-3% oil, and 2%-6% minerals and other compounds. Medicinal mushrooms can be important sources of B vitamins such as riboflavin, folate, thiamine, pantothenic acid, and niacin. They also provide trace minerals such as selenium, copper and iron.

In this Sunshine Sharing we’ll introduce you to eight different species of medicinal fungi that can boost your immune system, help you cope better with stress and otherwise improve your health.